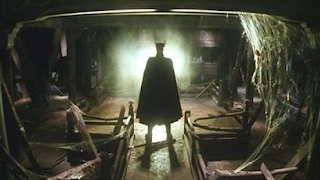 Tokyo: The Last Megalopolis might seem like an odd recommendation especially when I spend most of this piece talking about how little of it I actually liked. It's a strange movie that doesn't really satisfy as a whole yet manages to push some very specific buttons of mine in some very satisfying ways.

As expected from a translation of a movie based on part of a series of books the plot is a little hard to decipher. From what I can gather an ancient evil is being summoned by a long dead M. Bison-a-like named Kato and it threatens to destroy the burgeoning new city of Tokyo. The movie makes this seemingly simple story utterly confusing as the film plods along. Its narrative is hard to penetrate, its two-hour plus running time a challenge not to try. So why write a review saying you should go out and watch it? Well what it gets right it gets really right. So much so I can actually see myself giving it a second viewing at some point in the future.

I love theatrical horror. Horror that doesn't always need to be horrible, or scary, but can depict a nightmarish plane of lurid imagery. From Universal to Bava, stopping off at Hammer on the way, I've always been more captivated by colour soaked mists and expressionistic shadows than a guy in a dirty apron hacking things off women. This is precisely why I love The Keep so much: not because it's a great story but because it takes me to a phantasmagoric world associated with horror merely because it's too dark to call fantasy. 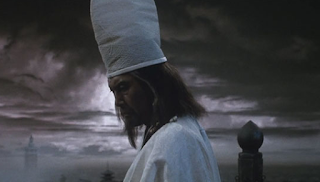 And Tokyo has a lot in common, atmosphere-wise, with Mann's spectral wonder. Rich with stylised light and heavy on colour the film poses horror as a weird sub-reality in opposition against the normal hues and tones of the every day drama scenes. Whenever the narrative drained and my interest threatened to dry up I'd be confronted by an image so tuned into my specific aesthetic proclivities I could have sworn I was watching my favourite movie of all time.

A women in traditional Japanese dress running through a shower of sparks while in pursuit of a kidnapper, a pulsating mound - its cracks bleeding light into the night sky, a destroyed city washed in nuclear orange, any scene involving the maniacal Kato, all images I will never forget despite having no real recollection of what narrative threads connected them. There is also a shit-ton of stop motion and a robotic train for crying out loud. 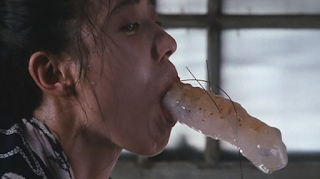 Above all else I felt like I was watching a Lovecraft movie. Not in the superficial tentacles and libraries way, but because it showed us glimpses of a ghastly world bigger than we could comprehend. A world that sometimes emerged in small personal ways and sometimes in apocalyptic ways. And it is important not to ignore the scale and ambition of the movie. It reaches for epic and through incredible production value often achieves its goal.

It's slow, po-faced and incoherent yet scattered across this mess is some really evocative imagery that won't leave my brain. If you have the same weirdly specific tastes as me you might find Tokyo: The Last Megalopolis worth a try.