Santo and the Vengeance of the Mummy (Rene Cardona, 1971) 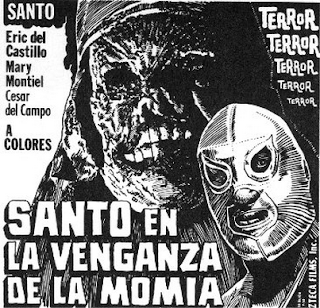 Many years ago I came into possession of a lost map charting a perilous course through unknown lands to the tomb of an ancient King and a wealth of priceless treasures. Despite countless offers of support from qualified scientists and historians I took the one man I new would have the requisite skills to make the endeavour a success: WWF wrestler Ravishing Rick Rude. Many people thought this choice was a little out-of-left-field but for every criticism I received I referred them to the precedent set by Santo and the Vengeance of the Mummy.

Like every Santo movie we begin with a full length wrestling match seeing the Luchador in action. Although these matches are shot and cut in a fairly pedestrian way, and not having any real narrative value,  they remain quite athletic and interesting to watch. Fresh from his victory Santo is roped into helping unearth an ancient tomb. Donning his silver mask, white tights, wrestling boots and a safari jacket Santo sets off with the search party only to fall foul of rebellious locals and a re-animated mummy! 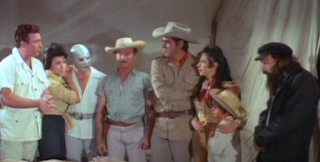 Santo movies often take a while to get going and this one is no exception. Between the opening ring action and any real monster antics there isn't much going on although here we are least treated to some nice sets. The caverns and campsites are all stagey but create atmospheric and evocative dioramas. And when the mummified shit does hit the fan it is extremely satisfying to watch. Since we are not dealing with Egyptian mummies the Producers are free to get creative with design and so this mummy is a skull-faced archer draped in hessian. This dude stealthily creeps about popping shafts into the hearts of the search party and getting all up in Santo's be-masked grill. 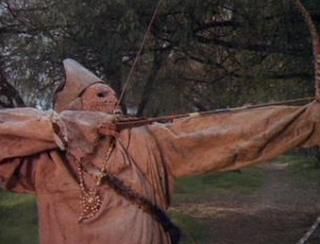 This leads to the eventual showdown where Santo, using all his knowledge of history, mythology and mummification practices, defeats the creature by wrestling the shit out of it. Santo movies may be low on production value and a little slow-paced, but the sight of watching a mexican wrestler tussle with a monster never fails to be fun.

In a Scooby-doo style twist, however, it is revealed that the mummy was really just a greedy member of the party wanting the riches for himself. This was at first disappointing but ultimately lead to my favourite scene in the movie. Having defeated the antagonist Santo, the love interest and a child walk back through the woods unaware that one final scare is in store. A corpse falls out of a tree and onto the kid. Santo rocks up and frees the child saying something to the effect of "Don't worry, this was just the real mummy. He must have placed him here when he switched places" and then walks off! Yeah, great Santo, that makes it all okay. I'm sure this kid won't have any lasting psychological or emotional damage as a result of having a thousand year old cadaver drop onto him. Santo; wrestler, tomb raider, historian and, it would appear, child therapist.

We end with another full wrestling match which is, again, devoid of any narrative relevance. The Santo movies are far from great, but the mix of sports footage and genre adventures is curiously engaging and always fun. This one in particular is enjoyable, if not totally up there with the best. 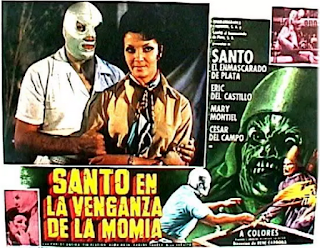