A review of Zombie Aftermath by Doctor Gogol aged 15 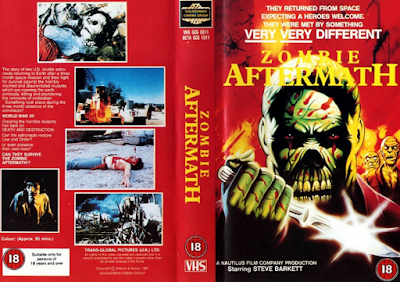 My friend got this classic video about zombies. We watched it and it was well rubbish. It starts off with these astronauts in a spaceship that looks like it was made out of cardboard or something. It crashes on Earth and there are all these dead bodies on the beach but they look like they were made of paper mache. It was so funny how rubbish they looked.


A review of The Aftermath by Doctor Gogol aged 37 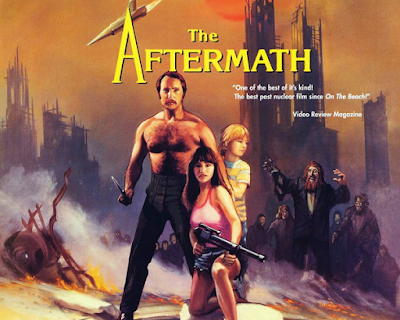 I first saw The Aftermath when a friend bought it on VHS after vigorously thumbing the pages of Tom Savini's make-up book and being seduced by the video cover's promise of latex and corn syrup mayhem. We hadn't anticipated much but after the opening ten minutes we knew we weren't going to be getting the horror masterpiece we'd hoped for. Desperate to salvage something from the experience I clung onto the few moments that I was able to mock and mentally filed it as a classic 'so-bad-it's-good' movie. That is because when I was fifteen I was massive tosser.

My eyes view b-movies the way a spice-lover's taste-buds experience curry. And so watching The Aftermath after four years of writing about b-movies meant I was actually surprised by how good it looked. Set in a post apocalyptic world littered with morality-starved gangs and the occasionally deformed savage, The Aftermath (the word 'Zombie' no doubt being added by a distribution company eager to piggy-back other horror successes) is by no means a horror movie but rather a survival tale peppered with action that slowly builds to a revenge fuelled finale.

Although budgetary restraints rob us of an impressive space craft interior the evocative use of red lighting and perfectly serviceable model works starts us off ambitiously. The discovery of the bodies is also quite effective. Rather than playing the discovery of the bodies as shocking, the scene wriggles in its own eerie atmosphere. Yes, up close the corpses still look like pre-school Father's Day presents gone horribly wrong yet from a distance they seem genuinely unsettling. 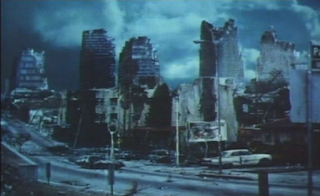 Exploring the doomed planet we are treated to some not entirely convincing but satisfyingly apocalyptic matte paintings of destroyed cityscapes. The film isn't stingey with these vistas either and when paired with some exciting atomic storms creates some almost Bava-esque imagery. I'd also expected to hear a minimal electronic soundtrack but was surprised to hear a full orchestra playing a fairly bold score. For the most part it feels like a 70's TV score but there are genuine flashes of John Williams at times. 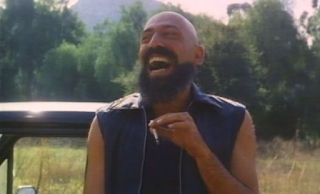 There is some nice casting with an extended cameo by Forrest J. Ackerman and a villainous turn by Sid Haig, here playing the same character he pretty much plays in most exploitation movies. He doesn't treat women very well but as unpleasantly predictable as the threat levelled against female characters is the scenes are generally pretty tame (though this may again be due to the curry-lover in me).

The narrative sags pretty heavily in the middle but ultimately pays off in a nicely staged shotgun showdown that moves from a deserted town to the tops of abandoned skyscrapers. And when the action does pick up it's bloody as hell. Bullets result in streams of thick blood while a shotgun takes off some poor bastard's head early on.

The most surprising element was that I actually fostered some kind of emotional connection to the story. I wouldn't go as far as to say I cared about characters but I certainly wasn't coldly witnessing familiar beats play out while waiting for the next splatter sequence. Not moved as such, but nudged.

The Aftermath isn't an all-timer by any stretch, but juxtaposed with my twenty-two year old dismissal I was blindsided by how satisfying I found it. The Aftermath has some effective imagery and knows how to stage action and although my dickhead teenage self did not care about the fates of the characters the filmmakers clearly did. 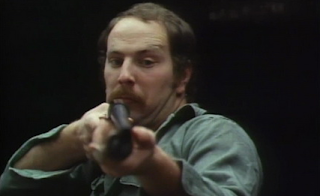