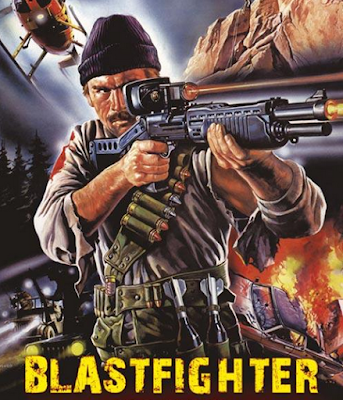 Blasterfighter might look like a shoot-em-up extravaganza serving up course after course of violent obliteration but the film is, in fact, a fairly measured thriller. Upon being released from prison, where he was incarcerated as a result of murdering his wife's killer, an ex-cop purchases a super-shotgun with the aim of assassinating the lawyer that put him away. He chickens out at the last minute, however, and returns to an isolated log-cabin from his childhood with his estranged daughter. It is not long before he falls foul of a local gang of game hunters and what starts as a series of mean-spirited pranks escalates until our hero is forced to go on the run pursued by an ever increasing army of huntsmen.

The film's biggest surprise is its measured approach to thrills. Rather than going full out in its attempts to shock and delight it takes its time turning the screws. Even the obligatory attempted sexual assault is handled without the voyeuristic relish normally associated with movies cut from the same cloth as this. Of course for many this restraint will be something of a disappointment. Being introduced to a super-weapon that we are told takes armour piercing, explosive, stun-dart and all manner of other rounds only to have it hidden away under floorboards the moment the log cabin is reached is something of a tease. This is symbolic of our lead characters refusal to engage in violence, though, as each time we see him intimidated we feel the movie push against its genre expectations/restrictions always to regain its composure.

The performances are generally strong and the locations are photographed so that they at times appear beautiful and at times terrifyingly inhospitable. Character motivations and internal logic also seem unusually considered for a movie with a title like Blastfighter.

Of course, our hero can only be pushed so far and once he snaps he goes a little knife-happy on a few of his pursuers. Then when it becomes clear he is circling back to his log cabin, and buried super weapon, anticipation for a violent finale builds. The film's restraint is not only its biggest surprise but its key weapon. It builds tension carefully, then releases it in one almighty explosion.

And boy does it explode. Despite the variety of rounds promised our hero opts to only use explosives, but this is the merest of disappointments and is soon remedied by jeeps bursting into flames, stuntmen being tossed through the air, full body burns, a couple of arms being blown off and the show-stopping moment when two huntsmen are exploded. And I don't mean they vanish in a fireball, nope, their bodies burst like gore-filled water balloons. 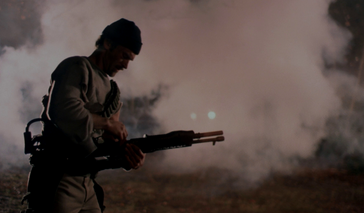 It would have been satisfying to have at least one exploding head and the lack of a variety of ammunition promised feels like a missed opportunity for some creative kills, but Blastfighter left me satisfied right up to the final badass shot of our hero driving his pick-up into town, the back filled to the brim with well-cooked fools. It's a smart, well thought-out movie that manages to be a happy marriage of both superior film-making and balls-out cathartic absurdity. I bloody loved it.