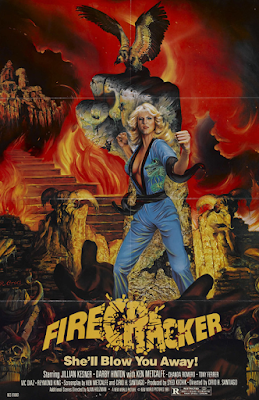 An undercover martial artist finds herself in deep with a far East drugs ring operating out of a martial arts tournament. It's cheap but fun and the lead (Jillian Kesner) and her co-stars show enough pugilistic flair to make the fight scenes cinematically satisfying. It's also worth mentioning that very little of what is on the poster happens in the movie.

For a while I was also certain this might be a slightly progressive female led action flick. Okay, the first time we see our hero fight is in her underwear, but since this was at night in her hotel room I'll give it a pass for contextual reasons. And for the next twenty minutes or so she is dressed in sensible, practical clothes, is not sexualised and is pretty much accepted into the male-orientated tournament without any bullshit "but she's only a woman" crap.

And then the 'chased by two assailants and her clothes keep getting caught on things and being torn off until she has to fight them topless' scene occurs. It's playful, yeah, but also feels like Benny Hill was behind the camera that day. In fact, rumour has it this scene was shot later and by a different Director in order to up the movie's nudity quota. 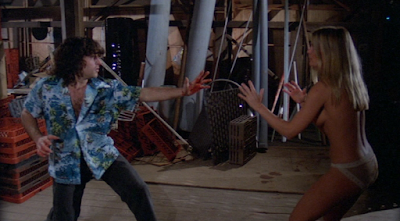 I'd barely processed this sequence when I was then hit by the really weird sex scene that occur two thirds in. Kesner is carried into a bedroom by her furry love interest while bathed in soft coloured light. He gently rests her on the bed and pulls out his... wait for it... butterfly knives. Knives that he uses to cut open her clothing in an unsettling passive-aggressive way. To be fair, she looks just as confused as we the audience feel. Once the bra comes off that confusion turns to, well, a punch in the guy's face. Not a playful slap, or a flirty jab but a full, hard Bruce Lee backhand to the mush. So hard is it the guy flies off the bed and across the room. She then allows him back on the bed and sets about using a knife of her own to cut off his pants. From that point on the sex is relatively straight forward. 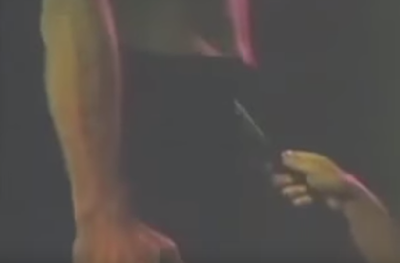 I like this scene. Granted, the production of the knife did threaten to turn the sequence down a murky and unpleasant alley and it is constructed for us to ogle her naked body far more than his. It's her reaction, however, that declares she is in control and will not have anything done to her that she won't be able to do to him. Plus, it's just weird enough to make what might have been a fairly cliche beat a little more memorable.

The film will make a nice double bill with Santiago's T.N.T. Jackson, a fun blaxploitation movie about a female martial artist hunting down her brother's killer. It too features a number off fun fights, a nicely executed gore moment (T.N.T. Jackson features an arm being broken in two, complete with blood spurt, while Firecracker features a face to a rotary blade kill) and both compete to win the coveted weird topless fight scene award. T.N.T. Jackson just about wins because that scene involves her stripping down to her pants and turning the light off so she appears invisible and is therefore ill-advised on not just a gender level but on a racial one as well.

Even these moments of shameless exploitation are ultimately harmless and to a degree oddly badass. Certainly nothing to leave you feeling grimy. Both movies are fun, short (always a bonus) and full of back-to-back marital arts action of a pretty good standard.

Unfortunately, despite being Directed by Cirio H. Santiago neither movie adds any more to the Slade mythology.