Skip to main content
Labels
Posted by Doctor Gogol May 13, 2013 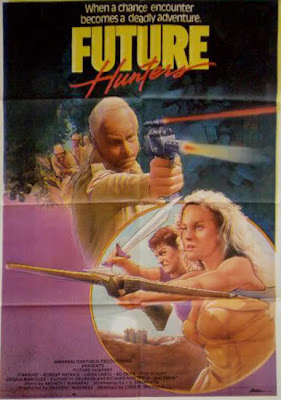 Since the human brain first developed the capacity for curiosity an almost incalculable number of questions have been asked by it.  The answers to these questions can sometimes be obvious, playfully shy or often downright illusive.  Some answers, however, are found in the most unlikely places.  Future Hunters, a low-budget 80's adventure starring Robert Patrick, is the custodian of an answer to a question that has perplexed man's developing mind since it first dared to ask it:

We open as Matthew, played by the utterly awesome Richard Norton, races through a post-apocolyptic wasteland in his makeshift muscle car-cum-tank. He quickly despatches his pursuers with his massive super-gun and races to his destination. 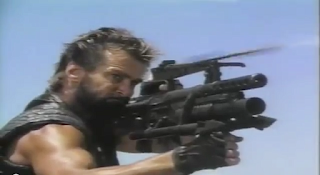 Charging towards the destroyed temple he's been looking for he continues to wipe out a variety of armed guards before reaching his goal; the very spear that pierced Jesus Chirst's side. Touching it, Matthew is flung back in time where he meets Slade, played by Robert Patrick, and his wannabe-archeologist but actual bar-owner girlfriend Michelle. Arriving just in time to stop her from being sexually assaulted by Hell's Angels he passes on the spearhead to Michelle telling her that it must be reconnected to the shaft in order to avert the nuclear disaster that caused his future. He then, very rudely, dies on them.

That's how you open a movie.

Returning to her bar Michelle tries to convince Slade to help her look for the shaft. It is here we get some much needed character crafting. Michelle is stoic and determined and obviously slumming it in the hospitality industry. Unfortunately you get the sense she is slumming it with Slade too. Utterly failing to defend her from the bikers in the opening moments of the film, Slade then refuses to believe there is anything odd about what just occurred, actually suggesting she hallucinated some of it.  He then arrives at the bar with the time-travelling Christ-spear beating news that he's got a job as an airline mechanic at a crop-dusting company. Michelle flat out ignores him, focussing on the spear and the mission ahead of her.  It is in these moments we clearly understand that Slade is a bit of a simple and ineffective dummy, while Michelle is determined, ambitious and righteous. This bittersweet scene is rudely interrupted by a guy who looks like Andre the Giant and Boss Hog got in Seth Brundle's machine together. 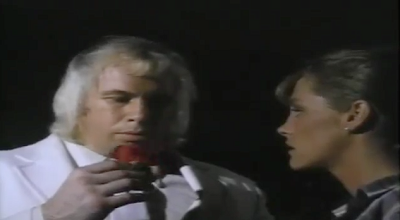 This albino-ish lunk and his henchmen are also after the spear and make it clear how serious they are by breaking a few of her glasses and throwing a chair on the floor before being scared off by some teenage customers who don't even come into the bar. Obviously terrified our heroic duo go to meet a friendly archeologist who tells them they need to go to China. So they do.

They are not there more than five minutes before Slade and his Chinese friend Liu, played by Bruce Lee boot-filler Bruce Le, are involved in an old-school kung-fu fight with a 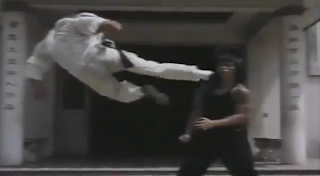 traditionally long haired white-beardy martial arts master.  Meanwhile Michelle is busy having her breasts exposed by some Chinese thugs that have burst into her hotel room to find the spear. Luckily Liu and Slade make it back in time to save her. Acting on info gained from one of the thugs our duo ditch Liu and head off the jungles of Asia to find the shaft.

It is at this point we find that the kind archeologist that sent them to China and Andre the Brundlehog are actually nazis who want the spear and shaft to rule the world. This presumably means the Chinese thugs were also nazis.

The movie then shifts a further gear, going from post-apocalyptic time travel kung-fu movie and settling into a straight boys-own adventure. This is also the point where Slade, despite being utterly useless up until now, is suddenly able to out-shoot trained armed guards in machine gun battles, fly a variety of aircraft and converse with ancient non-English speaking tribes. Michelle, on the other hand, runs around in a nightie, narrowly avoids a third sexual assault, gets scared by snakes and generally watches Slade take care of business. Although to be fair, she does get a pretty awesome knife fight with an oriental amazonian (seriously) over a pit of crocodiles. 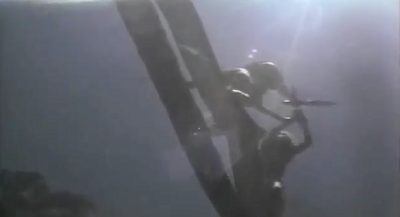 As you may have gathered from the above this film is a little schizophrenic yet a whole lot of fun. It is obviously made by people who either have a lot of love for the genre films of the time or believed that squishing as many rip-offs into one movie would result in it being a smash. Despite the obvious homages (ahem) to Mad Max, The Terminator and Shaw Brothers movies you get some Temple of Doom (including a Wille Scott snake encounter and a directly lifted rope bridge moment) and even some Return of the Jedi (the tribe Slade makes friends with are dwarves who dress as Jawas and act like Ewoks).

In addition the action is actually quite well staged. From the opening car battle to the numerous high adventure moments the film delivers. Even the martial arts sequence is choreographed and shot like a proper kung-fu movie.

But sometimes the jarring shifts can work against it. The frequent sexual threats Michelle has to endure are bad enough, but the nudity is not only entirely unnecessary it's also mean-spirited. Yet it's the characters that really suffer. If they'd have stuck with Michelle as the cool hero and Slade as the bumbling sidekick it would have been fine, but the role-reversal short changes Michelle and elevates Slade to something he doesn't deserve.  In the end you are left with nonone you either care for or even like.  Not only is the film missing some good heroes but also villains, as the nazi archeologist and his mutant Milky Bar kid are frankly as non-threatening as nazis can get (and I am including Allo' Allo' in that).

And so we have a barmy genre mash-up that despite some jarring attempted sex-assaults and weak characters is a whole lot of fun. Oh, if it were only that simple.

Like all truly perplexing riddles the answers throw up even more questions. A few months back I watched a film called Equalizer 2000. 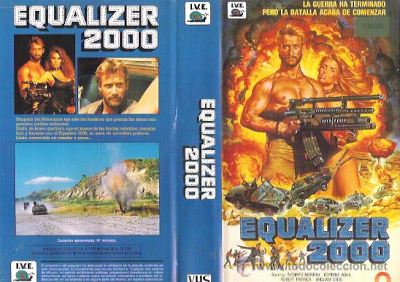 This film features Richard Norton as a Max Rockatansky style character with a black car and a huge super-gun.  Sound familiar?  As the opening moments of Future Hunters unfolded I found myself wondering if this was just co-incidence. I checked IMDB and found that not only do the films share the same Director but were made only a year apart (Future Hunters is the former). More mind-blowing is the fact that in the latter film Norton's character is called Slade. Does Robert Patrick's character eventually become a post-apocalyptic warrior that travels back in time under the assumed name Matthew to send himself on a mission to save the world? Is it a lazy Director re-using old ideas or is it a greater attempt to build mythology?  Does the Director pick up any more threads to this time-spanning tapestry in his later works?

I guess I'll just have to check out some more Cirio H. Santiago movies to find out. While I do that you can do a lot worse than checking out the utterly insane Future Hunters. 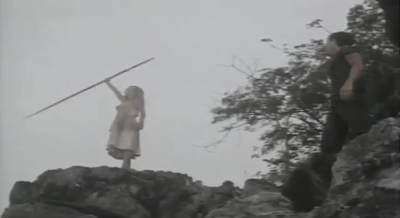