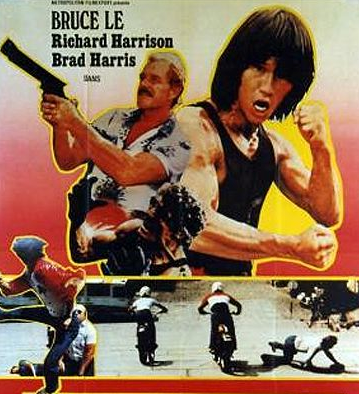 Challenge of the Tiger bordered on a joyous viewing experience. A daft kung-fu thriller starring Bruce Le (one E) and caramel Sharif Richard Harrison, the movie is competent and bonkers in all the right places.

Le and Harrison are two secret agents (I think) who are hired to recover some kind of secret formula for something (maybe). We are introduced to Le as he is randomly attacked in the street. Quite what he'd done to deserve this I'm not sure but his efficient handling of the assailants proves that while he's certainly not worthy of a second E he is an excellent cinema martial artist.

Harrison, however, is introduced driving into his mansion; the gate to which is operated by two topless women. He then plays a spot of slow-motion topless tennis with another lady while a topless ball girl assists. I say topless, she has a top on but has just opened the front so her breasts can hang out. I couldn't help but think how much it would hurt if the ball hit his opponent on her bare boob. After Tennis he visits the pool which is surrounded by topless or fully naked women. One such women runs and dives into the pool in slow motion and I couldn't help but fret over the risk of her slipping. This entire sequence induced something of an epiphany regarding my age and priorities: Attaining this opulent and sex-filled lifestyle comes second to having the opportunity to conduct a thorough risk assessment. While I worried about personal injuries Harrison and his entourage of topless ladies watch a cherub fountain piss water out of its concrete winkle and into another topless lady's mouth while discussing the potential healing properties of urine. I think they were going for suave playboy but Harrison's character is fucking his Sister away from Caligula.

Harrison and Le team up to intercept the formula that is being exchanged during a bullfight. This invariably leads to Le falling into the bull pit where he is immediately attacked by some more thugs. Quite what they were doing in there I don't know and I can only assume this was another random attack. Once he has offed those dick-holes he is attacked by the bull. It tosses him about a bit before throwing him through a wooden panel. With some distance between them Le opts not to leap out of the pit but instead takes his shirt off, walks towards the bull and provokes a fight. That's right, Le actually makes time to fight the bull.

The fight consists of a wide shot with a real bull running around him intercut with close-ups of a motionless model bull-head, presumably on the end of a broom handle. Le beats the shit out of it with his bare hands, the attack culminating in a Chiba-style animation of the beast's skull splitting in two. This goes down while Harrison watches in mild disgust. That's our heroes for you: a rich sex-fiend and an animal abuser. I'm surprised these pricks aren't randomly attacked more often.

After some sex and deceit the plot is thickened by their government handler. It appears that there are a lot of interested parties including a group of neo-nazis and a local Chinese gang. The nazi's chief operators are a seductive femme fatale (who by this point Harrison has already had a bath with) and a curly-haired muscular henchmen while the gang employs Bolo fucking Yeung. I did miss a lot of this explanation as I mistook the handler's demonstration of the formula for his drink of choice being a jug of hot gravy, a choice I found captivating.

The bad guys don't provide as much threat as one would hope. Yeung, despite having fought Bruce Lee and sharing a body type with Mr. Strong, goes out like a complete pussy in his first encounter while the curly-haired thug, who spends the whole movie grimacing and flexing his muscles, can barely damage a cardboard box even when enraged.

There is a lot of nudity in this movie. With one exception all of the principle female characters have at least one nude scene. At one point we keep cutting back to the femme fatale character getting ready for bed. We see her showering, applying cream, laying in bed and then sleeping, all topless. We see so much detail of her lengthy bedtime routine that the film almost becomes a procedural drama. Y'know, like The French Connection.

Had the film kept up this constant bombardment of absurdity and tasteless-ness then it would have been an easy recommend however the latter third of the movie ditches the buffoonery and turns into a fairly competent kung-fu movie. The fights are good, at times feeling like old-school Shaw Brothers fight scenes. It's also more ambitious than most low-budget kung-fu movies: The cast is aesthetically varied, the plot is complex enough to keep the narrative engine running and the locations look like they would have cost money to hire. It's just that after an insane start the absurdity thins out and the film loses its charm a little towards the end. 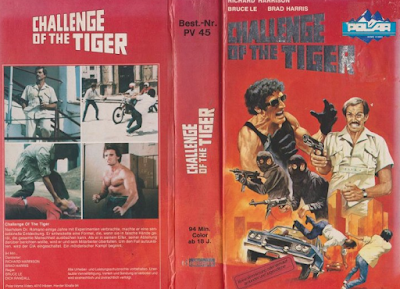