Skip to main content
Labels
Posted by Doctor Gogol May 31, 2015 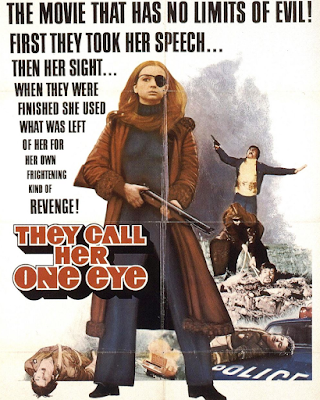 Frigga (Christina Lindberg), a mute farm girl, accepts a lift from a dashing stranger and is promptly seduced, drugged and forceably hooked on heroin. Using her dependancy to control her he puts Frigga to work as a prostitute throwing her into a cycle of sex and violent abuse. Frigga, realising the futility of trying to escape, begins to put her earnings towards lessons in combat while also generating her own supply of heroin so as not to depend on her captor and begins to implement a plan that will allow her to exact her revenge.

This Swedish revenge thriller is a tough yet memorable watch. It is a methodically paced movie with perpetually foreboding cinematography and editing. The action is captured in super-slow motion

allowing us to revel and recoil in equal measure at the bloody revenge killings Frigga perpetrates on her abusers. Even action sequences shot at normal speed have had considerable audio treatment, adding echoes to the foley to evoke an almost dream-like atmosphere. Many sequences play without dialogue but with abstract sound-scapes or electronic beeps and clicks externalising internal conflicts and ambivalences. One slow motion fight scene plays out with soft synth, the fluid motions becoming intimate and beautiful, far more so than any of the sexual content in the movie. There are also some immensely iconic images rendered with Lindberg dressed in an eye patch and long leather coat establishing the Snake Plissken look long before he made it to the screen.

The movie is synonymous with controversy, primarily due to the effect of an eyeball being pierced with a scalpel being achieved by stabbing the eye of a real human cadaver. Appalling as it is this controversy overshadows a more interesting discussion that is perpetually associated with the rape-revenge exploitation movie.

Sexual violence is almost a convention of exploitation and it is unsettling easy to see why. Write a rape scene into your movie and you have an easy point of motivation and an even easier moral standpoint to hide behind when the inevitable accusations of objectification are thrown about. "But it is supposed to be horrifying, it's rape!" cries the exploitation filmmaker as their audience sits in a darkened room silently, passively observing female suffering. The audience become complicit in the voyeurism yet engage in a contract with the Director that it is all above board because what they are watching will help them understand the cruelty men inflict on women more. The filmmaker and audience truly believe they can have their cake and eat it.

Yet it is the easy point of motivation that is possibly the more problematic. When used as a plot point rape is a unifying point of identification that justifies whatever rampage of revenge follows. The women suffer so that the audience can cheer when she gets her own back. Through this vengeance she becomes empowered yet women's sexuality is covertly accepted as a weakness, the vagina becoming the female kryptonite.

I'd seen They Call Her One-Eye a long time ago, before a lot of these concerns had fully coalesced in my mind, and before I sat down to watch it again I had nothing but concerns about what I was going to see. Weirdly, despite the movie clearly being exploitation and its subject matter almost entirely about sexual violence, I found its depiction of sexuality and its representation of women less clear cut.

From the second she is kidnapped Frigga asserts herself. Each time her captor believes he has broken her she bolts for the door. Even when she finally gives up trying to escape she it not succumbing, merely biding her time so that she can not only escape but get revenge. It is a choice to play the long game, not a passive acceptance of her fate.

As you'd expect the scenes of abuse are unpleasant to watch yet while the initial scenes are cut one after another, they eventually become intercut with her training in Karate, driving and shooting. Having scenes of her mistreated at the hands of men juxtaposed with men treating her with the upmost respect  presents the awful scenes so that they appear more integrated, rather than wallowing in her misery for a prolonged period of time.

Frigga is also an amazingly badass character. Lindberg, famous for soft core sex flicks, trained in martial arts for the movie and actually does a lot of her own driving for someone who didn't even have a license at the time. She handles the weaponry and action with ease utterly convincing as a killing machine and there is almost no attempt to treat the fact that she can drive, shoot and fight well as being unusual for a woman; she is accepted by Karate masters, race drivers and tough army brutes as unquestionably their equal. That is until she surpasses them and takes on almost mythological status. Frigga (in Norse mythology the highest ranking Goddess) is no hero. After beating the shit out of two police officers that try to arrest her she steals their car and drives it at high speed ramming seemingly innocent drivers off the road and often to their deaths. She has become death incarnate, an iconic and brutal bringer of doom. 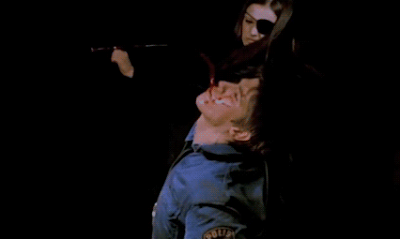 Her mythological status does not entirely consume the young innocent we meet at the start of the film. In the final moments of the movie Frigga stands over her captor, gun in hand and yet due to her affliction cannot form the words she wants to say. It is not overplayed, yet the impact of her abuse is such that her voice has literally been removed. It is a moment of genuine heartbreak at a time when one would assume one would be expected to merely enjoy the blood letting. As she drives off across a desolate wasteland, an angelic choir mixed with the sound of a thunderstorm it is clear that she is neither innocent victim nor ruthless aggressor but has transcended both into something more. 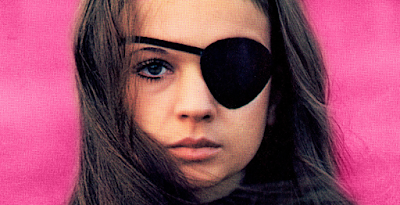 Director Vibenius has said he wanted to make the most commercial film he could and added the scenes to capitalise on Sweden's more permissive attitudes to pornography. This alarmingly suggests the shots were added to make those scenes sexier despite how utterly repellant the images are. Even more problematic is the inclusion of promotional photographs included on the DVD. Images of Linberg posing naked on the very set her character is repeatedly raped in is a terrible misjudgement. These could well have been just the images taken in the scene mentioned earlier and included as a curiosity, yet one can't help feel it adds to the notion that these scenes were ultimately composed as titillation. 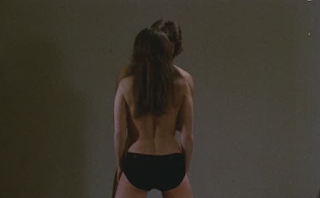 I'd not normally consider the implication of DVD extras on a movies ideology but the fact that Vibenius objected to the release of the DVD and attempting to block it's distribution might suggest he was not happy with some of the material they intended to release. Upon it's release, the movie was banned in Sweden and Vibenuis released the film under an assumed name which might further suggest his displeasure in the final product, yet interviews suggest quite the opposite. For a film to be conceived as a commercial venture it is often unconventional and contentious. So what was the intended product meant to actually mean? The movie's schizophrenia and the Director's erratic attitude towards the movie only make reading the text more difficult. 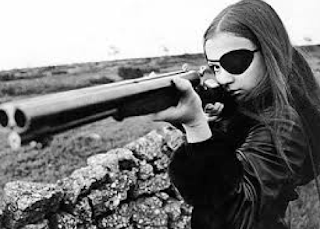 Ultimately They Call Her One Eye is everything above: a weird, problematic, visually arresting, ugly, empowering yet exploitative revenge movie that is both memorable and thought provoking even if not for the intended reasons. I don't know if I like it, but I cannot forget it.