Skip to main content
Labels
Posted by Doctor Gogol May 12, 2015

Those of you that studied Karate as a child might remember stiffly walking up and down a matted community hall throwing the same forward punches and kicks over and over again. Sonny Chiba did not study the same form of Karate as you. Wild of hair, crazed of eye and ruffled of gi Chiba looks like a man who has been angrily woken from a rough sleep. Like Bruce Lee mixed with the Tasmanian devil his limbs flail as he flips and crashes his way through fights, the camera frantically trying to keep up with him.

Although famed for his martial arts movies, like the wonderfully titled Karate Inferno: Executioner 2, Chiba also appeared in a number of remarkable non-Karate based movies (Bullet Train is a standout) and has popped up in a number of small roles in recent western movies such as Kill Bill and Ninja Assassin. The three movies below have been selected to serve as an introduction to the diverse and weird world of Sonny Fucking Chiba. 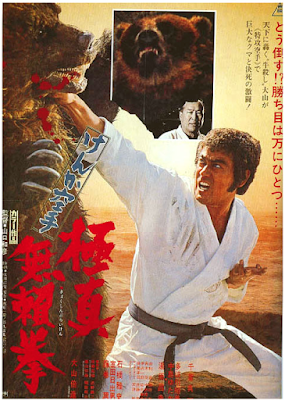 Go in expecting to laugh at a man fighting a stuntman in tatty bear costume, come out surprised at a densely packed martial arts epic, some slightly baffling pseudo philosophy and a shocking amount of integrity. Although I would normally recommend The Street Fighter as a first stop for a classic Chiba movie this one actually has most of what makes that movie great (including an x-ray punch!) plus a lot more.

The movie is filled to the brim with nicely choreographed fights captured with loose and kinetic camera work that matches Chiba's frenetic movements while imbuing these sequences with energy and urgency.

Of course it is the bear fight everyone wants to see and boy does it deliver. If you're worried that you might actually see a real bear getting the shit kicked out of it, rest assured it is some poor bastard in an outfit taking most of the punches. Despite this the fight is still surprisingly convincing, brutal, bloody and actually quite tense.

The movie is a sequel to Karate Bullfighter and together they are based on the true story of Chiba's own Karate master Masutatsu Oyama. Oyama's party trick, it would seem, was to actually beat a live bull to death with his bare hands. He would do this a lot. Even when he was getting on a bit he would still wow crowds with his ability to smash a cow to death (although by this point in his life the bull would have been tied down to make it less of a strain for him). So not only was he an expert in the martial arts but also a master at being a massive bellend to farm animals.

Since he never fought a bear and since this movie is only loosely based on him you may well be able to enjoy the beautiful cinematography and vibrant fisticuffs without feeling bad about endorsing animal cruelty.

The narrative climaxes with a beach showdown and it is here the central message of the film is clarified. Understanding that to become strong you must first become weak, Chiba runs up and down the beach over and over until he is completely shagged out, then engages his ultimate foe in a fight to the death. It's nonsense of course but don't let this put you off an excellent martial arts extravaganza with a memorable centrepiece. 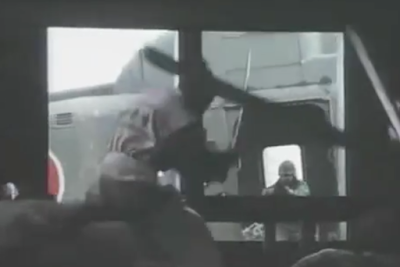 Chiba is a military officer on manoeuvres who somehow gets launched back in time to feudal Japan where he, his fellow soldiers and their array of (then) state of the art weapons must battle against a tyrannical warlord and his fierce Samurai warriors.

What more do you want? Fully armoured Samurai warriors fighting against tanks and guns. If you like hard sci-fi this movie isn't really for you as it wisely stays away from any real scientific explanations and gets straight to the fun. The production is superb and nothing beats a shot of an armed helicopter hovering outside a Tenchu while a soldier empties an M-60 into the Samurai inside.

It is a movie that truly delivers on its concept with scale and production. 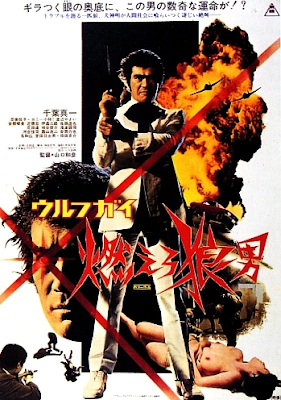 If either of the two movies above sound a little eccentric then strap yourselves in because this motherfucker bottles its own piss.

Chiba plays a reporter who, although not a werewolf as such, has wolf blood coursing through his body which gives him some enhanced strength and healing ability. His main goal is (deep breath everyone) to investigate the gang rape of female singer who, now riddled with syphilis, is able to unleash an invisible tiger on those who attacked her and those that covered up her assault. A werewolf does also pop up in one scene.

Now I've never had syphilis (he protests a perfectly measured amount), nor have I checked with any local sexual health clinics but I'm pretty confident the ability to conjure a phantom big cat is not a common symptom of the affliction.

Considering this movie features a mix of horror, action and marital arts the most common ingredient is sex. It's like an episode of Game of Thrones with brain damage.


I'll be honest, I had no idea what was happening most of the time. I was, however, treated to lots of sex, two scenes were someone is ripped apart by an unseeable feline and far more comedy waa-waa music than you'd expect.


These movies only touch on Chiba's filmography. Thankfully there are a number of box-sets available so there is no excuse for getting your sanity pummelled by the furious fits of the bear-beating, time-travelling lycanthropic karate tornado that is Sonny Chiba.
Labels: Triple-Bills