Fishes Out of Water, Warriors Out of Time 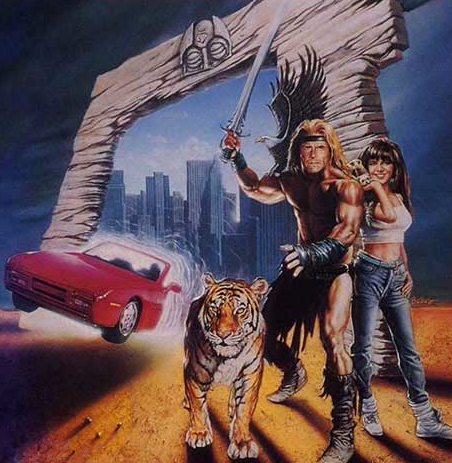 It was not unusual in an eighties science fiction or fantasy movie to witness a half-naked, half-armoured space warrior being baffled by a be-mohawked punk admiring his “awesome threads”. The urbanisation of science fiction fantasy during this period was commonplace. Futuristic, interstellar or otherworldly conflicts were fought against the backdrop of urban America.

The appeal of this is fairly obvious. Keen to cash in on the mainstream fascination with science fiction fantasy, no doubt given further life off the back of the Star Wars trilogy, filmmakers needed to find ways to ground their epic adventure stories and subsequently save money. If you only have to pay out for a couple of costumes and a few laser effects your sprawling space opera suddenly only requires the same budget as a cop movie. 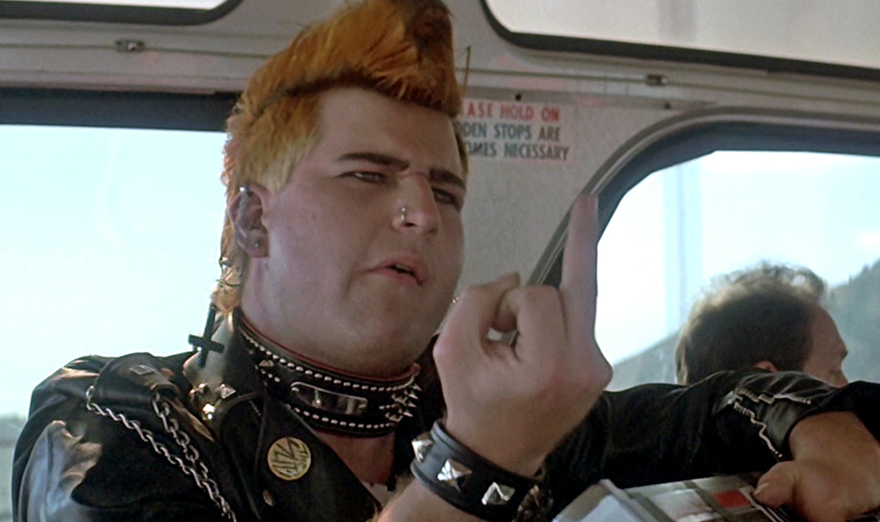 Films such as The Terminator (James Cameron, 1984), The Hidden (Jack Sholder, 1987), Highlander (Russell Mulcahy, 1986) and The Time Guardian (Brian Hannant, 1987) all used this to enable imaginative genre movies to be made on tighter budgets. One could also argue that mainstream culture was starting to take notice of sub-cultures and in a fairly desperate attempt to appeal to a teen audience filled the frame with assorted punks, skaters, slackers and rockers. Alongside, and often associated with, these archetypes were the seedier criminal elements of urban America including gangs, pimps, prostitutes and crack-heads.

Normally these figures would usually be met by a middle-aged, slightly right wing cop in a stiff grey suit shaking his head and wondering what the world has come to. At some point a creative mind realised the juxtaposition of this gritty ‘reality’ with outlandish fantasy would not only exploit these two popular trends and save money but also have the potential for comedy. On paper this must have seemed like a good idea.

Star Trek IV: The Voyage Home (Leonard Nimoy), proved extremely popular and still does. It is, essentially, a long string of fish-out-of-water gags with little to no dramatic thrust, yet people were so

amused at Spock being annoyed by a loud stereo system, or struggling with crazy 20th century turns of phrase, that they didn’t seem to notice. It could be argued that it was the success of this movie that allowed the proliferation of this sub sub-genre to continue into the early nineties. Masters of the Universe (Gary Goddard, 1987), Suburban Commando (Burt Kennedy, 1991), Abraxas, Guardian of the Universe (Damian Lee, 1990), all brought warriors to Earth and took time, if only a little, to play these interactions for humour, light social commentary or both.

The film that exemplifies this the most is Beastmaster 2: Through the Portal of Time, (Sylvio Tabet, 1991) a film so aggressive in its pursuit to be the ultimate fish-out-of-water fantasy comedy it forgets that it is the sequel to an earnest Conan-esque swords and sorcery movie. The films opens firmly established in that world and for a while leads you to believe you may well be in for more of the same. Barely dressed animal whisperer Dar (Marc Singer) is locked in battle with his evil brother Arklon (Wings Hauser) across a gorgeous desert backdrop, all accompanied by a sweeping and iconic score by Robert Folk. It’s when the mysterious Lyranna (Sarah Douglas) turns up with quips and horrifying uses of the word “dude” that one will start to expect something is amiss. Before long the time-travel element is introduced and this fantastical trio is sent to modern day Los Angeles for all sorts of mirth. There is a plot thread that involves a nuclear warhead but the film gets so wrapped up in how funny it thinks it is that all dramatic tension is unraveled.

Teaming Dar with a grating streetwise sidekick Jackie (Kari Wuhrer) It goes through every fantasy fish-out-of-water trope like it’s working from a list of them. Dar is amazed by Jackie’s “horseless carriage”, Dar is slightly baffled by rock ‘n’ roll, Dar learns a swearword. At one point Dar even double takes at a strip joint even though the guy lives in a world where people dress in nothing but leather pants. 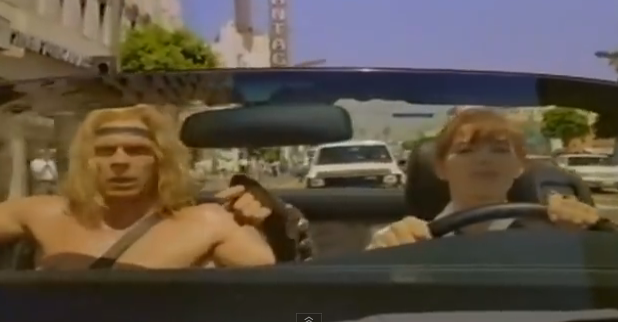 It is Akrlon that suffers the worst however. He is set up and played like an amalgamation of Darth Vader and the Emperor, yet once on Earth the narrative cannot wait but strip him of all menace. In an attempt to blend in he visits a clothes shop and is greeted by an outrageously camp fashion guru with a European accent so non-specific he may well have been speaking an alien language. Although we are spared a trying on clothes montage we spend entirely too long watching Arklon pick out an outfit. When he leaves he is dressed in this appalling pastel Don Johnson shoulder-padded suit jacket. Since Arklon’s costume already had shoulder pads he spends the rest of the movie looking like something between Herman Munster and a member of the Dynasty cast having been infected by the black goo from Prometheus. If this isn’t enough the end battle is a complete and utter selling out of the characters, story and all the good work of the first movie. When these mythical characters, now both rendered comic relief, finally confront each other in a zoo Jackie accidently leans on the controls of the PA system. As a result the final battle doesn’t play out with the exciting musical score but with circus music and the narration to what must have been a cute animal show. This is done to ensure that what is being said deliberately undermines what his happening on screen for comic effect. It is very hard to be rooting for the hero as he tests his strength against his evil archrival as some prick on a tannoy says “aren’t they cute, shall we try and make them kiss?”

All this time Dar has been chased by James Avery’s gruff detective. As with everything else in this movie the usual beats of this character are ticked off. Avery’s detective goes from assuming Dar is mad to begrudgingly respecting him. It is this gradual respect that seems to be the overall point of these movies. We are sold that the simplistic methods of these otherworldly warriors are honest and honourable and far less complicated that this crazy world of ours.

The strange thing is that watching the films back it’s hard to identify with anyone but the off-world warrior and be alienated by our own. So broad and universal are their motivations (justice, revenge, peace, etc) that they are easily recognized and engaged with. Yet the cartoon worlds they are thrust into, a collage of brief fashions and out-of-date colloquialisms, by comparison seem bizarre and alien. Despite all the criticisms above this is why I find these kind of films so fascinating and watchable as the passage of time has made what should be normal completely alien. In short we, the audience, have become the fish-out-of-water.