Atlantis Interceptors is a mix of genres that alone seem conventional but when put together become a little more unusual. When examined at surface level the film appears very similar to your average low budget Rambo knock-off as a tough american mercenary tears up the Philippines with a large assault rifle. Yet when it throws in post-apocolyptic vehicles, natural disasters and the lost civilisation of Atlantis it gets a little harder to explain. Allow me to try valiantly.

In the far future (well, 1994) a top secret research platform has unearthed some odd treasures from the bottom of the sea. The submarine being used to extract these artefacts is nuclear powered and this has an unfortunate effect on the mysterious sunken civilisation from whence the artefacts came. As Atlantis begins to rise from the depths a spectrum of phenomena is caused including storms, tidal waves and arrows to the neck.

You see all this time a cult called the Interceptors have been living secretly amongst the normal human population waiting for this moment to arrive. Now seeing their spiritual world returned to them they decide to dress in S&M gear, customise their vehicles with machine guns and spikes and rip the living shit out of a nearby island. 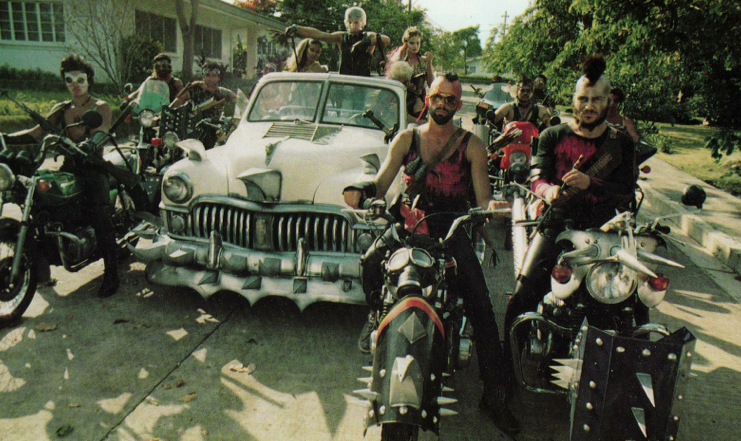 Washed onto this very same island are our band of heroes consisting of a few of the research team and two tough mercenaries named Mike and Washington. Mike and Wash are so tough they have no need to dress to intimidate, favouring instead tight white and/or pale blue clothes. Before long they clash with the Interceptors who are after one of the surviving research team, Dr Rollins, and the knowledge she gained by deciphering the aforementioned artefact. What this ultimately amounts to is a series of sieges until Rollins is captured. Mike then leads an assault to get her back.  Jesus that's a lot of set up for not much story.

As well as there being little actual story there is next to no characterisation. Apart from those I have already named I can't remember any other characters with real clarity. There is another scientist and a guy who looks just like him who I think was called Bill, if indeed they were two separate characters at all. Along the way they pick up other people who disappear just as quickly as they arrived. Of the three characters whose names I do remember there isn't much more to go on. Although it is inferred Mike and Wash have been working together for some time at no point did I believe they were friends. Although I think the writer was shooting for snappy banter, the two characters just end up being dicks to each other. Washington gets pissy over really petty things, like being asked the time when he is counting money. He also doesn't like being called Wash, preferring Mohammed due to a recent conversion to Islam. When he is happy he tends to shout things multiple times. Other than that I know nothing about this guy.

Mike and Rollins are set up as a romantic couple. This is established during the following red-hot exchange:

MIKE
You think all sailors are like Popeye, we all just each spinach!

MIKE
Well I tell you what, when we get back I'll take you out for a spinach dinner.

This erotically charged ritual is their first proper conversation. I would also argue it's their only proper conversation as she is kidnapped within twenty minutes and isn't in the film until the end. When she does re-appear she is all over him like they are Anthony and Cleopatra. Sure he saved her life a couple of times but she barely knows him. Plus he looks twice her age. Oh and you think that spinach conversation is a throwaway moment? Nope, first thing out of her mouth once she'd rescued is reminding him about it. She wants a spinach dinner, she gets one. That is essentially her narrative arch.

Away from Wash and Rollins Mike is a nonentity. He's basically grumpy, charisma-less and good at shooting people. Perhaps this is actually an intentional critique of Mike. Perhaps a life of violence has eaten away his soul until he is hollow and only basking in the company of others makes him fill with life again. Perhaps it is a comment on us all, for are we not all more complete in the company of others?  Perhaps if you stare at a blank wall long enough you start to see things that aren't there.

So what is actually there? Well despite its attempts to convince you otherwise some money has been spent on this film. There is some fun model work during the destruction of the research platform and locations are at times awesome. Usually post-apocolytpic films head for the desert but here we are treated to destroyed towns and cities in flames. It is still small scale, but every inch of the frame is filled with production value. 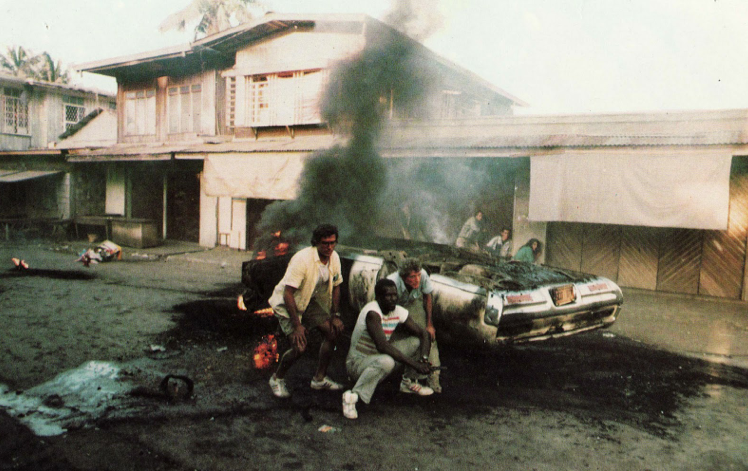 Atlantis itself is a fairly ordinary looking island, though some very attractive scenery has been chosen for the action to take place in. The bad guy has this cool transparent skull mask and even though he's pretty weedy looking still manages to menace. 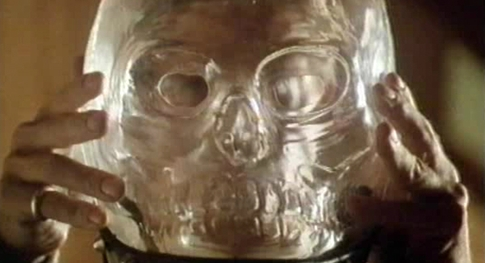 The action is generally fun and thank god because there is a lot of it. It is for the most part bloodless, though there are some messier kills towards the end including a lovely spike trap. The film exists under a number of titles and cuts and the version I saw has evidence of the censors meddling all over it, most notably with a decapitation (uncut in the trailer above) being remarkably chaste. In spite of this the gunplay has an efficient abruptness to it that makes it still feel brutal. A standout sequence is a prolonged chase that involves people leaping from a helicopter onto a moving bus while being shot at. It is nowhere near as glorious as the final act of The Road Warrior but it is far more ambitious and exciting than expected from this level of production. 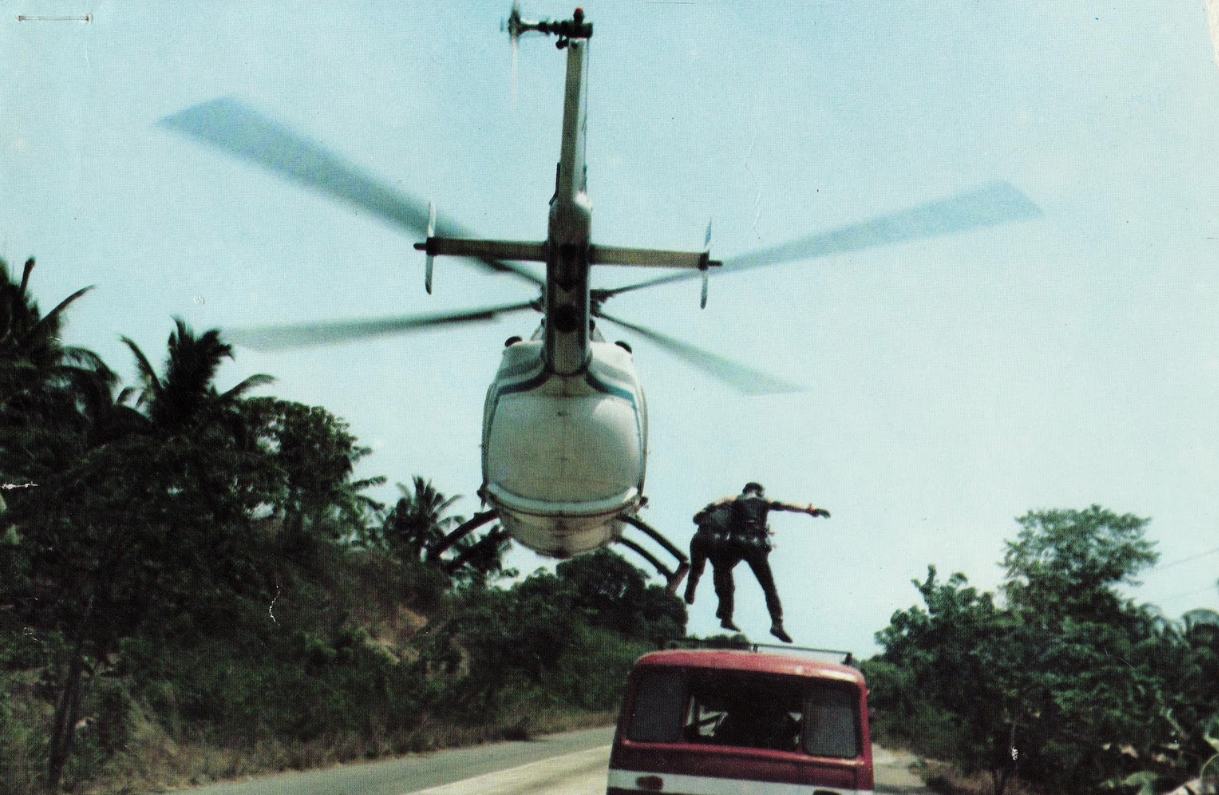 There are also lasers, a weird high pitched echo effect on all the bad guys screams and a cameo from my favourite Slash actor Mike "Barbara" Monti.

When the credits roll you'd be forgiven for feeling like you know less than when you started. There are some elements to the narrative that are left dangling. Elements such as the return of an earlier character but as a bad guy (is there brainwashing going on?), everything involving Rollins towards the end and why one part of the island is lovely and idyllic while the rest is a destroyed hell-hole. In fact it never really clears up where in the world this island is and whether the rest of the world has any idea this shit is going down. Yet none of these unresolved issues matter when you've got a guy dressed like Kiss driving an armoured motorbike into the sea.

Atlantis Interceptors is fairly unsuccessful in its attempts to stitch together these genres without the seams being weak and visible, yet you can do a lot worse than spend an hour and twenty-five minutes in the company of effective gun battles, car chases and cool kills. Despite its many flaws Atlantis Interceptors happens to be bloody good fun. 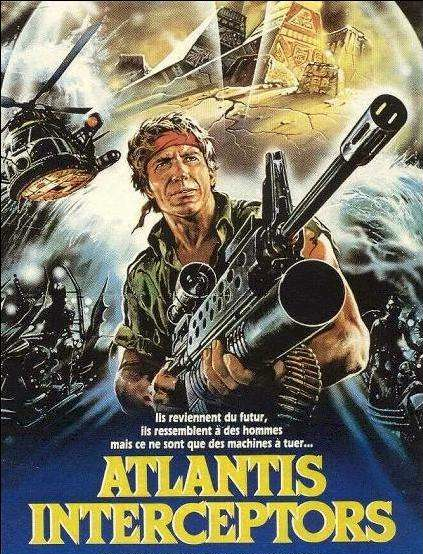