Icons of the Overlooked #9: Jim Kelly 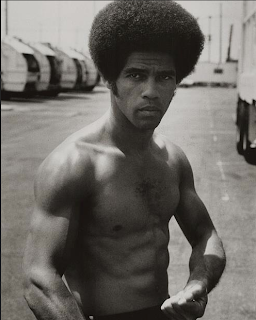 There is a big part of me that thinks Jim Kelly wasn't overlooked at all.  He was, like a lot of martial artists of the time, technically great but perhaps not quite as visually exciting as the martial artists to come.  The guy wasn't a great actor either.  So maybe, based on that assessment, a few lead roles in low-budget martial arts movies is a reasonable career to have had?  Yet he is not too dissimilar to Chuck Norris in many respects.  So why has Norris had such longevity while Kelly has slipped into obscurity? 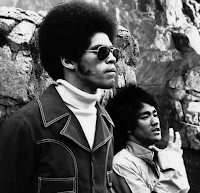 Kelly's first major role was as Williams in Enter the Dragon (Robert Clouse, 1973).  Then relatively unknown Kelly was sharing scenes with more familiar faces such as John Saxon and the tower of charisma that was Bruce Lee.  It would be easy to be ignored, standing next to Lee as he creates iconic moment after iconic moment, yet regardless Kelly holds his own.  Kelly gets all the best lines, gets the best look and comes out, well, coolest.  In fact, if you remember something cool from the film that doesn't involve Lee it probably involved Kelly.  To go up against Lee at his best and still come out being memorable is pretty impressive.  As a result Kelly was given a leading role of his own in Black Belt Jones (Robert Clouse, 1974).


The above clip, the films opening, is pretty awesome and the rest of the film isn't without its fleeting moments of badassery.  Yet the overall tone of the film is comedic, perhaps unintentionally.  The homoerotic bubble fight at the end is very unexpected.  On the other hand Three the Hard Way (Gordon Parks Jr, 1974), where Kelly stars alongside the amazing Fred Williamson and Jim Brown, is as badass as they come.

His fight sequences in this movie, although infrequent, have a raw edge to them while the film as a whole is relentlessly entertaining.  Featuring this amazing cast at their most charismatic, the most powerful shotgun in the world, a trio of topless interrogators and a body count that only Rain Man could calculate it is by far my favourite non-Dragon Kelly film. 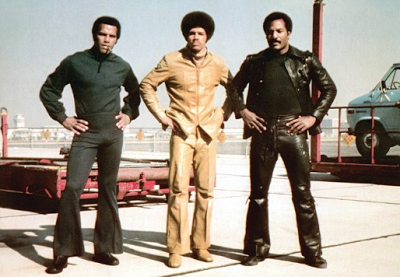 The ensemble returned two years later with One Down, Two to Go (Fred Williamson, 1975) and despite adding legend Richard Roundtree to the mix it suffers from an almost unbearably languid pace.  Silly caper Hot Potato (Oscar Williams, 1976) does little to buck the downward spiral and Black Samurai (Al Adamson, 1977), though considerably better, is so nuts it is almost impossible to take seriously. 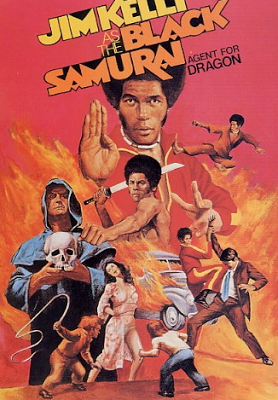 Take, for example, the moment where Kelly dons a jet-pack in the middle of LA, flies for about ten minutes and lands in a forest where he is attacked by primitive tribal warriors.  I mean proper bone-through-the-nose spear-wielding Zulu stereotypes.  Upon defeating them he walks for a short while and is then lassoed by a dwarf in a cowboy outfit.  Add to this mix devil worship and you've got yourself an extremely entertaining yet immensely daft piece of film making. 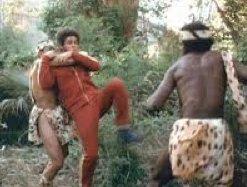 Herein lies the problem.  Yes, Kelly got a fair few films under his belt but unfortunately that's also about as high as they were aiming.  Cheap, badly paced and at best absurd, beyond Enter the Dragon and Three the Hard Way only Take a Hard Ride (Antonio Margheriti, 1975), the well-regarded blaxploitation western is worth a look.  The problem was the films Kelly was given were nowhere near as cool, charismatic or as badass as he was. 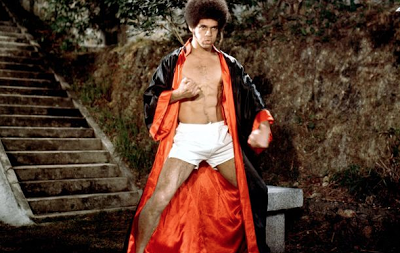 So it wasn't the fact that Kelly wasn't given mainstream attention that was the problem, but rather that he was never really given the change to capitalise on his explosive debut as Williams.  Kelly had a lot more to offer action cinema and now, with his recent passing, all we'll ever have are the glimpses of brilliance spread across a handful of so-so movies.  It wasn't so much a case of audiences overlooking Jim Kelly, rather filmmakers underestimating him.