Lucio Fulci is a director associated mostly with his work in the horror genre. In his career Fucli made a number of hardcore horrors that favoured rich atmosphere and stomach-testing gore often at the expense of narrative logic. Yet Fulci made a number of films in other genres, quite a substantial number actually. I've already talked about Massacre Time (1966) in my Spaghetti Westerns article, yet Fulci worked in thrillers, action, fantasy and erotica to name a few. Yet regardless of the genre Fulci's aesthetic proclivities always manifested themselves resulting in some interesting, if not entirely unproblematic, results. The following three films are some of my favourite Fulci non-horrors. Though be warned, they do not make for easy viewing.


Fulci made a sword and sorcery picture and before the end of the first act you'll be wondering why he didn't make more. The story follows Ilias, a young traveller charged with an important quest, and Mace, a tough warrior who helps him along the way. Ocron, an evil sorceress who wears nothing but a gold full-head mask and a snake, has a vision that Illias will destroy her and so sets her wolf-man warriors and the mighty sorcerer Zora to kill him.
Like all good fantasy movies we have a young, inexperienced adventurer fulfilling his destiny, a series of trials for our heroes to be put through and a magic weapon which, in this case, is some kind of bow that fires laser-arrows. Yet this is no fairly tale adventure but rather a very adult affair. We are barely out of the credits when we are shown a brain-spilling scalping and a pale, naked girl slowly split in half by the aforementioned wolf-creatures. Although the opportunities for extreme gore are less frequent than in his horror work when they do crop up Fulci leaps on them with gut-gurgling detail. Even the traditionally heroic funeral pyre scene forgoes the noble silhouette set against flames, instead focussing on skin and tissue melting away. 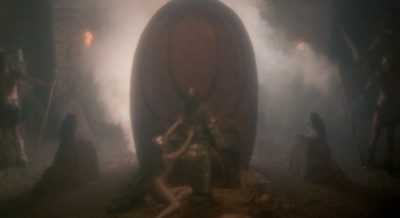 Fulci is not just about gore, however, and the film shows off his ability to create an intoxicating atompshere more than any of his films. Rich colours, mist-choked landscapes and imaginative creatures not only create an exciting fantasy world but one that actually convinces. Everything Fulci attempts to communicate, be it how tough this world is to live in or the corrupting nature of the dark magics that are being meddled with, he does so with utter conviction.
Again, Fulci shoots everything with a dream-like quality and despite some exciting battles the film moves quite slowly. The print I saw was a little milky and if properly remastered would be a sumptuous, atmospheric and tough fantasy movie. 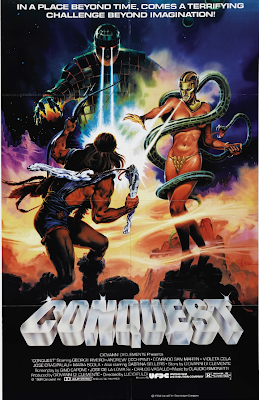 
Contraband is essentially Fulci's Poliziotteschi, a tough action-thriller starring euro-crime star Fabio Testi. Testi plays a cigarette smuggler caught in a mob-war and has to endure double-crosses, kidnappings and violent assassination attempts as a result.
Despite the films contemporary setting Fulci still manages to create an evocative atmosphere, a fight in a sulphur pit being a highlight. In addition Fulci shows a real knack for action. The fights and shoot-outs are impressively blocked and captured and his use of slow-motion gives the film a touch of Peckinpah.
What also gives the film that feel is the way woman are treated. In Contraband women are little more than victims or sex-objects and in a couple of cases both at the same time. Yet this is not the only problematic element in this film. 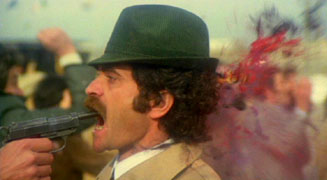 The extreme violence is, for the most part, fitting. Bullet-hits jet red in glorious slow-mo and there are a couple of delightfully elaborate, and splattery, make-up effects. Yet as always Fulci pushes that little bit further. There are moments of real grotesqueness, in particular a scene where a female drug-dealer's face is burnt off, that removed from the horror/fantasy context just play as gruelling and unpleasant. In all of Fucli's films I've scene this is the one that has the most difficult moments to watch.
So why am I recommending it? These moments, as awful as they are, are infrequent and the film around them is actually exciting and gritty. There is a hell of a lot to enjoy with Contraband if you can look past those two or three moments of unnecessary unpleasantness. 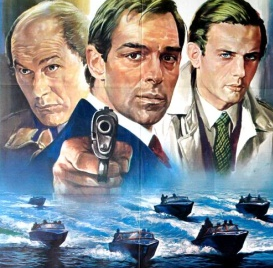 As a Giallo this film could be considered a cheat. Yet it draws on the elements Fulci is most famous for less than most of his horror work and, since Giallos also fit nicely into the thriller genre, I feel happy including it on the list.
Widely regarded as one of his best works the film focusses on a serial killer who is targeting children. The murders cause significant unrest that soon turns to a paranoid frenzy, leading to the lynching of local woman suspected of committing the crimes. Although the subject matter is difficult Fulci handles it with care and restraint. In particular the lynching scene, although graphic, is more memorable for the use of diagetic music and editing.
It is a brave film too, with a fully naked Barbaret Bouche trying to seduce a school-boy and a less than subtle attack on the church yet all of it his handled with a confident grasp on tone and intent.
Fulci does indulge his love of gore on a couple of occasions, in particular a cliff fall sequence being punctuated with the frequent dashing of skull against rock. However this is Fulci in full command of his skills, creating a difficult, yet measured and serious work. 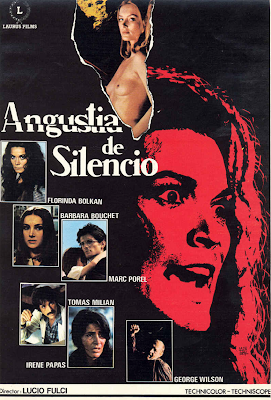 Fulci's career spanned many genres and if you want to get a taste of how he worked outside of horror these three films are a good place to start. This is by no-means a pleasant way to spend an evening but there is some amazing film-making on show throughout this triple-bill. And you never know, you might end up thinking of Fulci as more than just the guy that made a zombie fight a shark.