The Problematic Functionality of Women in Prison 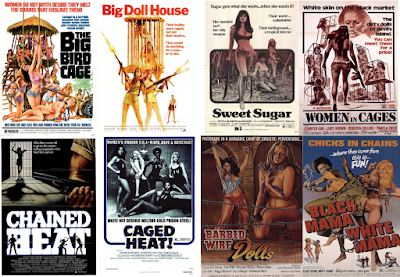 Exploitation films can be a hive of ideas and imagination and often put female characters in positions normally reserved for men. While Clint Eastwood was blasting away at punks on the mainstream screens Pam Grier was acting as equally badass on the smaller screens. Despite this seemingly progressive concept even the most die-hard fan will have to admit there is stuff in these movies that are problematic. To say the least.

Fundamental storytelling structure tells us that for us to really connect with a character we must see them go through hell, only then will their eventual victory be truly earned. In exploitation movies featuring female characters this is, unfortunately, a very specific kind of hell.

Rape-revenge films in particular revel in the empowering idea of their female characters striking back at male oppression but only after they have suffered some of the most horrific sexualised violence one could expect to see depicted. The women in prison sub-genre has a similar structure, and issue, and while the level of abuse varies from film to film the overall structure and message is the same: a female character can only exhibit agency if she has been entirely stripped of it beforehand. 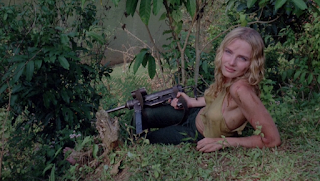 Pretty much every women in prison movie of the 70s rocks the same story: A woman finds herself, through some form of corruption, sentenced to jail time in a work camp rather than a regular jail. There she will meet a range of stock characters including a mouthy badass who our hero will butt heads with, the tough black chick, the young innocent who can't take the pace and an army of sleazy, lecherous guards. While working the girls will be subjected to a range of punishments and indignities ranging from medical experiments (often the camps are a cover for unethical Doctors to get their kicks), physical abuse, sexual assault and girl-on-girl violence. 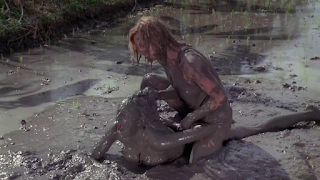 If these atrocities were played for genuine effect one could at least argue it's part of basic storytelling but nearly all of these events are served up for the straight male gaze. Fights take place in showers or muddy ditches, girls are stripped and whipped and the sexual assault is, well, what it is. Sometimes the wardens or the mad scientists are women upping the potential for lesbian titillation. There is very little pretence here: they want to show naked girls in all sorts of peril.

Come the finale the movies shift a gear. The girls start to get the upper hand and cease becoming victims, beginning to take on a more badass persona until the eventual mass escape in a hail of bullets and bodies. At this stage the films can often become genuinely exciting and the women are placed as tough and formidable agents of their own destiny. It is very rare in 70's mainstream cinema to get a female character looking as badass as this:

It's just a shame that to get there we have to witness far more images of women half naked and suffering. The Big Bird Cage and The Big Doll House are two of the better ones as their particular brand of abuse is more tolerable than others, feature Pam Grier (instantly elevating the material) and contain some well crafted action at the hands of Jack Hill. This formula was so easy to replicate and the box office draw of nudity and violence so enticing to audiences that it was repeated over and over with varying degrees of competence and brutality.

Sweet Sugar is a particularly good example of how those with next to no filmmaking competency can take this template and still produce something watchable. It's not that the film in of itself is bad but the shifts in tone are so spectacular that when paired with gaping holes of logic the movie barley functions at all. 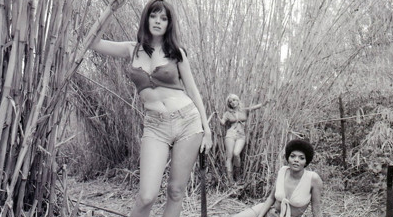 Sugar is framed for possession of weed and shipped off to a sugar cane plantation. The girls hop nonchalantly into a truck and are carted off. They happily wave at the workers as they go by and soak up the sun on their journey. It's almost like they are off to summer camp. One slightly frantic girl panics and picks her moment to leap out the back of the van. The drivers catch her, punch her repeatedly in the face and attempt to rape her. She is only saved when another girl offers herself up as a better option. Then they are all back on the bus and off they go again!

The tone shifts dramatically like this throughout the movie. One moment we are watching a teen comedy style awkward seduction of a younger guard who is so inexperienced with women he takes his cues from a dating book, while the next our hero is having the still hot barrel of a recently fired pistol jammed down the front of her shorts. Sometimes the perverse and the bizarre collide to create scenes that are weird and jarring but absurdly fun.

In one such scene a group of women are locked in an open-topped room while the mad Doctor injects cats with a serum that turns them feral. He and the guards then hurl the cats over the walls and onto the terrified girls. 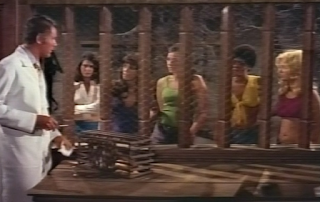 The sight of meowing house-cats tumbling through the air in slow motion while actresses roll around covered in fake scratches and holding onto clearly docile cats had me laughing out loud despite being barley minutes away from the last, and probably next, moment of utter grossness. This all culminates in a scene more befuddling than airborne cat torture.

The point is that this formula can work even in the worst hands. When Directed by those that can at least keep a consistent tone and handle action they can work really well. Despite everything that precedes it the final acts of most of these films are exciting and tense with it being almost impossible not to root for the heroes in their moments of liberation. It may leave you feeling upbeat but you can't escape the sense you've been manipulated somewhat.

This type of movie carried over into the 80s where the action moved from work camps in foreign countries to traditional prisons. These movies aren't quite as vicious as their predecessors and yet weirdly they feel more cynical and exploitative. Caged Fury, for instance, has some joyously bizarre moments thanks to the wonder that is Richard Barathy and it is by no means as graphic as some of the 70's movies yet there is a mean-spiritedness that I can't quite pinpoint. This either speaks of the indefinable qualities of movies or my failure as a writer (or both). The best way I can describe the feeling is that the 70's flicks are like watching your Toddler tumble around with a piss-filled nappy, blowing raspberries and poking turds into the tray of your Blu-Ray player, with a look of mild disgust but also an appreciation that the little fella is just testing his boundaries. The 80s, on the other hand, is like watching them as a teenager act exactly the same way and having to assume there is a level of spite behind the behaviour. 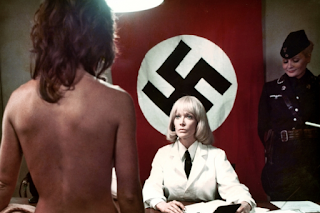 A hybrid of the earlier movies penchant for pushing boundaries of taste and the oncoming 80's preoccupation with nastiness is the Ilsa series. These movies have much the same structure only they place the villainous Ilsa (Dyanne Thorne) as the main character. This crazed nazi scientist inflicts the most cruel experimental torture on every conceivable part of the body. The first movie, She-Wolf of the SS, is a tough watch by any standards but while the racial stereotyping doesn't get any better the sexualised violence softens throughout the series. Harem Keeper of The Sheiks is more palatable and functions more like a filthy spy adventure (it's actually the kind of movie I'd imagine James Bond would make) while the final movie, Tigress of Siberia, is an oddly structured action thriller.

It is perfectly possible to tell a story where a female lead is put through hell without any lesbian shower scenes or genital torture and although these movies have rousing and empowering finales the journey taken to get there is immensely problematic. There is a lurid quality to these movies that make them feel quintessentially exploitation and it is hard to be into B-movies and not be tempted to dabble. If you're not feeling up to the level of torture these movies present and want something that still feels, for the most part, fun I'd aim for any one of them that stars Pam Grier. 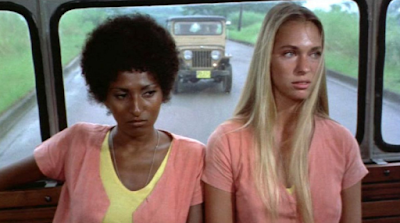 And maybe Sweet Sugar, but only for the cats.
Labels: Articles