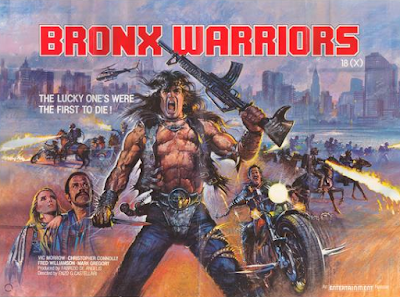 Often lumped in with Post Apocalyptic movies Bronx Warriors is actually more of a Warriors clone. This gang-fighting fairy tale centres around a derelict Bronx that is the target for redevelopment by an evil corporation. Before they can move in, however, they need to do something about the gang problem.

Enter a motorcycle gang lead by the heroic Trash. Trash looks like a gazelle has thrown together a heavy metal outfit in an attempt to infiltrate Aerosmith. At no point in the movie does he seem to demonstrate any articulation in his spine. Like a pound-shop Power Ranger he only swivels at the waist, his back remaining entirely straight. He sits so upright while riding a bike I was constantly concerned he might smash his face into a low bridge.

His arms, however, seem to have no bones in them what-so-ever. They flop and flail like a couple of freshly caught sea bass. Worse still his face peeks out from a curtain of black curls articulating emotion with much the same rigidity as his structurally unquestionable but entirely unfit for purpose skeleton.

Trash is caught in a battle with rival gangs but finds this conflict worsened when a mercenary working for the evil corporation (Vic Morrow) gets into the Bronx and tries to stir up trouble between the gangs in the hope they will wipe each other out. This requires Trash to embark on a trip across the Bronx to form a truce with rival gang leader Ogre (holy fuck it's Fred Williamson) and fend off the corporations invading goons.

The story has a little more to it than the Warriors and takes longer setting it all up, meaning the bit that is actually a direct copy (a journey across the city fighting off gangs) only takes up about 15 minutes of the film. The fights aren't quite as well choreographed but use slow motion in much the same way. The finale, where Morrow's bad guy gives up his covert plan and goes full pantomime villain while ordering stormtroopers on horseback and armed with flame throwers to clear the place out, is pretty epic in comparison to the rest of the film. It's a stunt filled Wild Bunch homage with fights, shoot-outs, horse stunts and fireballs all captured in glorious super slow-mo. The film isn't hugely bloody but there are a couple of satisfying squibs thrown in and one particularly chunky head shot.

What The Bronx Warriors does especially well is take the idea of colourful gangs and elevates it to something wonderful. The Warriors may have the Baseball Furies but the Bronx has the zombies. These white helmeted roller-skating hockey thugs are incredibly non-threatening. Though compared to the Bob Fosse style dancing gang they look like a Chechen Death Squad. These silver hatted, cane wielding bad boys literally tap-dance and high kick their way through fights in a delightful bit of silly-buggery.

Morrow and Williamson are always good value and the difference in production value between this and Warriors is only slight, meaning this is a rare Italian knock-off that isn't that much cheaper than the movie it was copying. It's fun, violent and silly. Also very much recommended.
Labels: Reviews