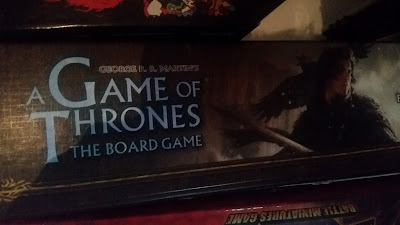 Battle for control of Westeros as one of the six most formidable families in the land in this strategic game based on the series of fantasy books. Build your armies and move them by land or sea pillaging and attacking your enemies, seizing their castles and reaping the rewards all the while bartering for influence and building supplies to fend off an attack from the savage Wildlings! 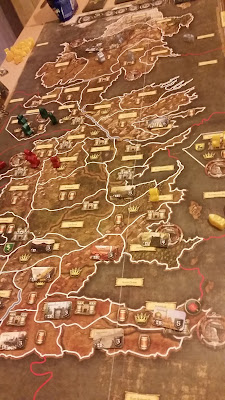 You play over a giant map of Westeros that has been divided into various spaces named after locations from the books. These spaces can contain a number of symbols that have particular effects: Strongholds score you points and allow you to build armies, crowns win you tokens to barter with and supply barrels allow you to grow your armies. Your armies consist of footmen, knights, ships and dreaded siege engines (all with different combat strengths) that can be moved into spaces fighting off whoever has control and claiming the symbol(s) and their rewards. Whoever controls a designated number of strongholds (the number of which is kept on the victory tracker) or whoever has the most under control when the round tracker reaches 10 is the winner.
The game is divided into three rounds. Round one sees the drawing of three Westeros cards that trigger a randomised series of events. These events can allow you to use the number of barrels controlled to grow or shrink (if you've lost some) your army and, build your armies or entering a bartering phase for three special tokens. These cards can also push the Wildling tracker closer to triggering a Wildling event, but more on that later.
Round two sees each player laying an order token face down on each space that contains their armies. Orders can include marching (where your pieces march aggressively into other spaces and initiating combat with whoever they meet), support (where your pieces lend support to those in neighbouring spaces) and defence (where you prepare to be invaded by other pieces). There are other orders but I'd be here forever explaining them all. Once all the orders have been given they are flipped up and resolved accordingly. The final round features combat where the total combat points of all the pieces fighting over a space, plus any supporting pieces next door, are added up. Each player then draws a random hero card (based on the most iconic characters from the books) and throws them into the mix. The person with the higher number wins and the defeated army has to retreat. Finally, everything is tidied up, trackers adjusted to represent who has control of what and the game moves back to round one.


What makes this different from your average Risk knock-off is that it encourages players to form uneasy alliances. One of the Westeros cards drawn in round one requires players to secretly bid tokens on a series of special tokens with powerful abilities. Tokens are placed in the palm of each players hand for each of the three abilities (extra combat points, being able to change an order once all have been revealed and being able to decide the outcome of draws) and then revealed. Whoever has bid the most for each one wins the token and has those abilities for as long as they hold it. This system allows players to drive the cost up for people who really want a particular power, deplete other's tokens so you can outbid them later or aim for second place and earn the chance to use more special orders (like normal orders but stronger). Strategy is key here as the Wildling phase requires players to pool tokens, working together to defeat the invasion. When a Wildling attack is triggered the players must all secretly bid tokens but the total must equal more than the Wildling's current strength. Your enemy might be trouncing you but driving their bids up over power-ups might make them less able to get you out of trouble when Wildling's invade
In battle players can pledge support for each other, form alliances and/or betray each other at the worst possible time. Leading a rival player's army into a tricky situation with the promise of help and then pulling out your support at the last minute to reward the other player who you'd been secretly plotting with all along is actively encouraged and wonderfully satifsfying. 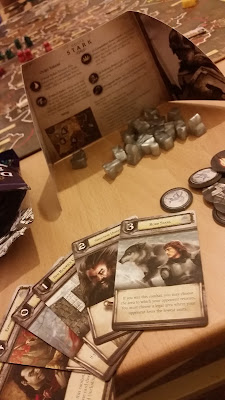 
As with all Fantasy Flight Games the board, cards and pieces are beautifully constructed. Thick card, amazing artwork and sturdy pieces are the norm. Yeah, it would have been nice to have some sculpted figures to move around but the wooden meeples are a little more conventional for this kind of game and actually make you feel like you are commanding an army from a tent. 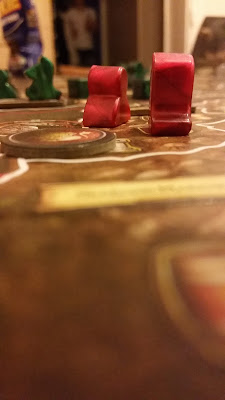 
The rules are tough to get your head around at first, however once you start playing they not only become clear but amazingly simple. I've played this twice, each time with brand new players on the team, and it hasn't taken long at all to get it going. There is fair bit of setting up and I wouldn't recommend it for younger children as there are a few terms to wrap your head around. It can also go on for a while. That being said the round tracker means it will only ever go on for 10 rounds meaning it is quicker to play then some games of a similar nature. It does require something of a gift for strategy and although I seem to suck at this kind of thing the game is so fun to play I don't mind at all.
The game is meant for 3 - 6 players. I've played with both 3 and 4 players and have found that Although the 3 player game requires a good chunk of the map to be off-limits it works better than with 4 where one player is free to roam the south pretty much unchallenged. A game with all 6 players sounds like it would be the most interesting and would get the juiciest above the table action but you'd need a massive table and best part of an afternoon to play. 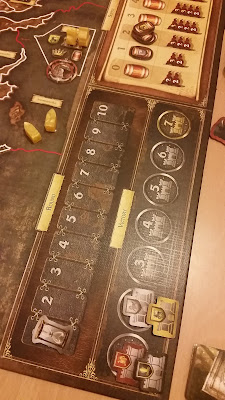 It's a deeper version of risk that balances its complexity with a finite playing time. Fans of the TV series shouldn't expect their favourite actors to pop up as this is firmly based on the books. At times the game really feels like your commanding an army that are invading Winterfell or laying siege to King's Landing. Gorgeously produced and with levels of strategy so deep yet simple to grasp it is probably once of the best conceived and balanced games I've ever played.