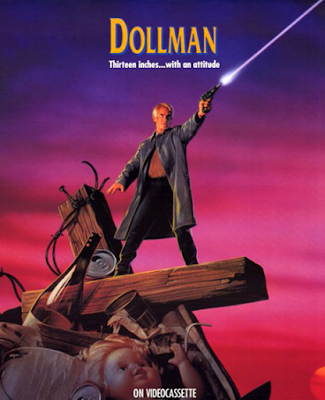 I had been obsessed with the cover of Dollman for sometime. The image that adorned the front of the big box VHS cassette that sat upon the shelf of local video rental store, a big yellow card ticket dangling from the sleeve like a loveable but needy dog's tongue, was both amusing and badass. The premise (a space cop the size of an action figure who had a gun that could explode people) suggested it would be a riot, though for some reason I never got an adult to rent it on my behalf. Maybe there was something that wasn't quite clicking for me; a child hood sixth sense if you will.

Fast forward a couple of decades and on a nostalgic whim I bought a DVD copy and would you believe my childy-sense was pretty much on the money. Like most Full Moon movies Dollman was a movie full of fun ideas that although were executed terribly (mostly) still managed to be faintly enjoyable. In the good column was a goofy concept, a self awareness that doesn't spill into smarmy irony, Tim Thomerson and some generally good performances (an early turn for Jack Earle Haley included). The rather fuller bad corner featured very poor production values, the more enjoyable gore and sci-fi elements (exploding people! Gun retrieval via magnetic palm!) restricted to one scene and the usually reliable Albert Pyun just kinda phoning it in.

It's fine, but as is nearly always the case it didn't live up to the movie in my head. So you'd think I'd learn my lesson when I discovered a sequel existed and one that not only promised to capitalise on the science fiction mini-asskicker concept but that would also piece together some characters from other Full Moon movies to create a post-Universal pre-Marvel shared universe. You'd think. 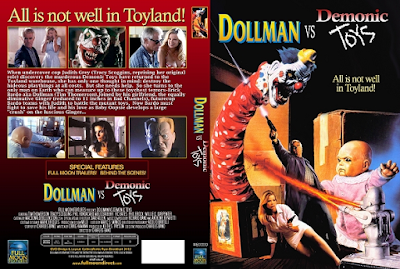 In Dollman vs, Demonic Toys Tracy Scoggins (who sounds like the kind of character Northern working class actors would lust over in 80's British sitcoms but looks like a the kind of character Gene Wilder or Dudley Moore would lust over in 80's American "romantic" comedies) is a tough cop who is working an unresolved case involving possessed toys that began in the movie Demonic Toys. She seeks the help of Brick Bardo AKA Dollman, stranded after his original outing and his new girlfriend Nurse Ginger who had been miniaturised by aliens in the movie Bad Channels.

These Z-list Avengers heads off to a warehouse to take on the satanic toys where the film... ends. The movie barely makes it past the hour mark and when you consider a chunk of that time is taken up with length flashbacks to the previous films you might be looking at only 45 minutes of original footage. This is not necessarily a bad thing. All the best bits of Dollman are present in this movie meaning you don't actually have to go back and what the original, padding and all. I haven't seen the first Toys or Bad Channels but I'm going to go ahead and assume the case is much the same. As a result this movies manages to cram in a flying evil head, space ships, aliens, a cool robot, exploding people and other such frivolity simply by montaging all the better bits of previous movies.

Not only do you get the best of three movies but you also get some fun (and effective) miniature sets, a wicked stop motion spider and Tim Thomerson having a fist fight with a GI Joe figure in the movie's satisfyingly silly finale. The part where the giant baby doll tries to forcibly impregnate Nurse Ginger in a doll's house is flat out weird and unpleasant (and is saved only by virtue of it being so utterly fucking bizarre that it proved difficult to correlate with any real human experience). In short, it's bonkers. 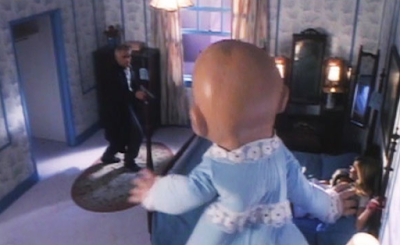 The original Dollman had charm and some of that carries over into this fun mess. I dunno, maybe not seeing Dollman could leave you wondering what the hell any of this nonsense is about but at 60 minutes and change it isn't' going to suck up a whole lot of your life. There is an odd, possibly masochistic, side to me that would like to see a series of Dollman vs... movies but I suspect this might already be the pinnacle. That notion, that this scrappy piece of shit might be the pinnacle of its kind, gives you an idea of how low the bar is but like the original Dollman, sat alone on the shelf, even the scruffiest, neediest dog in the pound could do with a pat on the head and the experience, however superficial and fleeting, can be rewarding for both involved.

I may have taken damning with feint praise to a whole new level. 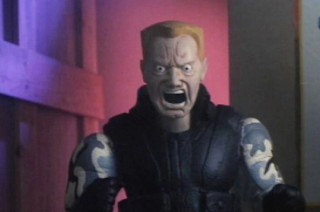