Icons of the Overlooked #13: Jeff Speakman 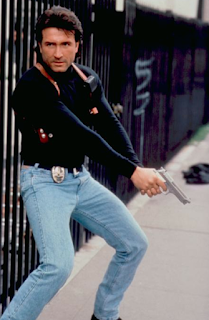 A turning point in my appreciation of film was the day my relatives got satellite TV. Suddenly I was able to break the shackles of four channel UK television and, armed only with an E240 VHS cassette, spearhead my own little revolution against prescriptive programming. I would ask my relatives to record movies that I had selected from the TV guide and often requested they just leave the tape going all night. That way the main feature would be a movie I was expecting while the follow-up would be a lucky dip of sorts. It was this method that gave me my first exposure to what I thought, at the time, was an exciting martial arts discovery.

The Perfect Weapon (1991) was a fairly no-nonsense, stripped down martial arts story about a young boy with rage issues accidentally killing the school quarterback and returning after exile to rekindle his relationship with his brother while simultaneously getting mixed up in a Chinatown protection racket. The story wasn't all that, the stakes pretty small and the production pretty low rent (most of the film looks like it was shot on sets that make most multi-camera sitcoms look like The Lord of the Rings). But the thing that stood out from all of this was star Jeff Speakman.

If Uncle Sam set about creating his own master race I'd imagine it would look like Speakman. Bestowed with a square-jawed head, an immaculate stubble and a hair cut just the right side of mullet Speakman looked like he should have been advertising cigarettes in a sunset-drenched ranch yet he was able to execute complex and interesting martial arts moves on screen convincingly. Irrespective of its merits in real life situations, Kenpo (his particular style) was great for action cinema. Like Seagal's style this 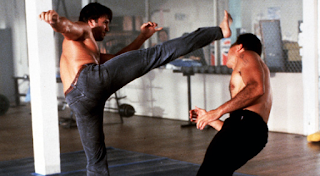 looked like it might actually work yet Speakman was a little more agile than he, able to pull of the slow-motion reverse-roundhouses synonymous with Van Damme. To this day I remember being impressed that Speakman could leap into the air and kick well above his head while dripping in body oil and vacuum-packed in denim. Leading man looks and a martial arts style that was both convincing and stylised suggested Speakman had the chops for action movies and Weapon, though far from perfect, showcased his skill set expertly.

The movie's efficiency works in its favour as the fights come quickly and often and are punctuated with satisfyingly stylised sound effects. And it doesn't hurt that the movie is packed with a mini-Expendables of supporting actors such as Mako, James Hong, Professor Toru Tanaka and Cary Hiroyuki-Tagawa.

I enjoyed Speakman's debut enough to request Street Knight (1993) as my main recording when I spotted it in the schedule. In this Speakman plays a washed up cop haunted by a hostage situation gone wrong. He's drawn back into action when a missing child he offers to track down ends up at the centre of a plot by a rogue black ops team to manipulate gang warfare in LA. It's an ambitious plot and certainly makes for a more engaging story but all that set-up means it takes ages for any real action to kick in. It's more cinematic than Weapon and has some great kills, most notably going to town on a guy with a couple of spanners and interrogating some poor dude by putting a gun in his mouth and shooting through his head at an oncoming assailant. 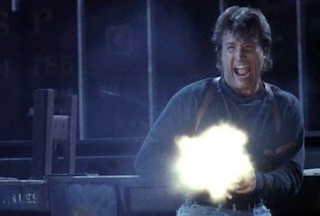 Despite this and a traditional scenery-chewing Shakespeare-spouting British villain the film suffers from a slow build up and a less than explosive finale. Yet for a second movie it was still pretty good and showed a progression in ambition and production. And then Speakman vanished from the TV guide. Decades went by without his squinty lumberjack-shirted fisticuffs in my life and, despite briefly pondering how he would have made a really good Johnny Cage in the Mortal Kombat movie he largely faded from memory. Sometime last year he popped back into my consciousness and it inspired me to track down some more of his movies and see whether that upward trajectory continued. Spoiler alert: no it fucking didn't.

Based on the select films I have seen the next phase of Speakman's oeuvre falls into two categories:

These films reflect the upward trend displayed by Street Knight in that they either display an increase in budget or reflect an attempt to stand out from the crowd. Despite being marketed as a Speakman movie, The Expert (1995) sees him sharing the lead with James Brolin. Speakman's role is somewhat supportive and his action moments are fine but limited. It is, however, his most cinematic movie. Scorpio One (1998) is a kind of Die Hard (well, Executive Decision) in space. The concept out-weighs the cheapness but again Speakman and his martial arts ability are sidelined.

These movies are loaded with action, fights and often cool car chases but suffer from a complete lack of funds. Running Red (1999) sees Speakman as an ex-Russian solider who has relocated to LA to start a family but is pulled back into an assassination plot by former comrades. This actually has an engaging plot, some nice miniature work at the beginning, an awesome car chase and some interesting action. Unfortunately it looks like a daytime soap opera. Worse still, the central bus chase is just the footage from Red Heat with shots of Speakman at a steering wheel spliced in. This in turn made me question whether any of the big moments were genuine or just stolen from other movies. It's lack of budget also creeps into the ending that falls completely flat.

This is also the case with Land of the Free (1998). Here Speakman plays an utterly lethal political campaign manager (?) who finds his boss, played by William Shatner, is actually fronting some militant organisation. Speakman goes into witness protection and is hunted by the Shat's goons. There is a brilliantly staged car chase and a couple of competent shoot-outs but it looks just as crap as Running Red, suffers from the same duff ending (The climax is Speakman going mano-a-mano against 90's Shatner) while the spectre of stolen footage still lingers (A cool helicopter explosion also popped up in Cyber Tracker, the movie I watched directly after Land of The Free).

So what was the problem? Why after a couple of strong starts was Speakman either sidelined or saddled with piss-weak Frankensteined shit? The guy was photogenic, had a recognisable and interesting martial arts style and although by no means an actor was charming and charismatic. He was, without doubt, an 'all-American' (in the classic, non-progressive sense) action hero.

And that may be the problem. Speakman joins the exclusive club (alongside actors such as Willis, Norris, Bosworth, etc) of caucasian, American-born male action stars of the era. It would appear, rather surprisingly, that early 90's action was a pretty diverse genre (Van Damme, Schwarzenegger, Lundgren, Gruner, Norton, Snipes, Blanks, Wilson, Rothrock). Even Stallone went to great efforts to mangle dialogue like he had a thick European accent. Maybe Speakman played a Russian in Running Red to try and cut in on some of that action?

What I do know is that Speakman got off to a pretty good start but took a real nose dive. Of course there are a number of movies I haven't seen, most notably Timelock (where he plays a scarred space villain) but I can't imagine many of them bucking the trend. Ultimately there are only two films I'd actually recommend seeking out. The Perfect Weapon is far from the perfect movie but is probably the best showcase for his abilities while The Expert is actually a pretty decent film as long as you're not expecting a full-on martial arts movie.

This article is by no means suggesting Speakman was criminally overlooked. In fact Speakman's ideal place was in the direct to video action market. Even within that narrow bracket, though, Speakman deserved some better projects. Or at least some more liberally budgeted ones. 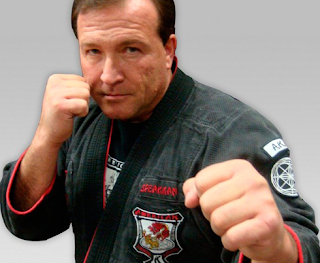