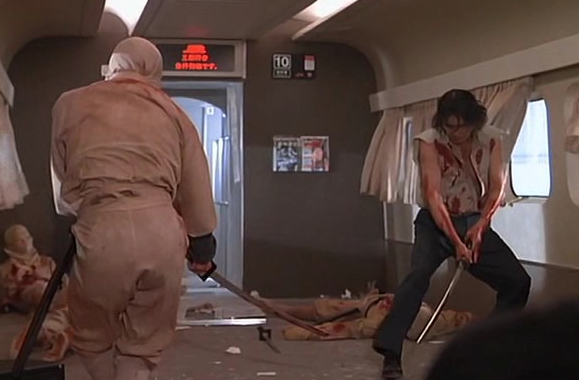 Christopher Lambert hooks up with Joan Chen on a business trip to Japan completely unaware that she has been targeted for assassination at the hands of a feared ninja warrior and his clan. Chris seems to be having a lovely evening right up until the point he sees her beheaded in a bath at which point he becomes a loose ends that needs tying up. Chased across Japan Lambert is used as bait by the ninja's rival, a modern day Samurai, and is caught in a deadly battle of honour between the two.
The Hunted is a little gem, mainly due to its measured approach. It is structured as a thriller, rather than a marital arts movie which means it works on building tension rather than racing from one action scene to the next. That doesn't mean the film lacks action, it just means those scenes appear to have far more impact when they arrive. The bullet train massacre in particular is a bloody brilliant action sequence. It is well blocked and shot and escalates satisfyingly (it is this scene alone that bumps the movie from an 8 to a 9). The movie spills plenty of blood, but not enough so that it comes across as cartoonish. The mythological elements of the ninja are played down (they are really just highly trained killers) yet they are still presented as legitimately terrifying presences. It is this balance that makes The Hunted a really underrated thriller and a criminally underrated ninja movie.