Skip to main content
Labels
Posted by Doctor Gogol May 21, 2014 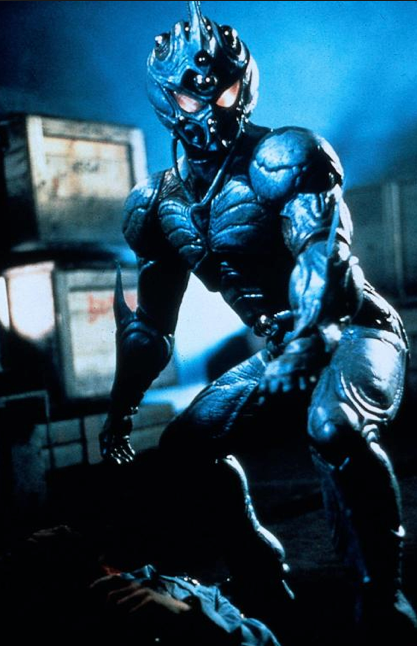 The Guyver (Screaming Mad George, Steve Wang, 1991) blew me away as a kid. It had everything I loved at that age: monsters, martial arts, an awesome armour-wearing super-hero and Mark Hamill. Of course at the time I didn’t really know who or what a Guyver was as the movie I saw was called Mutronics: The Movie.

I first remember seeing a poster for Mutronics in a sci-fi horror fanzine, possibly Fantasia, and it soon found its way onto my bedroom wall. When I finally got to see the film it wasn’t quite the masterpiece I had concocted in my head, but it was pretty bloody close.
A young, nerdy kid gets beaten up in an alley and accidently falls face-first into a weird alien device that transforms him into the Guyver. This bio-boosted hero wears badass biological armour complete with elbow blades, a chest mounted laser weapon called the Mega-Smasher (THE MEGA SMASHER!!!) and these little hissy steam things in its face. The Chronos Corporation, an organisation that specialises in genetic meddling, is after the armour for it own nefarious agenda. The results of these experiments are called Zoanoids and are essentially thugs that can transform into a range of rubber-suited monsters. 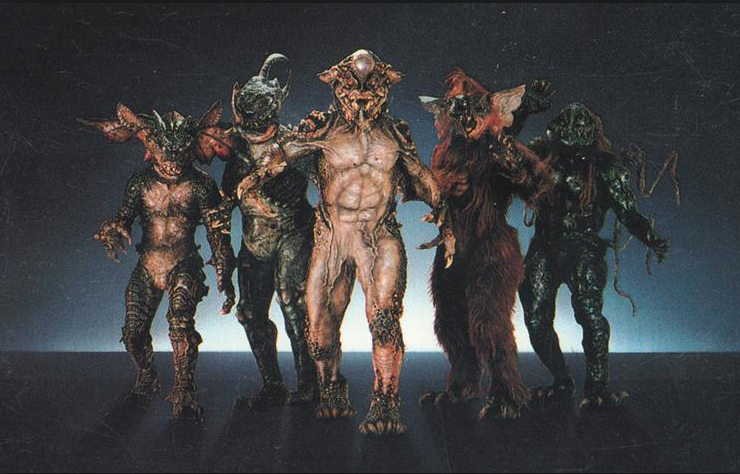 And so the Zoanoids are despatched to retrieve the armour while our nerdy kid has to fight them off with his new-found powers. I remember being thrilled at the fight sequences, laughing at the gags and squirming at the icky transformation sequences.
It wasn’t until I happened upon The Guyver (Koichi Ishiguro, 1989), an animated series, that I realised that Mutronics was actually an adaptation. Originally released in twelve parts, The Guyver animated series revived my interest in Manga just as it was waning. Although there were a number of things compromised in the adaption process (scale and tone mainly) it was clear that Mutronics had got a lot of key details spot on, even down to the miniature of design. The animated series, of course, was far more expansive. Taking the idea of bio-engineering and taking it to its fullest the series treats us to bio-weapons, hyper-Zoanoids, multiple Guyver armours and other crazy stuff. 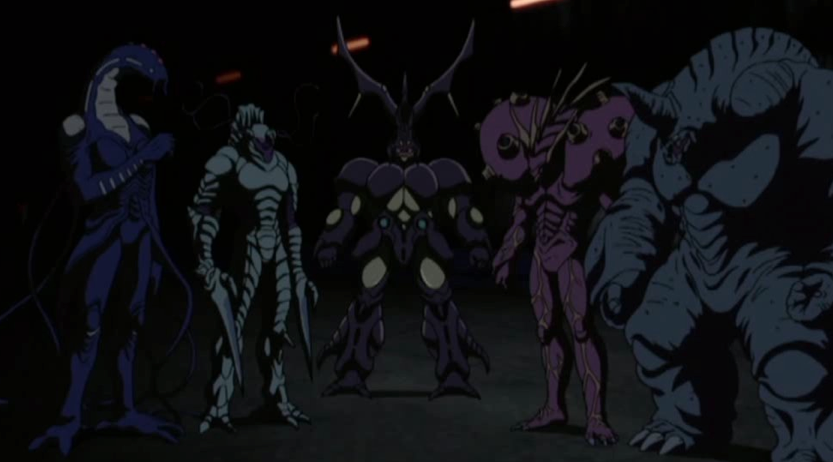 The cartoon created a whole universe of brilliantly conceived monsters set against a plot that explains the origins of humanity itself. All of a sudden, Mutronics started to feel a little silly and small by comparison.

Guyver: Dark Hero (Steve Wang, 1994), the sequel to Mutronics, throws in more of the source material and improves on the first movie in a number of ways. The suit, now sporting bigger deltoids and a new paint job is an almost exact match for the animated version. In fact, I’m happy to go on record saying it is probably the most successful superhero costume translation ever committed to screen. 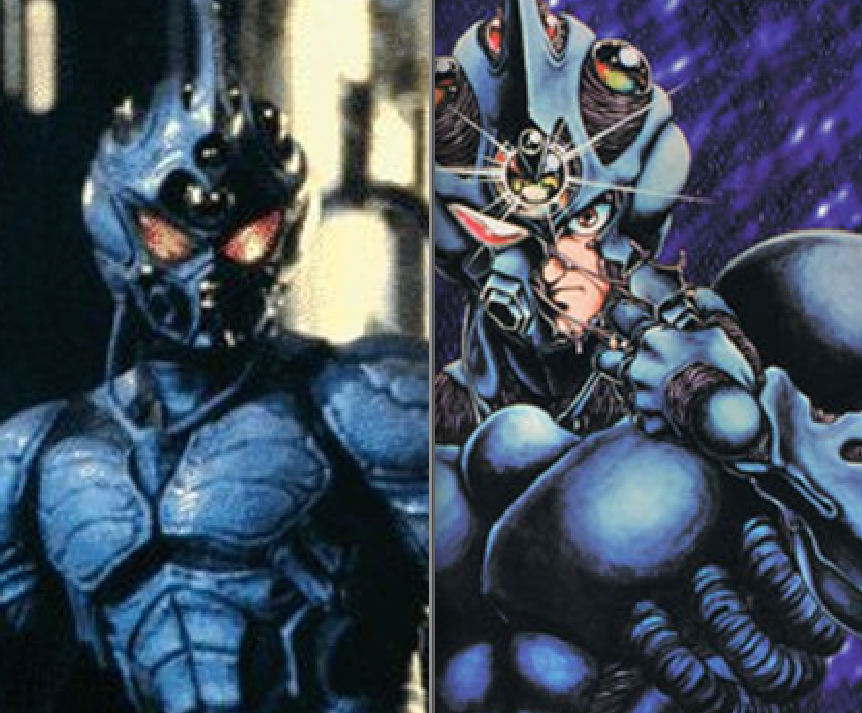 The plot, involving aliens seeding our planet for genetic experiments and accidentally giving birth to the human race, is properly fleshed out and the Zoanoids are bulkier and more in keeping with the original designs. Even specific fight choreography is kept. More than that Dark Hero makes for a thrilling action film. The martial arts sequences are breath-taking having been spectacularly choreographed and shot. They are fast, acrobatic, ingenious and exciting.

Even more impressive considering how restrictive the suits must have been. To this day it baffles me how Steve Wang and a tiny budget can get a guy in full body armour to do acrobatic flips and stunningly complex Kung-Fu kicks and yet we still can’t get a version of Batman that can turn his head properly.
Unfortunately, in between fights there isn’t that much to love about the movie. It’s devoid of atmosphere, with a pale colour palette and next to no contrast in the image. Actors are so-so, and the appearance of a young David Hayter in actor mode offers little else than a curiosity. But once the monster action starts you’ll instantly forgive its missteps.
Of course this is not all the Guyver action available. The cartoon series itself was based on a series of comics (which I’ve yet to read) and in 2005 a whole new animated series was released. I checked out the first episode and a few minor things aside it was almost identical to the original, so I felt less compelled to watch it.
I have, however, gone back recently and revisited the film that started this all off for me. Alas, Mutronics doesn’t hold up all that well. It looks more expensive than Dark Hero and manages to keep you engaged between actions scenes. However the fights are nothing compared to the astonishing choreography found in its sequel and the humour, especially that emanating from the ‘hilarious’ and ‘non-offensive’ rapping black Zoanoid is frankly embarrassing. It’s main draw, however, is the monster design in particular Lisker, one of my favourite movie monsters ever.  Look at him, just look at him: 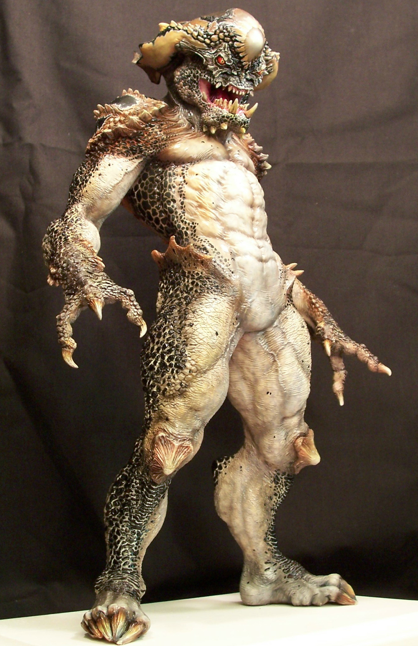 Gorgeous isn’t he? A beautifully designed monster suit and one of my three choices to do battle in the Monsters Brawl Tournament, he is a marvel of practical effects and puts recent CGI efforts to shame.


Of course the monster design throughout the whole series is fantastic, regardless of the medium.
It’s a series of movies and cartoons made almost entirely for people like me. If you like martial arts, if you like super-heroes and, most of all, if you love monsters you’ll find something to like in any one of these works. 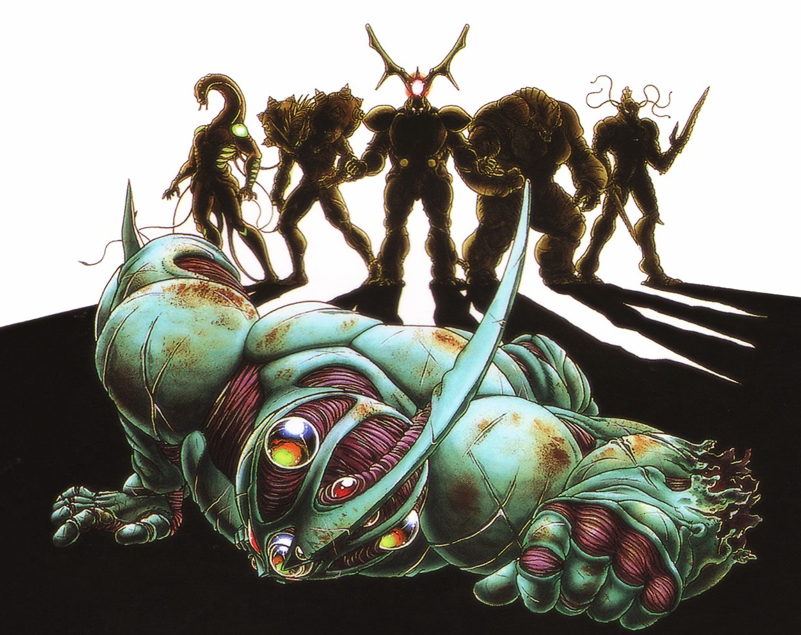