Genre filmmaking often tackles subjects that explore important concepts, from the murky depths of the human psyche, to the nature of mythological heroes, to what might be waiting for us in the future.  Yet by definition genre films are often generic, even sterile.  These films often require huge budgets and elaborate production to fully realise these ideas and images yet often have limited resources on hand.  As such genre filmmakers often find themselves caught in the middle of this dichotomy and more often than not it suffocates them.  Stuart Gordon, however, is something of a wizard in the lower-budget end of the genre spectrum.  Gordon deftly leaps the pitfalls inherent in genre filmmaking creating works that never fully feel exploitative but are always challenging, that never look cheap yet retain their hand-made charm.  Here are three of his moves that show quite how talented a filmmaker Gordon is.


The first of two H.P. Lovecraft adaptations on this list, From Beyond is a slimy, garish and throughly bonkers science fiction horror.  Concerning an experiment in a run-down building, Gordon uses the low-budget trappings of what is essentially a one location shoot with four principle cast members and creates a tense, claustrophobic and really slimy nightmare.  Featuring budget icons Jeffrey Combs, Barbara Crampton and Ken Soree, the film has a cast that can deliver all the requirements of stock genre characters while also providing offbeat and risky performances.  How many quirky scientist characters do you know who end up bald and with a fleshy antenna?  How many attractive bespectacled female psychologist characters do you know who end up being sexually relieved by a Shoggoth?  How many brave, tough cop characters do you know who end up running round in a pair of tiny white briefs?  Despite their generic beginnings these characters go to bizarre places and thanks to their brave performers it never feels too much. 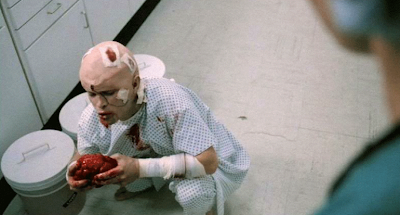 The film swerves through a slalom of tonal and genre changes too going from b-movie creature feature, to science-playing-god melodrama, to hardcore skull-cracking brain-eating gore pic, to complex and possibly problematic sexual politics drama and all with such confidence you never really notice.  It allows the film to feel safe yet slips in challenging and provocative if not utterly shocking moments (see the aforementioned non-consensual Shoggoth foreplay). 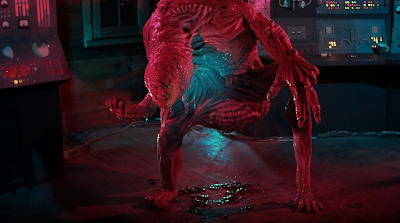 Speaking of creatures we have a dimension-full.  We get flying killer fish, possessive trans-dimensional monsters and a fucking great head chomping worm.  All brought to life with the craft and charm of KY drenched practical effects. 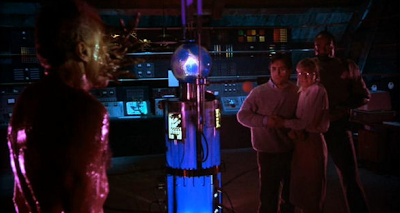 This collage of tones and genres, soaked in violet and pink, is garish and absurd.  As the credits roll you feel less like you've watched a film but rather woken from a slightly dirty nightmare.  You feel weird, a little bit seedy and you know damn-well if you tried to describe it to anyone else it would just sound ludicrous.  Yet for the duration of its running time From Beyond is an absorbing nightmarish kaleidoscope.

Adapted primarily from Lovecraft's excellent short story A Shadow over Innsmouth (with only the set-up borrowed from the author's Dagon) Dagon is a criminally over-looked monster movie.  A hapless couple find their yacht washed into a creepy sea-side fishing town.  When his wife goes missing our hapless, and slightly nerdy, hero goes looking for her only to find the town filled with fish-god worshipping cultists all of which have started to take on the scaly physical characteristics of their chosen deity.  As the sense of dread and threat intensifies and the deformities get fishier we soon discover something long forgotten swimming in our heroes past. 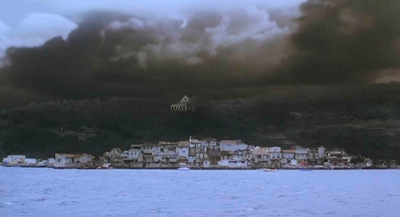 The production on this film is incredible.  The crooked and sodden streets of this demented town are so wonderfully realised that every frame drips atmosphere.  Whether it was a studio built set or location it's hard to imagine Gordon could have pointed the camera anywhere without getting an amazing shot. 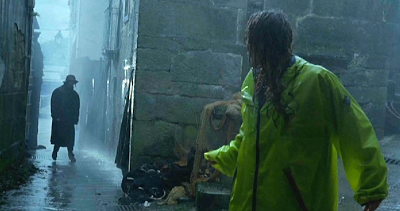 That is not to say Gordon had it easy as again he is balancing tones deftly.  The movie features frequent humour yet never at the expense of the threat.  Even the presence of potentially hokey rubber tentacles don't subvert the genuine horror on display.  These creatures mean business and the stakes are high.  Against all odds this is a film that is both fun and horrific.  It's also largely faithful to the source material, our hero's escape from his hotel room is an almost exact realisation of Lovecraft's own set-piece. 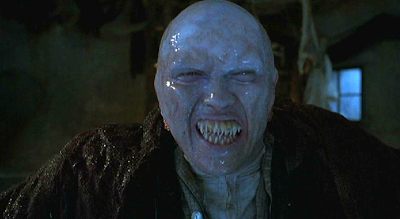 Dagon is a completely satisfying gothic monster movie and one that fully deserves more attention than it has had so far.

A friendly drifter is hired for some odd-jobs by some dodgy looking guys.  The guys turn out to be mobsters and one of the jobs turns out to be a hit.  The drifter accepts, but rather than pay him the mobsters torture him for days and leave him for dead.  The drifter survives, however, and is nursed back to health by the woman he widowed.  Unaware of his part in her husbands death she begins an affair with him while, once healed, he exacts revenge on the mobsters that tortured him. 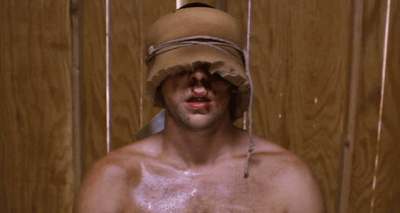 Sounds like a fairly conventional erotic crime thriller doesn't it?  This is Stuart Gordon remember which means there is nothing conventional about it.  At all.  Essentially a study of how the humanity can be beaten out of anyone, the movie features all the sex and violence you'd expect but also goes into some pretty unexpected places.  It is therefore very difficult to talk about this film without utterly spoiling it so I thought I'd take some things out of context to see if the very mention of them is enough bait.
So this seemingly conventional thriller includes:  male nudity, a lump on the head the size of a pineapple, both sets of gentiles on one person, Veron Wells, a demon that shits out of its forehead, George Wendt and golf. 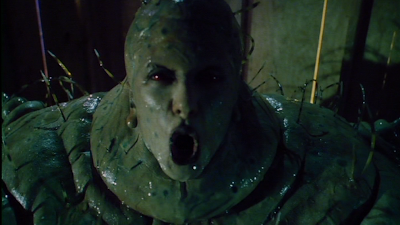 That's all you're getting.  Just go watch the son-of-a-bitch.

So there are three Stuart Gordon movies that will satisfy all your genre needs while also challenging you and, in many places, making you feel a little icky.  And his filmography is brimming with movies like this.  Always reliable, always entertaining but never safe.