Fist of the North star comes infuriatingly close to being a solid post-apocolyptic martial arts extravaganza.  It gets so many things right, yet gets enough wrong to prevent it from ever being a fully satisfying experience.
In the early 90s Manga boomed on VHS in the UK.  With Akira leading the charge a stronghold on the shelves of video shops was established paving the way for the likes of Dominion Tank Police, Vampire Hunter D, Urotsukidoji: Legend of the Overfiend and Fist of the North Star.  As much as I loved Akira I was by no means a Manga obsessive, yet there was something about the blend of martial arts and post-apocoplyptic conventions that drew me to Fist.  It also had an 18 certificate, so I knew it was going to be good.  To be honest, whether it was good or not never entered my mind.  What it was, though, was 110 minutes of fast-punching, vein splitting, head-exploding mayhem with a karate Mad Max fighting super-powered warriors and steel giants.  Also, Uncle Phil from Fresh Prince did a voice.  I loved it.
So it comes as a surprise, to myself more than anyone, that I've only just seen the live action version.  I'm not sure what has taken me so long.  It's not got a great rep, but that rarely stops me.  Whatever the reason I've finally made my way through it. 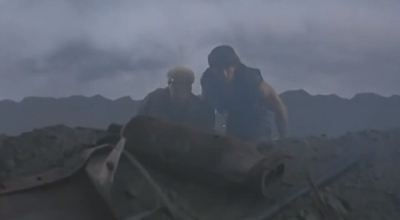 Let's start with what works.  For a fairly low budget affair the film looks pretty good.  The sets, Frankensteined from rusting metal and old machine parts, are hardly massive but convincingly create a destroyed civilisation.  It's also nice to see a cameo from some borrowed Spacehunter: Adventures in the Forbidden Zone bikes.   For shots that need to hint at a larger scale some effective model work is used and atmosphere is added with bruised skies and a light fog that impregnate the world with foreboding.  As an exercise in low budget production design it is a genuine success.

The practical effects are pretty good too.  Considering most of the horrific wounds take place on bare-chested males there are few easy ways to cover seams, yet brains throb and veins open gushing red into the air without anything given away.

It is by no means as gory as you'd expect but a lot more so than most martial arts movies.  The use of make-up effects also allows some of the films fist-fodder to be quite distinctive through liberal use of horrible scarring and deformity.
The whole thing is quite nicely shot, the main character Kenshiro is a faithful visual recreation of the character from both the animated movie and the comics and there are a couple of decent martial arts sequences.  The orchestral score also gives the film the impression it is far bigger in scale than in fact it is.
So why doesn't it work?  Well for the most part it is because it doesn't push what it does well far enough and that is unfortunately down to how seriously the film takes itself.  Although good when they happen, the gory moments are few and far between and despite a few fun marital arts sequences, most of them are sluggish and unimaginative.  This features none of the intricate and fast choreography of contemporary martial arts films, but rather the endless slow-mo round housing of 90s western martial arts.  Not that I have anything against that kind of fight scene, it's just most of the fights don't even do that so well. 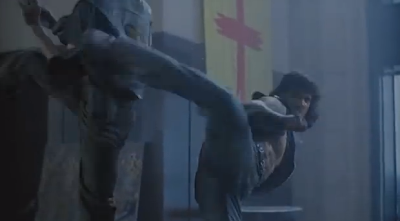 So rather than going full-on with the martial arts and head popping it shoots for poe-faced melodrama.  This wouldn't be so bad if the cast where up to it, but this unfortunately is another problem.
I like Gary Daniels.  He is a gifted martial artist, has some degree of screen presence and really looks the part as Kenshiro.  But he isn't the most naturalistic actor and so when saddled with turgid and stagey dialogue it often comes across like he is reading from cue cards.  And it is in these moments that the visual translation of the character backfires.  It's very hard to take clumsy dialogue about lost love, murdered Fathers and destiny seriously when the actor speaking it has massive Rambo hair. 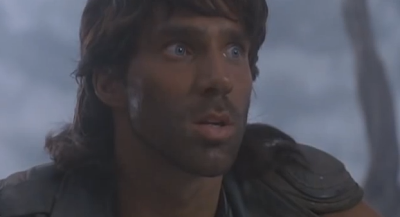 Also working against it is the fact that the look of the lead is the only thing that has been lovingly translated.  None of the imagination of the source material has survived.  Rather than feeling like a sweeping, mythological epic it really just comes down to a guy in shoulder pads wandering round and occasionally kicking some thugs.  For a film that succeeds in convincing us it is of a scale far greater than the budget dictates, it does a damn good job of making everything seem really small.
And this is its achilles heel.  Everything that works for the film also curiously works against it.  It constantly undermines its own ahcievements and although a spurting vein of imagination and self-awareness would have earned it considerable good-will, its desperation for the audience to take it seriously has the opposite effect.
If you haven't cottoned on by now this site is about celebrating movies and television.  As much as we label these as reviews they are more like recommendations.  As such I rarely write bad reviews, opting to ignore the films that I feel might waste your time while pushing you in the direction of movies you might find interesting.  And this review is no different, because despite everything I have just said I still enjoyed Fist of the North Star.  It is good fun and there is lots to like, but with a little more work it could have been awesome.  And that is really frustrating. 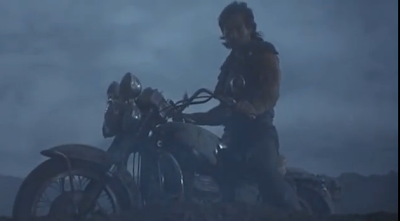