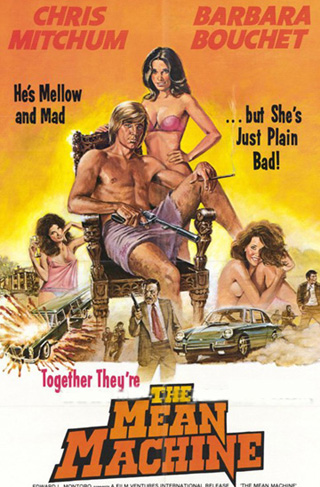 The poster for Ricco the Mean Machine evokes a Bondesque adventure filled with danger, suave men and glamorous women all sealed in a thin veil of sleaze that suggests the film might be a little more risque than 007's normal assignments.

It is that kind of film... yet it really isn't. Like Hellraiser's lament configuration, Ricco is a puzzle box that once solved opens up a world of glorious agony and perverse pleasure.  I have such sights to show you...

Chris Mitchum, son of Robert, takes the title role of Ricco. Released from prison, Ricco guns after the big-time mob boss who murdered his father and stole his girlfriend. One can see why the son of Robert Mitchum might seem like a canny piece of casting. Not only does Ricco have a badass name, and star in a film with a badass title, he is out of prison and taking on the mob. So who better to cast than the son of a man who was a tough looking bastard with hands that could unscrew a gasometer? Ladies and gentleman, let me introduce you to Chris Mitchum. 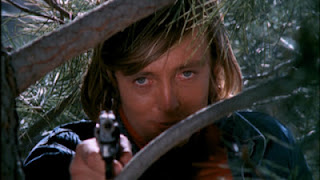 Or is that Prince Valium from Spaceballs?  Mitchum Jr is hardly the brick shit-house his father was.  Think I'm being unfair?  Check out the fight scene in the middle of the trailer.

It's like watching someone beat up a Blue Peter presenter.

Joining Mitchum Jr on his mission of fey vengeance is the gorgeous Barbara Bouchet. 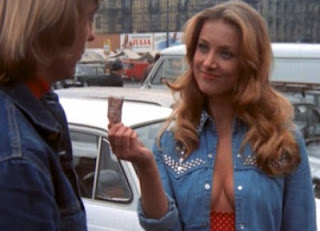 Bouchet plays a con-artist that keeps Ricco on his toes.  Yet don't let that fool you, she is anything but empowered in this film.  Her particular style of grifting is to distract men with an alarming selection of revealing outfits which, for some reason, the camera spends a lot of time lingering on (must have been a tripod malfunction).

The film drips misogyny which alone threatens to render the film thoroughly unpleasant. Yet this is taken to such ludicrous extremes it is hard not to be entertained in some form. At one point Bouchet pulls the age-old 'look sexy to distract the guards' ploy. Normally all that is required is a little flirting or a provocative neckline. Yet these are not guards, but mob thugs. Thugs in a car. On a bridge. In the dead of night. In the mist.

With such variables Bouchet's keen criminal mind quickly develops the only strategy with any chance of success. She strips entirely naked and proceeds to dance sexily in front of them for TWO FULL MINUTES.  I don't think I'm out of line by suggesting that the scene is a little gratuitous. I normally try and keep the pictures clean, yet this one goes some way to highlight quite how absurd the sequence is. 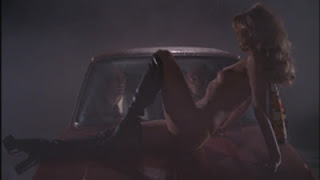 Unfortunately, misogyny and a weak lead are not the films only problems. Check out the poster below: 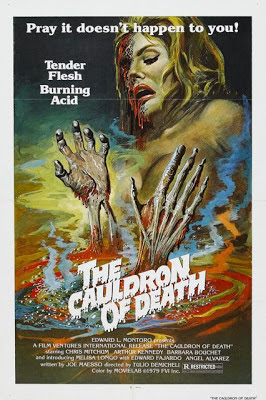 Looks like a different film doesn't it? Well it's not. This is the poster and title put together for the American release. It reflects one particular scene in the film, a scene so graphic it somehow manages to colour the whole movie a nice shade of gruelling horror.

It starts with the mob castrating a treachrous member of their gang. This does not happen off camera, nor do we cut-away at the last minute. We see every detail. It's like watching someone rip a drumstick from a freshly roasted chicken. Only it's a penis.

One could argue that it is an attempt to even out the nudity a little yet I doubt the response to this scene from female audiences would be the same response men would get from Bouchet sexy-dancing on the bonnet of a Citroen. So one could argue, but one would look like an idiot.

But it doesn't stop there. Once removed of his little chum, the poor bugger is then tossed into a vat of acid. It is established early on that this is the mob-boss's preferred method of disposing of his victims and, like the above de-wanging, we are not spared any details.

Ricco the Mean Machine is a thoroughly nasty film made palatable only by how utterly preposterous the whole thing is.

It is a film you won't forget, not necessarily for the right reasons.