Released in 1980, Shogun Assassin (Robert Houston) gathered a cult following. Once released on video it became notorious as its torso-rending action caught the inevitable attention of those carrying their 'video nasty' stampers. This controversial work was sourced from two Japanese films, themselves the first in a six-film series.

The Lone Wolf and Cub films were based on the manga by Kazuo Koike and Goseki Kojima and whereas most films described as “comicbook” are colourful, ridiculous and camp, this series utilized the narrative techniques of sequential storytelling to create a story told primarily though image and sound. Dialogue and motion are used sparingly, yet when they are they can be all the more effective. 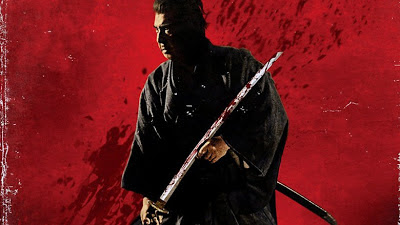 That's not to say the films don't know when to be ridiculous and they are most famous for the ludicrous arterial jets left by the sword of our main character, Itto Ogami. This, the first of three articles, will take you through the films culled for Shogun Assassin.

Sword of Vengeance sets up the inciting incident and the main narrative threads of the series as Shogunate executioner Ogami is framed by plotting usurpers and goes on the run with his infant son Daigoro. Now shamed and hunted, Ogami seeks to track down those responsible for his fall from grace (not to mention the murder of his wife) while restoring honour to his family name. 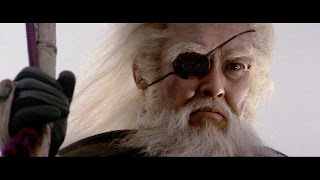 His enemies, the Yagyu clan, and occasionally their leader Retsudo crop up throughout the series however the plot of each story primarily revolves around the assignments Ogami and Son take on to earn money. As such, newcomers to the series may feel a little baffled by the lack of closure at the end of Sword Of Vengeance. Once Ogami dispatches a gang of thugs he had been hired to kill the credits roll, with no mention or sight of Retsudo or the Yagyu.

Yet the film is extremely satisfying in many other ways. Although Ogami, played by Tomisaburo Wakayama, doesn't have the physique of a traditional action hero, his presence and poise ensure your eyes are never anywhere else. He perfectly embodies the ebb and flow of the film itself, calm and understated, even graceful, yet ever coiled and ready to spring into a bout of bloody eviscerating.

And it is very, very bloody indeed. In all of the films blood flows freely and limbs rarely stay attached. Yet in the case of Sword of Vengeance it is rarely nasty. Brutal, yes, but also highly amusing, not unlike a Tom and Jerry cartoon. Although unlike Tom these poor bastards don't recover quite so well.

Bloody it may be but the real savagery on display is in the depiction of Feudal Japan. This is a world where it is honourable and just to kill oneself in service of the ruler, yet outrageous to merely point one's sword at a symbol of said ruler. When we first meet Ogami he is fulfilling his official duty by beheading a child (who happens to be of high rank in a clan), yet he is respected and well paid for such honourable service. It is only when he abandons his duty to earn money killing thugs and assassins that he becomes, in his own words; a “demon”. The film is never heavy-handed enough to outwardly criticise the bizarre standards, yet depicts them so frankly that overt critique isn't necessary.

Despite the subject matter and violence Sword of Vengeance is far from exploitative. It is a big bloody slice of Japanese history (albeit it spiced up with a little artistic license) and if you can stomach the amount of red travelling through the air then you'll also find it a hell of a lot of fun.

Despite being made the same year, with the same cast and the same director Babycart at the River Styx is a very different beast. Despite being filled with a lot more action its pace seems somewhat slower, perhaps due to there being less urgency in the plot. The tone is also a little different, this one feeling a little more unpleasant at times.

Ogami's assignment this time round is to assassinate a man intent on selling the secret to a lucrative dyeing process who is being escorted across Japan by three fearsome bodyguards. Yet Ogami's mission is constantly interrupted by the Yagyu clan who this time have sought the help of a team of female assassins. 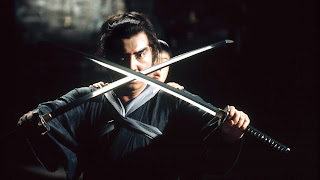 While Ogami slowly wanders through the country he is repeatedly attacked by assassins who he dispatches in a number of violent ways. Because of how relentless these deaths are one would not be blamed for developing gore-fatigue. This became the case for me when some of the wounding presented on screen got a little too detailed, especially against his female opponents.

Women don't fair well at all in this film. The female characters from both films so far have been either a mother, a prostitute or a killer. Sayaka, the head of the female assassins, in this case starts off as a merciless killer. When placed in a situation where her, Ogami and son have to rely on each other's body heat to survive maternal instincts are, in a somewhat unsubtle way, aroused and she eventually gives up her blood-lust for the pair. Women in feudal Japan where actually seen in much the same way. Early power, independence and involvement in combat, such as the lead assassin here, gave way to the increased indoctrination of expectations that women where at the service of their husbands and sons. So although this film could be read as being misogynistic, it could also be argued that it is merely representative of the time and Sayaka's transformation an allegory for Japanese women in the period altogether. Regardless, women get a rough deal.

The body of the film is therefore Ogami violently fending off random attacks from women and then, after receiving multiple wounds, spending time recovering. The main thrust of the plot doesn't kick in until the last half hour of the film and that is why the film feels a little lost and, at times, sluggish. This could well be intentional as the techniques employed are all subjective putting us firmly in the place of an exhausted Ogami. Yet this doesn't make it any more fun.

However as a display of technique this film is masterful. The camera is so carefully controlled, so precise in what it is trying to capture that it is almost hypnotic. Soundscapes are also created to connote impending threats which allows us to sense danger in the way that Ogami does, without any tacky 'samurai-sense' effects.

Furthermore, this is a film that, for all its reserved emotion and stone-faced slaughter, has a real heart. The relationship between Ogami and Daigoro develops leaps and bounds and an unspoken communication and trust develops between them, culminating in an amazingly badass sequence involving a well. For all the blood and blades it is these quieter moments that leave the biggest impact.

The final element that saves this film is the iconic masters of death. The three bodyguards Ogami has to overcome are wicker-hatted death machines and an obvious visual influence for Big Trouble in Little China (John Carpenter, 1986). These striking characters eschew elegant swords and instead opt for iron claws, clubs and spiked gloves which, in a final sequence that returns the film to it's hysterical red-gushing form, they use to devastating effect.

Babycart at the River Styx is a fan favourite for many of these reasons and despite its flaws there is a lot of interesting stuff going on. It may not be the best, but it's the one you'll talk about most. 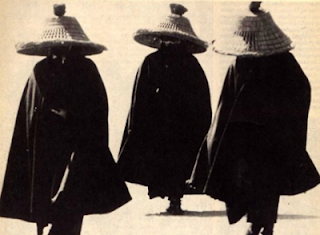