Icons of the Overlooked #3: Judge Dredd 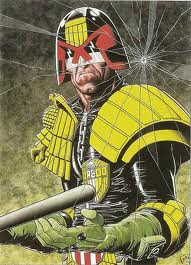 Exploding onto Britain's comics scene at the same time punk was exploding over Britain's streets, Judge Joseph Dredd's exploits have graced the shelves of newsagents on a mostly uninterrupted weekly basis. He is a British institution and yet few people in Britain know much about him. Outside the UK even less so.

That is of course with the exception of the movie, but we'll come to that in good time...

Dredd is a Judge of Mega-City 1, a future American city, and is cop, judge, jury and executioner all in one. He is emotionless and inflexible, ready to fine, imprison or execute anyone who breaks the law regardless of who they are. He is the ultimate badass. He is also a walking satire of the increasingly right-wing politics of the (then) current American movie heroes and the fascist fist desperately trying to close its digits on British counter-culture. Permanently wearing his helmet, he is a faceless justice dispensing machine. We may be on Dredd's side, but we are also meant to enjoy his actions with a degree of irony.

Well, most of the time. Unlike most traditional characters, Dredd never develops. He is the exact same person now as he was back in 1977. He may be older and he may learn something every now and again, but other than that there is zero character development taking place. But if Dredd is a solid rock, then the narratives around him are a swirling whirlpool of shifting tones and perspectives. One minute we are seeing a Dredd story satirising reality TV (way ahead of it's time I might add) in a story that fully acknowledges how ludicrous the world he inhabits is, the next Dredd is a superhero taking down evil mutants in a straight action adventure story. Then, when we are least expecting it, we get gut-punched by a story, like the hope-crushing Judge Dredd: America where Dredd is clearly the villain of the piece. These are not an Elseworlds or a What If? story or a new creative arc, its all pretty much by the same writing team (well, John Wagner) and all in the same continuity.

So when someone comes to try and introduce Dredd to a wider audience by making a feature film you can see the problem. How do they decide on a tone? How do they realise this crazy future-scape without spending millions of dollars? How do they make that money back when our lead character is relatively niche and an un-changing fascist bastard? 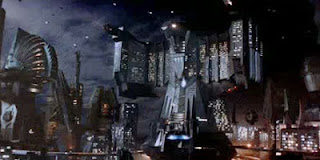 Now before we start let me make this clear; I don't hate this film. In fact, I enjoy it quite a bit. As a big, imaginative science fiction adventure it's bloody good fun. There are big guns, massive robots, cyborg cannibals, great miniature work, an amazing ensemble of line-chewing accents and some absolutely incredible design work. Oh, and Alan Silvetsri's score is, as I believe the kids say, epic. 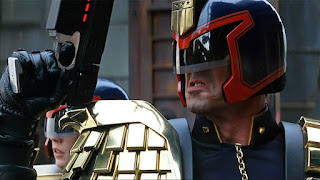 And for the first fifteen minutes this film almost convinces you they've settled on a tone that nails the whole world. Everything at the start of the film is so brilliantly realised you can't quite believe they managed it. Then Dredd takes his helmet off and with it (not because of it) the whole film slowly strips away everything that makes Dredd, well, Dredd. He even has a little kiss at the end.

That's the equivalent of Ghandi saying “fuck you asshole” and laying waste to his detractors with a mini-gun at the climax of Attenborough's biopic.

So not a bad film as such, but it does go to show how hard it is to truly capture the essence of Dredd and market him to a mass audience.

So how does that bode for the new Dredd film? Purists seem to be complaining that his shoulder-pads are too small and his helmet is too big (come on, you're better than that). I happen to think Karl Urban's Dredd looks the spit of Cliff Robinson's drawings, while the outfit is very much early McMahon.

Yes there have been delays, yes there is rumoured trouble behind the scenes, yes the budget seems tiny, etc. But if this film brings any more readers Dredd's way then it'll be worth it. 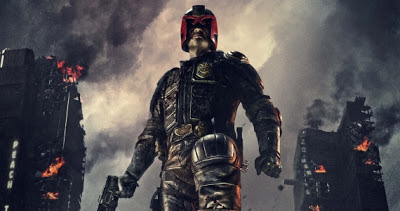 Will it make Dredd a household name? Probably not, but then should it? It's not that Dredd is on the sidelines waiting to play with the Captain America and Batman, Dredd doesn't belong there. Dredd's too British for that.

You see despite being around for over thirty years Dredd hasn't softened, hasn't sold out. He's still the tough old bastard he was from day one and sits where he belongs, in British sub-culture using irony, sarcasm and the blackest of comedy as much as his blazing Lawgiver.

After all this time, and all these stories, Dredd is still punk. 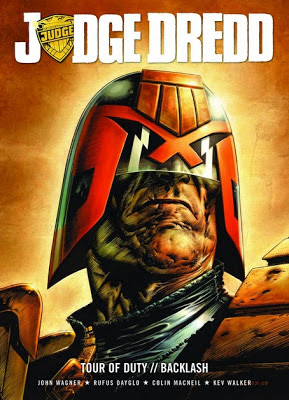