Knock-off could represent either the nadir of Jean-Claude Van Damme’s career or his highest peak, depending on what you look for in a direct to video action film. It is a film layered so densely with logic-dodging brain punches that it is hard to believe it was written by the same guy who wrote Die Hard and directed by Hong Kong auteur Tsui Hark.

Along with John Woo and Ringo Lam, Tsui Hark was a fundamental figure in the wave of Hong Kong action films that made their way to western shores during the mid-nineties. Despite working primarily in well worn genres, Hark still demonstrated a proclivity for experimentation and innovation. Once Upon a Time in China (Hark, 1991) is ambitious in both scope and narrative while The Blade aka Dao (Hark, 1995) exuberantly uses the ‘shaky-cam’ techniques now so common in modern action cinema, albeit a decade earlier.

Hark’s camera moves and frames in a way not too dissimilar to that of Sam Raimi’s. Like Raimi his frenetic, subjective camerawork can serve to elevate material from gritty brutality to an exciting, energetic and delirious dance. This gives a fresh energy to otherwise relatively straight forward subject matter, yet because the subject matter and logic of Knock-Off is so out there in the first place, the application of this style just makes the film all the more ludicrous. 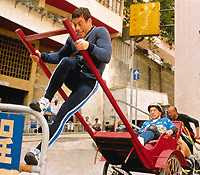 This brings us neatly to the story. Van Damme plays a fashion designer/clothing retailer who, with his new partner played by Rob Schneider (who is by no means the worst thing in this film, which should tell you plenty), attempts to put his past life as a bootlegger behind him. Unfortunately for them, their legitimate products are being intercepted and swapped for cheap knock-offs by Russians (I think) who then sew tiny button-sized explosives into them. Once these explosive jeans have been shipped throughout the world the Russians would have a stranglehold on the entire planet. I watched this film not twenty-four hours before writing this article and I can’t remember for the life of me why the Russians would want to do such a thing. But let's not let a little detail like motivation get in the way of all this fun. The film-makers didn't.

So it is a film about exploding trousers, basically. As the plot unfolds, just about everyone turns out to be either a bad guy or a CIA agent, or both, and a shirtless Van Damme eventually saves the day. Not crazy enough for you? Okay, let me run you through some of the films more inspired moments.

Add to all this Van Damme’s strangulation of most of the dialogue and Hark’s use of slow-motion, strobing, ghosting, freeze frames and every other trick in the book makes most of the film seem like a montage or drink induced hallucination. It's the kind of film you end up thinking you imagined.

When we arrive at the film’s climatic sequence, however, it threatens to become a competent, and dare I say exciting, action film. The fist and gun fight aboard a cargo ship is directed with a controlled energy and clarity not seen anywhere else in the film. Suddenly all the elements that previously butted heads are now working together. It almost makes one wish the cast and crew had a shot at a real story.

But what we do have is a marvellously insane 90 minutes that does not fail to entertain. In fact, the only thing stopping this from being a masterpiece of unintentional* entertainment is that it is not called Hot Pants.

This is a film I recommend with caution: you are either going to love it for it’s flaws or just plain hate it for them. 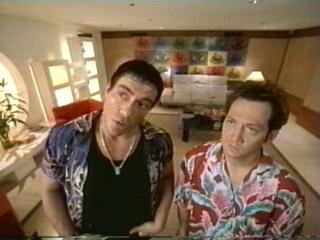 *I say unintentional, but I would put money on that some of the creative team, if not the director himself, is just taking the piss.