How Hard Can it Be? - The Punisher and the Big Screen

Marvel have recently been doing very well in translating their characters to the big screen, either through their own studio or in collaboration with others. They are not everyone's cup of tea, yet it's difficult to argue they haven't captured the spirit of the comics and translated potentially problematic characters successfully with very little compromise. A hammer-wielding Norse God? A guy dressed in stars and stripes who throws a shield? A teenager in a red and blue gimp suit swinging around New York? It would not be difficult to make these characters appear un-engaging and utterly ridiculous and yet the creative teams responsible makes the whole process look easy.

So why is it that The Punisher, one of the most uncomplicated and easily translatable characters in the Marvel catalogue, has yet to have a solid film of his own.

And they have made three of the bastards!!!

That's right, The Punisher has had three films made about him and not one of them is entirely successful. I can understand the Fantastic Four being a difficult sell, but The Punisher is hardly high concept. Frank Castle, an ex special forces officer, sees his family murdered by the mob and dedicates his life to fighting street crime. No stretchy arms, no astral projection, no spandex, just a guy and his guns taking out street punks and mob enforcers. The only outlandish(ish) trait he has is that he wears a skull print on his chest.

Surely this is not a concept too hard to handle? Cinema is littered with well made revenge films. Why can't you just make another where the main character wears a skull tee-shirt? Is it really that difficult? It's not as if each of the three attempts are completely without merit though, so to determine what went wrong with each we should really take a closer look.

The first attempt to get The Punisher moving was a vehicle for Dolph Lundgren and is, in my opinion, close to being the most successful of the three. 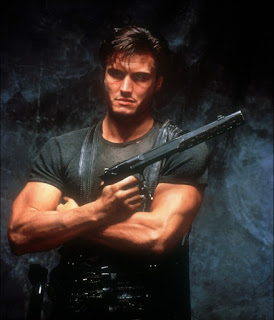 Only four years after making a splash punching Carl Weathers to death and only his third outing as a leading man, Lundgren surprisingly puts his body away. Gone are the oily flexings synonymous with 80's action cinema, Lundgren instead wears lank hair, pale skin and dark rings around the eyes. He looks like shit, to be honest, and so would you if you lived in a sewer only to come out at night. So although Lundgren doesn't necessarily act, he certainly looks the part. The films biggest success, however, is it's balance. It's an action film thats' just ridiculous enough to be fun yet gritty enough to not come off as camp.

Purists will complains about the lack of chest-skull and the change in the method in which Castle's family die (here it is a car bomb). These changes are a little bewildering, yet the main flaw is that the film just doesn't make much of an impact. Denied a cinema release in most countries, it is what we would now consider a text-book straight to video (well, DVD) action film. Efficient, just brutal enough yet lacking in any kind of ambition. 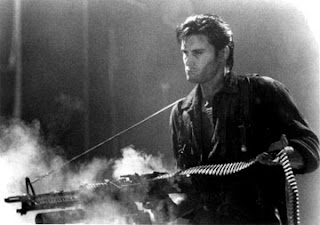 All in all it's hardly a terrible action film yet by ditching iconography and imagination it never feels truly worthy of being a Punisher movie.

Jonathan Hensleigh's attempt is my least favourite of the three. My frustrations arise primarily because there is so much about the film I like, it just never feels like a Punisher movie.

The film plays like a gritty seventies revenge film which is, in my opinion, the best way to handle The Punisher. The action is hardly epic, yet choreographed and shot with energy and clarity. Despite it's grit it is never nasty, balancing humour and violence expertly (the central fight sequence being one of the absolute highlights) and Thomas Jane makes for a potentially engaging Punisher.

The films biggest problem is that as an origin story Frank Castle only truly becomes The Punisher at the end of the film, meaning that for most of the story we have to put up with an intermediate version. 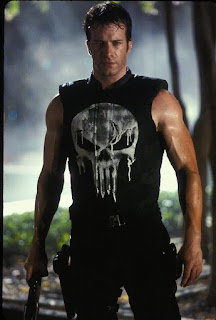 This Punisher decides against using his vast arsenal for the majority of the film and instead opts for making sneaky phone calls and taking incriminating pictures. C'mon, he's The Punisher, not The Photographer. He even tortures a man with a lollypop at one point because he doesn't actually want to hurt him too much. This, in addition to the fact that Thomas Jane seems to be wearing eyeliner kind of smoothes out the rougher edges of the living tank The Punisher is supposed to be.

Some put this down to the tiny budget of the film and that does indeed have an impact. Yet what little money there was could have been spent so much better. In this interpretation it is not merely the wife and kids that are cut down, but Castle's entire extended family are killed in a prolonged action sequence, compete with shoot-outs, car chases and exploding docks. By going for excitement rather than shock the scene loses the required impact and just feels like money that could have been better spent once Castle finally gets to unleash hell as The Punisher.

Then of course there is the cash blown on the climax, where Castle blows up a row of parked cars so that they form a flaming skull when viewed from above. It is a ludicrous moment so pointless (and by this point utterly cliché, having already been done in both the The Crow, Alex Proyas 1994, and Daredevil, Mark Steven Johnson 2003) that you'd think Hensleigh had money to throw away.


And I haven't even mentioned the fact that he's barely in costume for the film, that everyone seems to know who The Punisher is and where he lives, but rarely try and find him and a whole host of other problems.

Had this film simply been a low budget revenge film I think I could have looked past the problems and focused on whats works, but like Lundgren's this does not service the expectation raised by calling your film The Punisher.

War Zone is everything that Hensleigh's version wasn't to a fault. At it's best it is a gore-filled splatter fest full of great kills and black humour, at it's worst it's approaching Batman and Robin levels of garishness.

Ray Stevenson makes for a great Punisher. He's a lump of death in body armour, rarely out of costume and always packing heat. Despite minimal dialogue Stevenson gives depth to the character and there are moments of laugh out loud Tom and Jerry violence.

But it's just all too much. For every great moment, there is a moment of utter silliness. Take, for example, the opening scene. Castle drops into a mob dinner and begins to efficiently execute everyone at the table with increasingly inventive brutality. But he then decides to leaps onto a chandelier, hang upside down and spin shooting everyone that enters the room in a jump in logic so jarring it would have the creative team behind the Resident Evil films cringing. Why go to all the trouble of putting your actor through special forces training to get a sense of realism if you're then going to have him hanging off a bloody light fitting.

There are times in this film where the colours are over-saturated, the actors are over-acting and the audience is overcome. The whole thing feels like a ruddy-great knee-jerk in response to the criticisms of the last attempt. It just goes too far.

I would say, however, it is the most watchable of the three and great to throw on if you've had a very frustrating day at work.

There are lots to like in these three films, but none of them succeed in being either a straight action film or a gritty revenge film. I can't help but think if you could splurge all three together you might be on the right track.

But The Punisher will not be kept down. The rights are back with Marvel who are rumoured to be readying him for a TV show. Whether it will be good or not will be entirely down to whether they can find the right balance of all the things that make up The Punisher.

How hard can it be?