Frankenstein is the Monster from Hell 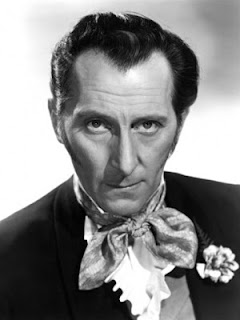 Martin is attending a party. While the orchestra unfolds gentle waves of delicate music and a man in a quasi-Georgian outfit swoops between the guests balancing a tray of impossibly stacked gold-foil confectionaries Martin captures the gaze of the Countess. She snakes seductively across the ballroom floor and, with brazenness greater than one would expect from someone who spends so much time crafting such an elegant appearance, asks Martin softly the question he hoped she’d ask:

“What are your favourite movie monsters?”

Martin tells her he favours the classics and enthusiastically lists those that have captured, and haunted, his imagination. Yet so enthusiastic is he that he refers to Frankenstein’s monster as merely “Frankenstein”. The faux par is compounded as a passing guest comments smugly that Frankenstein is the name of the creator, not the name of the monster and before Martin knows what is happening the Countess is looking at him like he’s got shit on his lip.

We’ve all been there.

Yet there is validity in referring to Frankenstein as one of your favourite monsters. 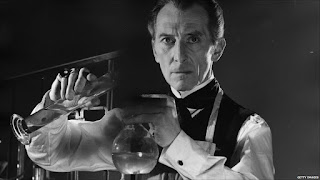 Christopher Lee's Dracula has, for me, become the iconic realisation of the literary monster, more so than Lugosi's. Yet the Hammer version of Frankenstein's monster has not burnt its image into my mind in the same way. It is easy to initially conclude that this is because each film presented us with a new monster, with not only different designs but entirely different conceptualisations.  The prime reason, however, that the monster was never as iconic as the Universal version was that Hammer films were less interested in assembling a monster, but in disassembling the creator.

In The Curse of Frankenstein (Terence Fisher, 1957) Peter Cushing provides a fairly conventional portrayal of Victor Frankenstein. He is a man of ambition and scientific skill convinced of the benefits he intends to bring to mankind. Yet so absorbed with the benefits is he that he can't see the horrors he must unleash to achieve them.  For the most part, Frankenstein is as sympathetic a character as the pitiful creature he creates.  As we see his gradual descent into villainy we want to reach into the screen and shake him back to morality.  Alas, the moment he sacrifices an innocent women to his creature is the moment he is lost to us, falling into the role of villain entirely. 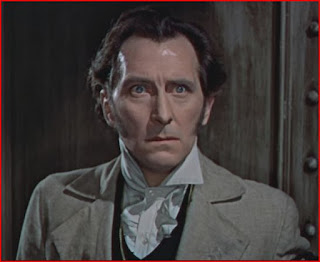 This struggle between ambition and evil permeates the next three sequels. As the Doctor dodges capture and execution to continue his unconventional medical experiments he openly displays a desire to advance medical science and compassion for his 'patients', yet equally displays callousness, a skill for manipulation and at times a complete disconnect with humanity.  Yet it is possible to argue that the disconnect with humanity is the objectivity a scientist this ambitious would need.  This is what makes Doctor Frankenstein such an engaging and layered character.  He is so brilliant and so utterly dedicated that you want him to get a grip and apply himself to more ethical pursuits.  But just as you reach out to try and rescue some hint of humanity, he sweeps your legs away with an act so monstrous even Dracula would be embarrassed to hang out with him.

By the time we get to Frankenstein Must be Destroyed (Terence Fisher, 1969) Victor Frankenstein has escaped capture by mounting a full-blown home invasion, blackmailing and manipulating a local Doctor and his wife into not only hiding him from the law but aiding him in his experiments.  There are absolutely no redeeming qualities in Frankenstein as he takes on the role of villain entirely, going as far to adopt the role of monster when he rapes the Doctor's wife. 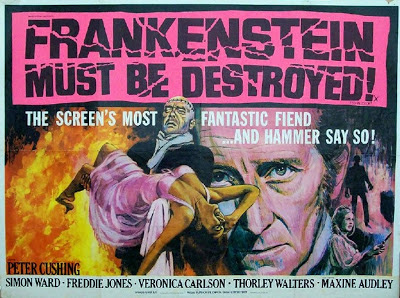 In Frankenstein and the Monster from Hell (Terence Fisher, 1974), Cushing's final portrayal, we find a seemingly mellow Victor in a prison for the criminally insane.  A former inmate, he has used his considerable aptitude for manipulation to take over the asylum.  He uses this position, however, to simply (or seemingly) treat the other inmates.   This, alongside the nefarious company he is forced to keep (psychotic killers, sadistic wardens and the prison director who sexually abuses not only the female prisoners but his own daughter), puts Victor in the unusual position of being the morally superior one.

Even when we eventually find he has been up to his usual tricks, it is the Frankenstein of old: caught between ambition and compassion, he is passionate and desperate to prove to the world he can save those who have passed on regardless of the boundaries he must cross.

The monster he creates is possibly one of the most sympathetic, yet is also one of the most successful. One begins to wonder that if Victor finally succeeded then the legitimisation of his work would allow him to leave behind the illegitimate practices that got him there. Yet, once again, the moment you start to see things from his side he reminds you of how appallingly monstrous he actually is. After revealing quite how manipulative he has been, he tops it all by suggesting the one entirely innocent character (the aforementioned abused daughter of the prison director) be forced to 'mate' with the monster.

What an inhuman, misogynist shit.

As you'd expect it all goes pretty badly for him and his creation is rather graphically pulled to pieces before his horrible intentions are realised.   Yet Frankenstein simply wipes down his hands and smugly theorises how he will improve the process next time round. We leave him having escaped scott-free with a whole asylum full of fresh 'donors' that no-one will miss.  As the last of Hammer's Frankenstein films we never get to see him stand trial for his crimes.  Unlike most monsters, this son-of-a-bitch has got away with it.

Cushing's Frankenstein is a unique incarnation. His gaunt body and unnaturally protrusive cheekbones presents a vision as iconic as any foam latex and face-paint creature put on screen. And whereas most monsters keep coming back to wreck more havoc, his creations are dead and buried by the time the credits roll. It is he, a human bereft of any supernatural ability, that returns for more.  A skinny scientist mingling with the princes of darkness, brutish serial killers and dream demons in the horror halls of fame while his many monstrous creations look in through the windows.

So the next time someone tries to smugly correct you, you can tell them to brush up on their Hammer because in these films, Frankenstein is both creator and monster.
Labels: Articles