Non-consensual sex on film is deeply problematic and one that requires serious consideration by both those committing it to film and those who consume it. However this article is not looking at the act itself, or the implications on gender representation it has, rather how these three films place the scenes into their narrative with a devil-may-care approach to tone and logic. How appalling the acts on display are take second place to an overwhelming sense of bewilderment at the process of decision making that lead to these creative choices. So take a deep breath, there will be alcohol rub for your soul on the way out. 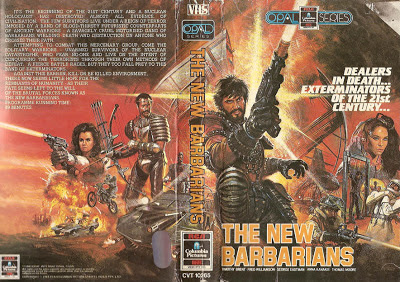 After Mad Max power-slid his interceptor into the brains of movie-going audiences, while at the same time displaying a template for an inherently cost-effective genre, there was a surge of copy-cat productions that flooded the market. The Italians, not one to pass up a chance to jump on the armour-plated bandwagon, cranked out some beauts of their own. The New Barbarians is a fine example of such a work.

In a post-apocalyptic wasteland a nomadic tribe of survivors are hounded by the oppressive Templars; a well organised and equipped fanatical religious order. Standing between the two is Scorpion, a rugged anti-hero with a cool super-charged car and shoulder pads. The film features some car chases, nice explosions, some relatively convincing splatter and the added bonus of Fred Williamson in golden armour, blowing up peoples heads with his explosive arrows. Y'know, the usual stuff.

Towards the end of the second act Scorpion is captured by the Templars and strung up in the desert on display. The leader of the Templars spouts his rhetoric as he gets ready to torture Scorpion into giving up his futile resistance. It's a fairly familiar scene and plods along without any real surprise...

Right up until Scorpion is sodomized.

Yep, the bad guy rapes the hero in front of everyone. Now Scorpion is by no means as iconic as, say, Han Solo, but narratively speaking this is the equivalent of Vader deciding against carbonate and feeling up Han while Chewie buried his face in his paws instead.

Scorpion is rescued and the third act plays out just as conventionally as the rest of the film. The scene in question has no bearing on anything before or after it and tends to leave you thinking whether you might have just imagined it.

Before Fred Ward took Remo Williams on an adventure, he took Lyle Swann; a motocross ace trying to beat a speed record, on an adventure of his own. During his record attempt Swann is accidentally sent back through time and into the Wild West. Once a band of outlaws spy his “mechanical horse” they pursue him across the desert until he takes refuge in a run-down town. There isn't a naughty word spoken and what little violence there is is nothing worse than you'd see at a Wild West show. All in all it's a fairly harmless piece of fluff, at least it is to start with.

I must say my spider-sense should have started tingling early on in the film. As Swann finds himself lost, though not yet aware he has been sent back in time, he decides to go for a bit of naked swimming in a nearby stream. As he does he is observed by Claire, a local woman who eventually ends up hiding him. It's all fairly tasteful and great care is taken to obscure Swann's rude bits.  Swann leaves the bike and approaches his clothes. A full skinny-dipping scene and not a single moment of nudity, surely thats your PG secured... right?

Just as you think you're out of the mine-field, however, they decide to throw in a full frontal shot of Fred as he dries himself. Now the shot is brief and from a distance so that the, how shall we say, “detail” is quite difficult make out.

I convinced myself I must have been mistaken and carried on with the film. By the time Swann arrives in town I was noticing a distinct lack of both production value and drama. Aside from the above blip this was playing out like a feature length episode of Knight Rider, or some other vehicle based American show from the 80's, and my interest was beginning to wane.

It is at this point the romantic subplot comes in, or so you might assume. While in town Claire takes him on a lovely tour showing him around her quaint home and as the cultural gulf twixt eras dissolve and their souls grow close Claire forces him to have sex with her at gunpoint.

I would like to suggest the title of this film is changed to The Humiliation of Lyle Swann. And that's not all, oh my no. You see later on Swann finds out that Claire is his Great Grandmother! I can imagine the BBFC breakdown: 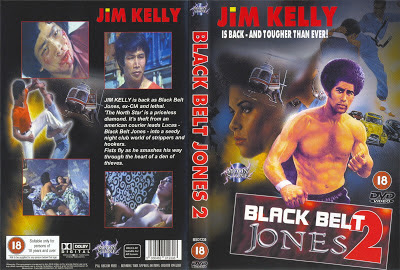 Black Belt Jones 2 isn't exactly the most surprising movie to feature such a scene but is here due to its utterly baffling execution.

This Jim Kelly vehicle has a distinct lack of decent fight scenes and, frankly, entertainment value in general. I'd made it half way and was considering turning it off when the scene in question occurred. A female character visits a gangland boss (who it is implied she had a previous relationship with) to convince him to let her current boyfriend off a debt (or something). The unpleasant fellow agrees but it is going to cost her dearly.

He stands her on a footrest and rips off her dress. We are then subjected to a sequence where we repeatedly cut between closeups of the woman's breasts and the mans bulging, ogling eyes. This little sequence well overstays its welcome and when it ends its something a relief.

Then the sexy saxophone music starts and you're immediately wishing for more shots of tits and eyes. As the horrendously sleazy and inappropriate music plays he manoeuvres her to the bed and proceeds to have sex with her. Well, he lays on top of her and kisses her shoulders, but we get the idea.

It is then that this inept and unpleasant scene becomes transcendental, bursting free of being a simple, unwanted bit of misogyny and taking flight into the world of the bewilderingly insane.

As the man ups his pace, we are suddenly treated to the intercutting of photographs of formula one racing cars and the sounds of their roaring engines and crowds cheering. I at first assumed this was a way of transitioning to a scene at a race track. Yet the following scene, and indeed the rest of the film, has nothing to do with racing.

I have shown this scene to a number of people well-versed in reading film and not one could find meaning in it. It remains something of an enigma and one that continues to challenge me. I have never recommended a film on the grounds of it having a scene such as this, but it is a truly baffling piece of cinema and the only reason I still own that film. You can pick it up in most pound shops and I believe it is up on youtube. But I must warn you, it contains frequent sweaty man, moderate boobage and is not recommended for anyone planning on having sex that week.