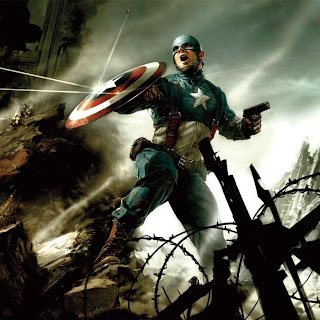 T'was while watching The Matrix: Reloaded, arms folded and wearing an expression not too dissimilar from the one I wear when waiting for a cold caller to get to the point, that I realised that had the film been japanese and released straight to DVD (or some similar scenario) I'd probably be telling everyone what a great find it was. It was a confirmation of something I already suspected but never fully acknowledged; that expectation can make or break a film. Possibly even regardless of the quality of the production itself.

I currently find myself insanely excited about the upcoming Captain America film. I've always been oddly fond of the gaudy crusader, finding him to be quite possibly the most perfectly conceived superhero in existence. Bright and colourful and representative of a set of ideals so clear and relatable (in spite of his very specific geographical allegiance) that you can't help but get behind the guy. It doesn't hurt that he is as close to a normal human as a super-powered individual can get. He's not a nigh-indestructible god, cannot conjure a giant green watering can should a fire need putting out nor can he read the minds of men. He can, however, smack nazis in the face with a big metal disc. Very hard. He is also a man out of time and one that can be used for the nostalgic celebration of a great victory through exciting wartime hi-jinks, or as a way to examine the modern American dream and how different it is from the idea he first put on those blue pyjamas to defend. From the seemingly excellent material released so far it looks to be the former. All the potentially corny elements seem to have been realised in the best possible way and, more importantly, it looks like it's got lasers in it. So colour me giddy.

Is this a bad thing? Am I setting myself up for a colossal fall? Or should I embrace this feeling? It's a pretty good one after all. And look at how much creativity is put into the marketing of these big studio films, more than is put into the films themselves in many cases. The drip feed of images, trailers, websites and interactive information trails begins the film experience before the credits even roll. The marketing becomes part of the consumption itself.

But does it therefore lessen the impact and/or value of the actual film? Are we possibly exchanging the joyful two-hour experience of a wonderful film for the prolonged foreplay of the marketing campaign just for the hope that some-day, some-where, a film will meet our expectations and allow us both experiences?

I suppose the real question is where does the film experience start for you, at the release of the first official photograph or as the first frame lights up the screen?
Labels: Articles