I've always had a fondness for movies where road trips turn into automotive conflicts. The kind of movies that owe their conception to Duel. The kind of movies that feature dust-bowl towns, dangerous locals and Police that might be in on the whole thing. The kind of movie where the driver gets tired or has to search for something in the glove box, only to find upon returning attention to the road a big-rig or bus heading straight towards him, and managing to save himself with a last minute swerve off-road. Y'know, those kinds of movies. Here are three belters. 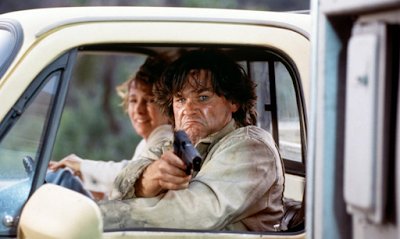 Breakdown is what you get when you mix a little Hitchcock into your cross-country car chase. Kurt Russell and Kathleen Quinlan accept help from a truck driver when they break down in the dessert. The driver offers to drop Quinlan off at the nearest truck-stop while Russel fixes the car but when he eventually gets to the meeting he discovers She never arrived.

Russell searches desperately in the vast and empty wasteland but finds only a conspiracy. Director Johnathan Mostow turns those screws putting Russell, who plays an everyman rather than an action hero, through his paces. Unlike a lot of movies such as this the tension never drops, it doesn't spill outside of it's own internal logic for cheap thrills and its climax is a small scale but thrilling car-on-car battle. 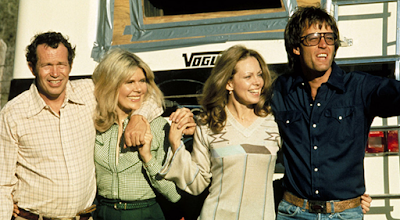 I'd seen this movie as a kid and mentally filed it as 'not scary enough to be a horror, not enough action to be a chase movie' but having seen it recently (for the first time since I was a child) I can firmly state that as a kid I was a prick, because this movie rocks.

Two couples take their motor-home across America to go skiing. They pull up to sleep one night and the two husbands (played by Warren Oates and Peter Fonda) witness some devil worshipping that ends in the sacrifice of a young girl. They report it to the local Police but find themselves hunted from state to state by Satanists.

It is a great concept and the movie pulls it off, but it is not without its problems. The movie has an issue with tension. Every time something unpleasant happens to them they just pull into a nice spot and try and get on with their holiday. Of course something ghastly and macabre occurs again and the cycle starts all over. Although the severity of the horrible event escalates the impact these events are having on our characters doesn't. They all seem to get over each event pretty quickly. It particularly hurts the ending which tries to convince us its an unexpected and shocking reveal but feels no less shocking than any other beat in the movie. As a result it just seems to end. 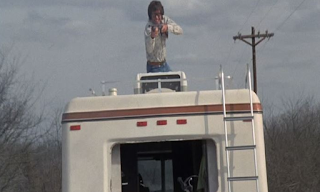 That being said there is a monster of a chase sequence that I had completely forgotten about and was not expecting. In the climactic moments the motor-home is besieged by trucks and cars in a high speed chase while devil worshippers leap from vehicle to vehicle trying to get inside. As Oates runs them off the road Fonda hangs outside blasting away with a shotgun. There are flips and rolls, explosions and one poor pagan getting slammed into a low bridge. It isn't quite The Road Warrior level, but it is a brilliantly staged and captured action sequence that comes very close. 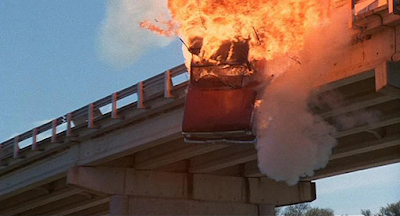 I think The Hitcher might be a perfect movie. That doesn't mean its the best movie ever, it just means that considering the kind of movie it is I can't think of anything it would need to improve it. The plot is simple: C.Thomas Howell is driving across the desert and picks up Rutger Hauer's hitch-hiker. He then immediately fucking regrets it.

This movie has everything you could want. Well measured and executed tension, high-octane vehicular action and moments of proper horror. The opening moments where the two converse and Hauer's intentions are slowly revealed is one my favourite movie openings ever and would work well as a horror short alone.

There are so many effective moments - the jail cell opening, the finger - so good. Hauer is phenomenal in this. Rather than play the villain as a Terminator style killing machine or parade well-worn 'psycho' ticks he gives the character charm, swagger and a sense of humour. The diner scene in particular is wonderfully played by both actors.

It too has a pretty destructive car chase. Not only do Police cars tumble down the highway but a chopper gets in on the action too.

The exact mix ingredients in these kinds of movies can vary, some leaning heavy on the supernatural (such as The Car) while others playing with 70's car chase movie vibes in addition to horror (like Death Proof). These three films, however, not only blend their elements in a very particular way but manage to keep them pure across three decades. Aside from some fashion tells these screenshots could all have been from the same movie. I am by no means saying these three are superior however they exists as examples of a carefully mixed cocktail of suspense, horror and balls-out stunt work.
Labels: Triple-Bills