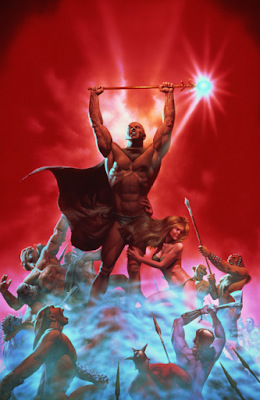 Cartoons have often been seen as entertainment for children yet historically there have always been animated movies made featuring content clearly unsuitable for kids. There are a huge range of "mature" cartoons, the three below being ones that have particularly stuck out for me.

A valiant attempt to imbue real, rather than suggested, motion into the paintings of fantasy master Frank Frazetta, Fire and Ice is a swords and sorcery epic masquerading as a Saturday morning cartoon. An evil sorcerer instigates a devious plot from his ice castle and attacks fire keep and its King. His daughter, Teegra, is kidnapped by the sorcerer's troglodytes  but escapes into the jungle. While the two leaders battler for supremacy Teegra meets up with Darkwolf and Larn and fight their way back to the bigger battle.
Bakshi employs rotoscoping, a method controversial amongst animators as it, for want of a less reductive explanation, 'traces' live action rather than crafting motion frame by frame in traditional ways. Although the method feels less hand-made, the combination of traditional illustration and realistic movements is exciting and makes it feel like you are watching a comic book brought to life.
The movie is violent, though not overly gory, and the recognisable aesthetic of simple figures against detailed, painted dioramas gives it the frisson of watching a violent He-Man cartoon. It also means the action is genuinely thrilling, in particular the utterly badass moment Darkwolf goes apeshit on a bunch of cavemen with his axe.
Like a lot of swords and sorcery movies this one features people wearing very little and although men and women alike reveal flesh Teegra is often positioned in overtly sexualised positions. While Larn and Darkwolf strike powerful poses and flex muscles, she drapes herself suggestively across rocks and logs. She is not without agency, however, and is as resourceful and dangerous as the male characters (if not more so at times) but there are moments where it feels like the animators are getting a bit carried away with curves they have drawn.
Animation techniques aside this is a thrilling fantasy adventure, Teegra and Darkwolf are legitimately iconic creations and this movie is always a go-to when I'm in the mood for some fighting fantasy fun. 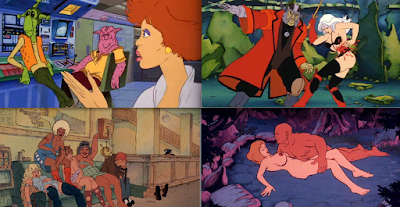 The French fantasy comic Metal Hurlant was an anthology, much like 2000ad, made for mature audiences. It travelled to the US and was renamed Heavy Metal and became famous for its cover art depicting scantily clad science fiction women. The animated movie works in much the same way as the comic; an anthology of science fiction stories most of which (I believe) are direct adaptations of comic stories, the connective narrative tissue being an ominous glowing ball of evil that travels through time and space, leading us to the different stories.
The artwork and animation is varied and by no means slick, but the images and ideas on display are varied and exciting. Although 'mature' for its content, it is pretty juvenile at times, its main attraction being animated nudity.
If fantasy and science fiction are your kind of thing, though, you should find a couple of stories in there that arouse your interest, the talent involved is astonishing (Bernie Wrightson, Richard Corben, Dan O'Bannon, Harold Ramis, John Candy) and Elmer Bernstein's score is an all-timer.

This animated space opera sees an enslaved minor discover an invisible sword and take off to the stars to free his people. This is, by no means, an "adult" cartoon and is at times indistinguishable from most Saturday morning adventure cartoons of the 80s. Although the animation is often better what mostly marks this apart is the movie's habit of wandering more gruesome paths that its television cousins. Remember, in your average TV cartoon (He-Man, Centurians, M.A.S.K., Bravestarr, etc) you would never see anyone die. In Starchaser not only do we see characters die but there is some relish in rendering their demises. Lasers do not just strike bodies but propel non-specific debris into the air and a member of an awesomely designed race of mutant cyborgs falls on the sword, his greenish inner-goo seeping down the invisible shaft. A visit to a sleazy bar later in the film shows us some heavily clevaged space prostitutes - something unlikely to be found in your average episode of Transformers.
In all honesty Starchaser is probably something that will only work if you have a certain amount of nostalgia for it but does represent a curious bridge between the safe Saturday morning cartoons and the slightly more risque animations above.
Labels: Triple-Bills