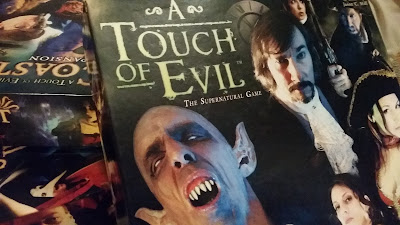 There is a monster on the loose in colonial America and you must form a hunting party, arm them and track the creature to lair to kill it in this richly detailed game of resource management and investigation. 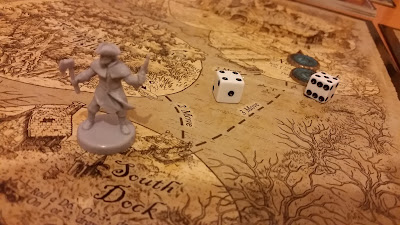 Each player chooses a character and a villain card is selected along with a pile of its minions. You play across a gorgeously realised map of the town of Shadowbrook and spend your turns moving to various places on the board to investigate. Each location allows you either draw a card (providing useful equipment or devilish setbacks) or roll to see if fortune swings your way. Move into a space with a minion and you must roll dice against it to see who leaves the space the victor. As you move around you collect investigation points that can be used to heal, buy equipment or investigate the town elders above the game board. Each Town Elder, you see, has a secret card underneath them that will reveal them to be either an ally or secretly in league with the monster. 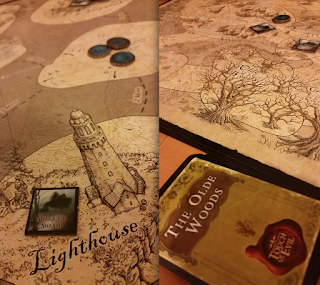 After the heroes have all had their turn a mystery card is drawn, revealing exactly how the monster and its minions attack you and the town. Once you have collected enough equipment and feel ready to take on the monster you travel to its lair (by purchasing a lair card) and form your hunting party of Town Elders. Better hope you've investigated well because you if you pick one with an evil secret they immediately join the monster and make your battle even harder. 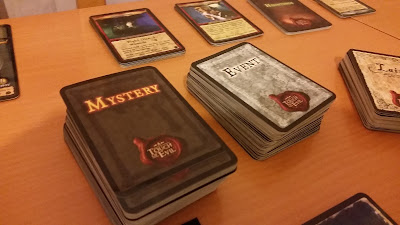 The showdown between heroes and villain is a matter of dice rolling, using the various cards collected along the way to modify the results one way or another. If the villain receives too many wounds it is dead and the heroes are victorious, if the hero gains too many wounds then the villain escapes and the hunt begins again.

The management of resources allows you to customise your character ready for battle and the combination of weapons, armours, allies and special abilities are seemingly endless. The investigation of Town Elders mechanic is fun and fits in with the genre though it doesn't take long to work out who you need. 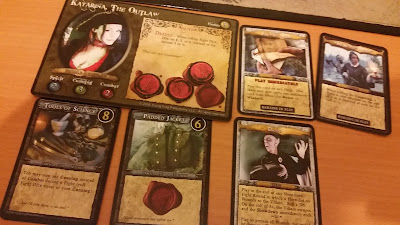 The real above the table element is in the various modes of play available. Cooperative play is good if you want to share resources. The villain is more difficult to defeat and everything costs more but you are a stronger team as a result. Those with really strong friendships might like to try the competitive game whereby the first to beat the monster wins. This not only adds a race against time but also provides ample opportunity for you to screw over other players. In this version, for example, a rival player can accuse a Town Elder of being in league with the monster as you are forming a hunting party and if correct they join the villain against you. 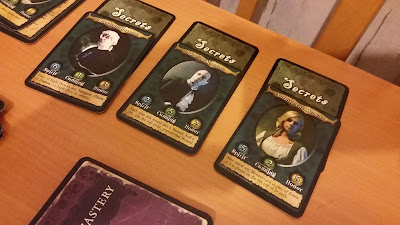 The team game is a mix of both as small groups of hunters team up against others to do battle. The rules contain all the adjustments to make this playing modes viable and alongside a range of other features such as event cards, a tracker that makes the villain more powerful but easier to locate, and different villains with unique abilities the game features huge variety both on and above the table. 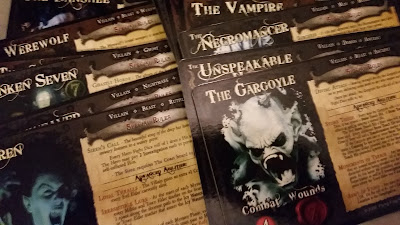 Flying Frog Games know how to produce a good game. The cards are firm, though their coating is a little sticky making the decks tricky to shuffle. The Artwork is mostly photographic but considerable production value has been put into the pictures. The villains in particular look great. The figures are wonderfully sculpted and the board is a thing of beauty. There are hundreds of sturdy tokens to sort through and they've even provided a CD of mood music to play alongside the game. 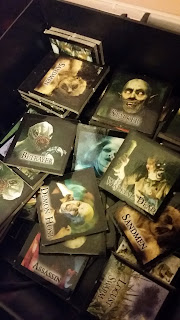 Once play starts it isn't to difficult to get your head around, though trying to manage all the cards that have built up (even with carrying limits), what events are still in play and how that modifies your character's statistics can be tough. The running time of the game depends on how many people are playing. Since the fundamental mechanic is collecting bits and pieces as the game goes on it can get a little repetitive and, at times, frustrating when all of your patience doesn't pay off or an unlucky couple of rolls against a minion throws you back to the centre of town having lost some of your best kit. For experienced players this length of game is fine but newcomers who might not appreciate the craft, atmosphere and world building of the game could lose interest. 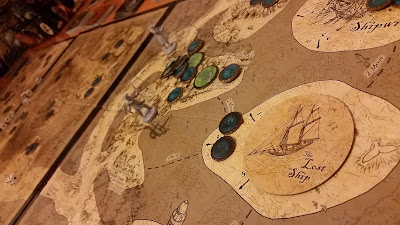 There are three main expansions to the game (plus a couple of extra hero packs) that not only add more villains, cards and mechanics but whole new boards that fit on the end of each other. The photos in this review are from the game played with all expansions in the mix. It's pretty epic and took two of us a couple of hours to play, but was an exciting and immersive experience. 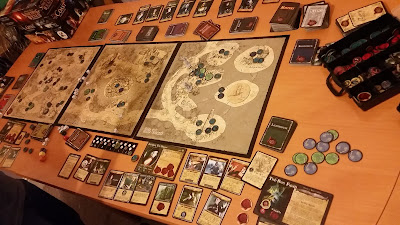 This isn't the most accessible or fast-paced game and I'd recommend clearing an afternoon (and a massive table space) to play it but the quality, attention to detail, atmosphere created and the variety of game mechanics makes this a wonderful little niche game I love playing. 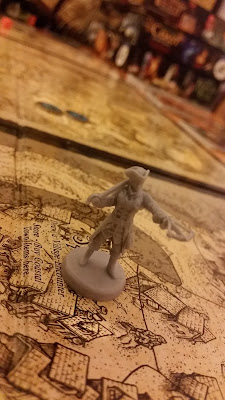