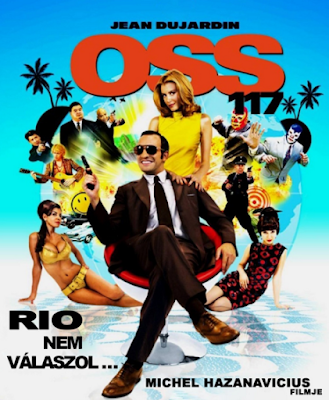 Of the all the things to get lost in translation comedy is possibly the most common. A change of language can alter rhythm and delivery while obscure cultural references can render moments devoid of context. As such, taking a punt on a full-on French comedy is a little less sure-fire than that of another genre. Thankfully, this is not something I'll worry about in the future as OSS 117: Lost in Rio is an all-timer.

The sequel to the 2006 Cairo, Nest of Spies, Lost in Rio is a sixties spy spoof that sees Jean Dujardin's OSS 117 track down stolen microfilms from a Nazi agent. OSS 117 is not unlike Ron Burgandy; a brash, vein and borderline racist alpha male at odds with a changing world. This, alongside the sixties spy setting might start to conjure Austin Powers-like imagery but unlike its English speaking peers this movie is a little more measured.

Rather than throw up a load of sixties spy tropes because they are antiquated or nostalgic, Lost in Rio works very hard to create an authentic sixties spy film. The fashions, cinematography, film stock and music are not used as the subject of amusement but are instead used to create humour. There are a couple gags constructed and delivered via use of split screen, for instance, showing us there are smarts behinds the decision to use this technique rather than asking us to laugh at the technique itself. 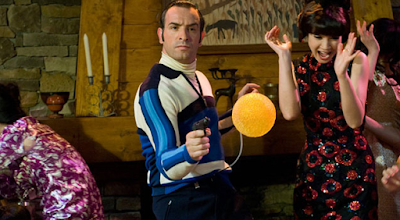 Even the style of humour isn't too dissimilar from the wry self awareness of the '66 Batman or Flint movies. What it is able to do is bolster that wryness with some ever-so-slightly racier sex references while using hindsight to throw a more contemporary perspective on race, gender and social trends. A good example of this is the scene where OSS 117, every bit the conservative Connery-esque spy, sits around a campfire trying to convince a hippy commune they've got it all wrong before suddenly tripping balls on LSD and finding himself deep in the midst of an orgy. None of this is particularly anachronistic, yet it merely allows the inclusion of a social dialogue already present in that era in a film that would have never gone to those places. 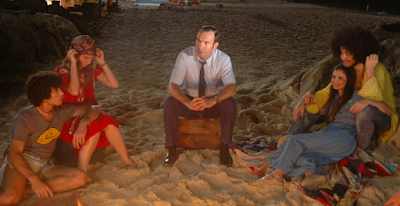 If you're not already aware Dujardin is nothing short of brilliant. Not only does he fit the sixties super-spy model perfectly he is willing and able to expose and draw humour from the character's problematic ideologies. Able to play over the top in downbeat moments (such as trying to convince a gathering of Nazi's to love their fellow man while dressed as Robin Hood) and deadpan in silly moments (like trying to gut and cook a giant crocodile to prove a point). Dujardin can switch from genuinely cool to absurd, charming to charmless and sometimes even do them both at the same time. 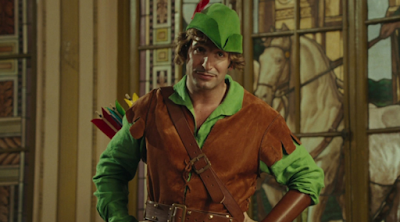 And this is how I feel about the film itself. It is a movie that has its cake and eats it over and over. It works as both an earnest post-war spy adventure and post-modern comedy. The movie's finale, a standoff on the arms of the Christ the Redeemer statue, is expensive and spectacular while remaining delightfully silly. So perfectly judged was this film it had me in the palm of its hand. So much so a throwaway gag where OSS 117 takes a poorly composed selfie got the biggest laugh out of me despite being a joke I'm sure most people won't even register.

This is a movie that hasn't become culturally relevant simply because it was made in a non-English speaking country. So let me assure you it is safe to put all those doubts aside. This is a movie that will compete with, and in many cases best, most mainstream US and UK comedy movies. Lost in Rio has shot up on my list of favourite comedies and its predecessor, Cairo, Nest of Spies, has shot to my list of must see movies. It's a delight, check it out now!