I have, in my head, a narrative regarding Patrick Stewart's casting as Jean-Luc Picard in Star Trek: The Next Generation. This narrative has been constructed from documented interviews and anecdotes from cast with any gaps filled in by my own unconscious assumptions. It is thus:

Classically trained Shakespearian actor Patrick Stewart makes something of a departure from his usual work to appear in a genre TV series that straddles both mainstream cultural awareness and cult fandom.  Initially, there is friction on set but soon Stewart settles into the fun side of the genre and soon finds that this role, alongside Professor X, arguably defines his career.

Ultimately, I've filed TNG as an odd choice for Stewart and a coup for the Producers, yet a recent viewing experience made me re-evaluate this. Over the last week I've re-watched three films, selected generally on a whim, only to realise that not only did they represent three of the key genres generally associated with 'genre film-making', they were all slightly unusual or oddball approaches to those genres and were made within five years of each other. Oh, and they all had Patrick Stewart in them. I'd seen these movies before and I knew that Patrick Stewart appeared in supporting roles but it wasn't until I watched them one after each other (and in their order of release, quite by accident) that my brain connected all these dots. So this co-incidental coalition of seemingly disparate but weirdly connected elements has lead to me realise Stewart came to Star Trek an experienced sci-fi and fantasy actor. 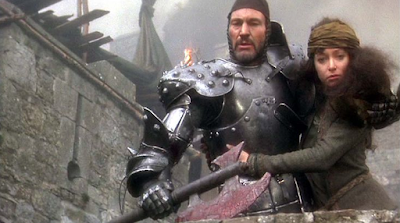 Although it has taken me several viewings to truly appreciate it, Excalibur has become one of my most beloved fantasy movies. The movie charts King Arthur's life from conception to death and as a result is required to juggle a great deal of elements, elements that would normally conflict with each other. This film is neither a fantasy adventure nor a historically accurate legitimisation of the myth but rather a balancing of both. Boorman skillfully walks a tightrope throughout, deftly mixing mythology with realism, comedy with tragedy and traditionalism with realism.

This is not a movie that is a flight of fancy, yet never ignores the magic surrounding these stories. For all the mud, grit and blood there is sorcery and romance. The way magic is handled in of itself reveals the layers Boorman is working with. Merlin, a complex character in this version, speaks of a great dragon whose breath and fire can be summoned by those who know how. Merlin's explanations are vague enough to retain a sense of mystery but he speaks with such authority and clarity that magic never seems illogical. His talk of the coming of the time of men, and how he has other worlds that need him, not only hints at a bigger world being built but of the conflict twixt Paganism and Christianity.

To the say the film is visually arresting is an understatement. It has the palette of colours and textures one would expect from an 80s fantasy flick yet weaves in enough tactile earthiness that it always feels grounded. To a modern audience "grounded' tends to mean stripping away fantastical elements to make an imaginative character make sense in our world but here Boorman grounds magic so that it makes sense in the movie's world. This grounding helps depict a history that could have existed, rather than showing a lack of confidence in the whimsy of magic. In terms of audience reception though this can leave some people feeling unsatisfied. Those looking for manly men doing heroic deeds may get lost in the languid pace and the films weirdness while those looking for something more real might be put off by the fantastical elements... and also the weirdness.

Excalibur is violent without being grotesque, confrontational without being antagonistic, stylistic but never silly. It is ugly in its beauty and vice versa. It is a perfectly measured cocktail of mythology, skillfully mixed and perfectly poured. 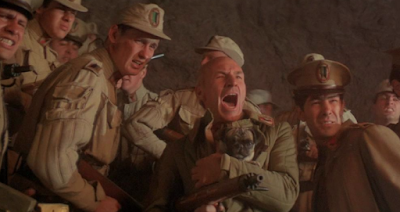 I come to Dune having never read the books, seen any other adaptations nor played any games. My entire knowledge of the Dune mythos begins and ends with the opening and closing credits of the cinematic release of Lynch's only space opera. And I love it.

Without prior knowledge even I can see something has been lost in the adaptation process but this actually helps me enjoy the movie more. Rather than create a comprehensive exploration of the political conflict over Arrakis Lynch has created a snapshot of a bizarre alien war, packaged and sent through time and space to be viewed by we mere primitives. It has not been made to make sense, but to highlight how unfamiliar and, well, odd this vast world is. As such I watch this not to be swept into a fantastical adventure but like a nature documentary. I observe these events, fascinated by their otherness, from a distance.

Of course this could result in something dispassionate and boring, by Lynch provides such a visual feast, through which is weaved broad but identifiable emotional beats, that every frame is accessible even if you haven't quite got down every name, relationship or motivation. Lynch traditionally works with very real concepts and situations made alien, here he takes an alien world and lays it out for us to understand. It is arguably one of the least "Lynchian" films he has made.

Of course the fact this movie features action sequences also makes it feel less like classic Lynch. More surprising is how great the action is. No sequence is ever going to end up on a best fight scenes of all time list, but whether it is a one-on-one knife battle or a full scale desert war it is captured with clarity and rhythm.

Lifeforce is, by all standards, a terrible terrible mess. At times it feels like someone noted down every suggestion spitballed in a pitching session and then made that film without cutting anything out. Stuff just happens, stuff that probably shouldn't happen in the same movie.

A space shuttle finds an alien craft hidden behind Halley's comet and investigates finding a nest of long dead space bats and some crystal coffins with sleeping nudey people within them. They bring them back for study and one of them breaks out and wanders the military base sucking the life-force out of everyone it meets, reducing them to skeletal husks.

Of the three naked people brought back for study two are male and one is female. Can you guess which one breaks out and wanders the base in their birthday suit? If you said the males you clearly have never watched a movie ever. No, they are dispatched quickly without even a glimpse of space peen. The woman, on the other hand, well...

I'm not the kind of person to spend that many words writing about hot naked women however when the movie you are summarising commits so much screen time it is kind of unavoidable. The lead space vampire, played by Mathilda May, awakens from her slumber to go on a naked midnight energy feast. She patrols the corridors, often in full or mid shots and with stark lighting, leaving nothing to the imagination. I don't think it is crass or reductive of me to suggest that May was hired primarily because of her physical attributes. She is, by all accounts, an objectively beautiful woman, not unlike a sculpture of a Greek goddess. I recoil in horror at the mere thought of what the audition might have consisted of.

And yet, no matter how much she is placed on screen for male consumption, and considering her function in the narrative is to seduce before killing, she actually comes across as weirdly sexless. She is introduced to us naked and as such nudity is her status quo rather than a transgressed taboo. She is a very toned woman resulting in very little movement in her body whether she is rising from a table, descending stairs or indulging in pre-feeding foreplay. This lack of motion, along with her pale complexion, actually makes her look like she made from porcelain, or again a sculpture. She just never appears real. If naked women killing people is your thing then you might be inclined to think this is the whole basis of the movie, a sexy Thing (I believe that was what Errol Brown was singing about) if you will, but everything mentioned so far is only in the first half hour.

The film quickly gets into a group of angry men hot on the trail of the escaped space siren, temporarily visiting an insane asylum for some screaming and uncomfortable sex stuff. This is by far the least interesting portion of the movie and you would again be forgiven for assuming the story would settle into an urbanised science fiction such as The Hidden or The Terminator. But just as things get dull the movie shifts gear yet again.

The alien craft found at the start of the movie comes into the Earth's atmosphere and brings with it a vision of hell on Earth. There is fire, collapsing buildings, zombies, space bats and all manner of weird shit. It is like a Heavy Metal album cover come to life. It is difficult to watch this sequence and not feel satisfied. So, in short, Lifeforce is a space horror base under-siege apocalyptic psychosexual thriller with a bizarrely upbeat adventure score. It's nuts, and all the better for it.

Stewart only appears for a limited time in each and so to suggest that he provides something connective between these three movies would be absurd, but for him to have appeared in a fantasy, sci-fi and a horror movie all within a five years of each other and all of them notable for being atypical examples of these genres does suggest that he was by no means slumming it by taking on the role of Picard. If anything being cast in Star Trek now seems the safer choice: like slipping on a pair of comfy lounge pants and crashing on the sofa after a particularly weird stag weekend.