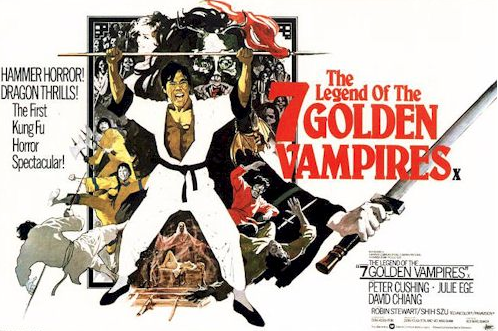 I always forget how awesome The Legend of the 7 Golden Vampires is. I remember its good, otherwise I wouldn’t put it on, but I'm always taken by surprise by how good it is. And I shouldn’t be, at all. I love Hammer horror movies. The gothic Hammers, the Universal Horror movies and a number of eighties horrors pretty much make up the images of horror my mind defaults to. I love enigmatic and slightly troubled monsters, adore mist rolling through woods and go giddy over wonky silhouetted castles perched on Eastern European mountains.

I also happen to love martial arts. Now I’m not quite a die-hard old-school Kung-Fu fan, though I do appreciate the artistry on show in these movies and, more than that, how old-school martial artists can really fuck people’s shit up.  These wispy bearded motherfuckers don’t just chop and kick, they blind and behead with their bare hands! So this movie, the product of a collaboration between Hammer Studios and the Shaw Brothers, should be an obvious home run for me.

So let’s start with what doesn’t work so well. It opens with an old Chinese monk scrambling up a Carpathian hill to have a chat with Dracula. Unfortunately they couldn’t get Christopher Lee this time round. John Forbes-Robertson doesn’t make for a terrible Prince of Darkness, and his voice is suitably rich, but the make-up job is just awful. It looks like he’s had ten minutes sat at the face-painting table at a child’s fete. The harsh light that bathes over him in his first appearance doesn’t help either exposing a fairly brash red lipstick. Luckily he possesses the monk pretty quickly and doesn’t return until the films climax where the lighting is a little kinder.

Aside from the dodgy make-up everything else is pretty awesome. Peter Cushing reprises his role of Van Helsing who is visiting China to investigate the origins of vampirism. Approached by a group of kick-ass marital arts brothers, who want to escort him to a village overrun by seven of the buggers, Van Helsing, his son, and an adventure-seeking lady trek through the deserts to confront and destroy these pesky golden vampires.

The film uses the strengths of each studio to the fullest, adding the heaps of atmosphere and sexuality  Hammer Studios does so well to the intricate choreography and lush locations of the Shaw Brothers. The mix of deadly Kung-Fu and horror is thrilling, with dismembered limbs, gouged throats and gaping axe-wounds (grow up, seriously) making all of the fights satisfyingly gruesome.
The Kung-Fu posse is fun, each member having a different speciality. One rocks two massive axes, another a bow while two brothers hold hands and fight as one, which looks better than it sounds.

The Vampires are no slouches either. They are crusty-faced bad-boys with long pointy fangs. They don’t leap with arms out-stretched like your traditional Jiangshi, but look the spit. They also come armed with a ready to battle army of skull-faced undead who pull themselves from misty graves to descend on the living in search of nubile young sacrifices. It’s in this area the film does get a little carried away, with there being a bit too much female shirt ripping than I can imagine was narratively required. Vanessa, our spunky heroine (last warning), also spends the latter half of the movie running round in an almost see-through top undermining what could have been a progressive role.

And the film does have some surprisingly progressive elements. Despite being all heaving-bosom and nipples on show Vanessa is a no-nonsense, tough adventurer, financing her own trip around the world is search of thrills. She has a few scream and trip moments but it’s her money and determination that allows the expedition to happen in the first place. The film is a little forward thinking in its approach to mixed race romances as well. Initially setting up Van Helsing Jr. and Vanessa as love interests they actually pair off with members of the Kung-Fu posse. These romances are never treated as unusual and in fact both relationships seem to be rather lovely.

"Rather lovely" is not how to describe the end battle sequence, however. An epic martial arts battle between the Kung-Fu brothers and the army of the dead set against a flaming pit and rows of lethal spikes, it is a no-holds barred conflict where no character is safe. Swords, extremities and blood fly through the air in a glorious set piece that is one of my all-time favourite finales. Its like a Kung-Fu Wild Bunch. When Van Helsing finally faces off against Dracula, however, it is a little short and disappointing by comparison. Considering some of the lame ways Dracula has been taken down in the past (I’m looking at you Taste the Blood of Dracula) it’s nothing to let bother you too much.

The Legend of the 7 Golden Vampires is an all-time favourite of mine, a gorgeous, violent, exciting martial-arts monster mash and in my opinion one of the best action horrors ever made.

P.S. The trailer is full of MAJOR spoilers, so if you're considering watching the film avoid checking the trailer out first.
Labels: Reviews