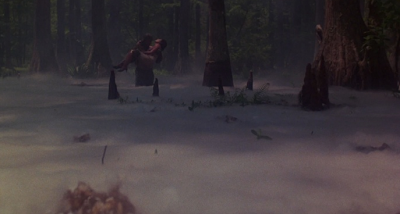 If you go down to the swamps today you're sure of a big surprise. Actually that's not true because outside of The Muppet Movie the only thing that is likely to result from a visit to the swamp is to be eaten by a part-vegetable muck monster. So confident was I that this was the case that I started to delve into my collection to pick three fine examples of the well-worn sub-genre of swampy plant creatures. I soon realised, however, that this was far from the case. With exception of the Thing From Another World (Christian Nyby, Howard Hawks, 1951) most plant monsters are of the giant variety (Audrey, Triffids, Biollante) while most swamp lurkers are in-bred simpletons and the occasional killer croc. With such slim pickings I had to complete my list with a fairly unimaginative choice. Still, all three are fun in their own way. So put on your waders, grab a flashlight and look out for leech men as we go deep into the fetid swamps searching for... things! 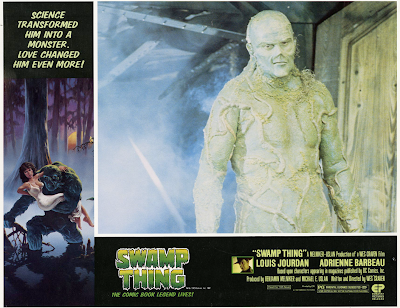 Based on the DC comic character Wes Craven's Swamp Thing is a mostly successful adaptation. Smiley Doctor Alec Holland (Ray Wise) is chucked into a swamp by rival scientist Arcane (Louis Jordan) along with a vial of volatile and glowing secret formula that turns him into the ghastly yet gallant Swamp Thing (Dick Durock). Arcane, spurting lines with an outrageous accent and a mouthful of scenery, needs to hunt down the last of Holland's notebooks which is the hands of Cable (the awesome Adrienne Barbeau). What follows is a battle of wits as Arcane tries to capture both the book and Swamp Thing, while Swamp Thing tries to protect Cable and while Cable tries to avoid everyone.

Now I say battle of wits because that's what Arcane keeps telling us is going. He even goes to far as to describe Swamp Thing as a great chess opponent. In reality the battle is entirely witless. Arcane's comedy thugs capture Cable, Cable kicks them in the balls and runs away. Thugs chase Cable. Swamp Thing rescues Cable. Arcane thumbs his fist in defeat. Cable runs away and sighs with relief. Arcane's thugs turn up to capture her almost immediately and the cycle begins again. Throw in a smashed up jeep, a couple of fanboat/jetski stunts and a gunfight here and there and you've got the first hour and change of this movie. Plus, for a movie that is shot in a swamp it is also curiously un-atmospheric. It's not bad, but it's like eating a meal with a cold. You know it should taste nice but it's just a little bit flavourless. 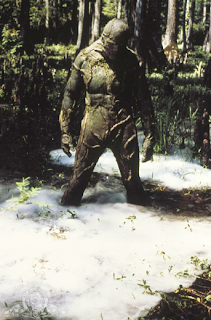 That's not to say it's not any fun. Swamp Thing is a big guy in a rubber suit which, although not great, works pretty well for the movie. Actually, screw it, if you can overlook some weird creases and the dodgy mouth piece he's a pretty cool monster. The stunts are nicely staged and Jordan makes a fun villain. Plus you have the awesome Adrienne Barbeau (did I remember to tell you she is awesome?). Once again playing a role that could be the usual eye-candy/damsel in distress she actually kicks considerable arse and even with her extremely unnecessary topless bathing scene still manages to come out of this with dignity. In fact she pretty much holds the movie together.

It's in the third act though where the film comes alive. Fully embracing the classic horror tropes Craven throws in secret dungeons, mad experiments, a monster in chains, a white gown for the leading lady and lashings of mist. Plus, Swamp Thing gets to fight a monster. It's a pretty goofy werewolf-come-armadillo with googly eyes and a broadsword, but it's a monster none-the-less. 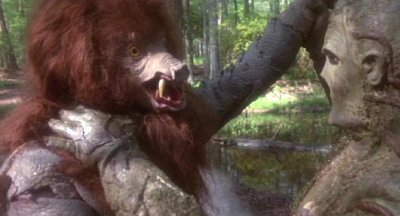 As great a way to end the movie as it is you can't help but leave wishing the whole movie was this much fun. Still, Swamp Thing remains a slightly edgier comic adaptation. It's like an episode of The Incredible Hulk TV series but with blood and occasional nudity. 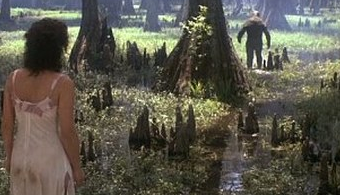 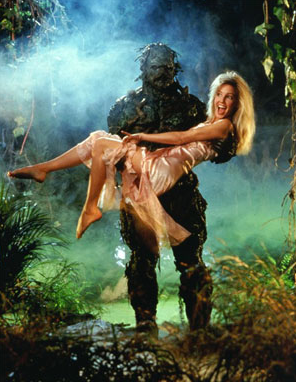 Swamp Thing is back, as is Louis Jordan and Dick Durock, and this time they are bringing Sarah Douglas and Heather Locklear with them. This is a real departure in tone from the first movie as it really ups the goofiness of the whole thing. Opening with comic book panels and Creedence Clearwater Revivals Born on the Bayou you can immediately tell they are not trying to build any kind of atmosphere. Throw in some obnoxious kids and even more comedy thugs and you've got what amounts to a Troma movie made for children.

Please, please, please do not going into this expecting, well... anything. Anything except a better monster suite for Swamp Thing and a greater quota of cool monsters for him to wrestle with.


There is also a weird moment where Swamp Thing gives Arcane's daughter (played by Locklear) a bud picked from his body (eww) that allows her to hallucinate that he is fact a handsome blonde hunk so that he can have sex with her (EEEEWWWWWW). I would have killed to have it cut out of the hallucination so that we could see her grinding against a massive heap of heavy-breathing pond scum. Alas we have to make do with the far less sexy... I mean funny... sight of Locklear and hunky Durock.

The Return of the Swamp Thing can be a fun monster mash if watched in the right mood. Me? I'm always in the mood for sexy pond s... I mean monster mashes (dammit). 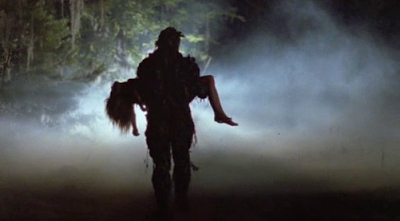 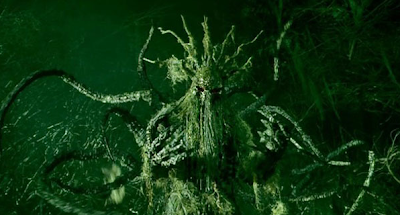 This is probably the most genuinely effective of the three. Loosely based on Marvel's Man-Thing character, this tells of a cynical oil tycoon drilling sacred swamp land and re-awakening the vengeful guardian of the swamp. There are murder subplots, in-bred thugs, black magic, sex and death.

The film plays like a genuine horror rather than a superhero story, with Man-Thing being kept largely in the shadows until the third act. Considering the film suffered a number of budget cuts during production the film looks surprisingly expensive, with some great sets and heapings of atmosphere. The monster itself is pretty awesome too. It is a huge hulking practical suite with a few, surprisingly effective, CGI extensions. 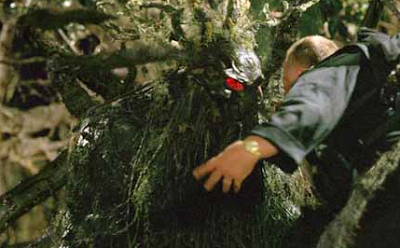 In fact the only thing that prevents this from being something special is the cast. Don't get me wrong they are all fine, but none of them really stand out. All this film needs is a shot of charisma and it could be well above the usual straight to DVD fodder.

These three films should sate all your swamp creature needs ranging from goofy to fun to atmospheric, at least until someone comes along and makes a proper Swamp Thing movie. 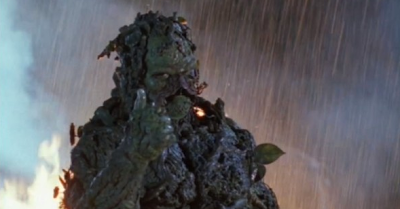