The Monolith Monsters is a 50s science fiction film that, probably due to the volume of these kinds of movies that were produced in America during the time, is not quite as well known as it should be. I say that because it has a premise that is very different from other films of this era.

A meteorite crashes into a remote but developing American town and shatters, leaving chunks of smooth black rock scattered about the desert. Over time a number of passers-by, including some kids on a field trip, collect some of these fragments as souvenirs. Unfortunately for them, and the human race in general, these rocks are pretty aggressive. Yep, aggressive rocks. 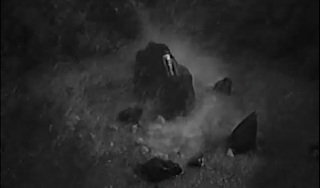 When they come into contact with water they grow to the size of tall buildings and then, on collapsing and shattering once more, spread. A burst of rainfall in the second act pretty much ensures these things are going to spread fast. Not only does this cause a lot of property damage (so many wooden huts get wiped-out in this film) but when humans make contact with the rocks their bodies seize up, almost becoming rocks themselves. With these monoliths making their way into town it is up to the townsfolk to halt their advance. 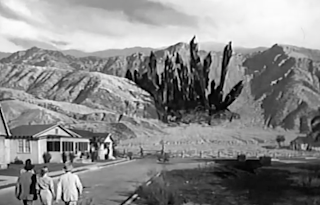 The Monolith Monsters is by no means an amazing film, its main weakness being none of the human characters are remotely interesting, charismatic or as a result memorable. Yet the premise alone makes this an interesting curiosity. While the science fiction cinema of the 50s is normally concerned with martians and saucers and whatever anti-communist metaphors can be read into them, this feels like a precursor to the disaster movies of the 70s. What particularly struck me was that there are no antagonists. The rocks are, well, just rocks, when the diseased people are transformed into monsters they just seize up and fall over, rather than becoming aggressive themselves, and there isn't even the usual selfish, cowardly survivalist character who is willing to step on or sacrifice others to survive. Nope, it's just a group of people working together in a race against time... against rocks. 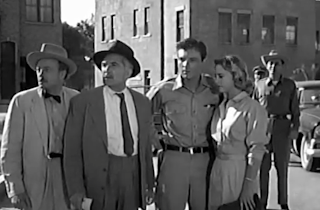 Crazily the film-makers pull it off. Despite the threat being from inanimate chunks of debris there is a real sense of foreboding coupled with an urgency and energy. The final act, where the characters have blown a damn unleashing a tidal wave of salt water (the only thing that can halt the spread of the monoliths) that races to clash and head-off the approaching rocks is actually really exciting. Sure, it could do with some characters in a car caught between the waves and the rocks, but despite some great model work this film is really on a budget. No, that addition is for the remake.

This already feels like it could be Roland Emmerich's “small, personal” movie and with a little pep added to the characters and a couple more gags worked out with monoliths it could make for a really strong b-movie. As it is it stands a not entirely successful curiosity. A great concept, some exciting moments and nice models marred by the fact that everything that isn't those things is pretty flat. But at 77 minutes it's not going to suck too big a hole in your life, so go check it out. 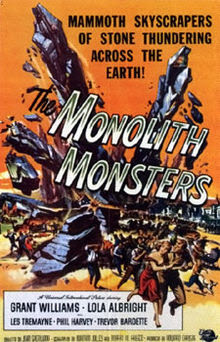