Iron warrior is the third in the Ator series of films. Ator is a skilled warrior played by model turned almost an actor Miles O'Keefe who roams a harsh fantasy land looking for exciting adventures to get involved in. Based on the strength of this film, he doesn't often find them. 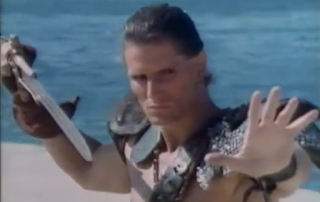 I first saw Iron Warrior at a time when I was starting to explore films rated higher than my age. These were films that might have had more swearing, blood and naked people then I'd have been used to. Iron Warrior has small amount of two of those (not swearing) and as such made something of an impression on me. Re-experiencing films based entirely on nostalgia can be dangerous. Surprisingly, the film was exactly as I remember it.

To recount the plot would be futile as I doubt even the screenwriter could. A witch steals one of twins and as a result is punished by a group of peace loving sorceresses to eighteen years of imprisonment. This trial appears to take place in the same hula-hoop themed courtroom Zod, Non and Ursa are put on trial in Superman 2 (Richard Lester, 1980). One of the twins grows up to be Ator, the other an evil and deadly warrior known as Trogar. We know he's deadly because, as you can see in the trailer, he can slice a giant loaf of bread in half with one blow of his sword. Once released, the witch decides she is going to bugger about with a princess for some reason or another. Quite what the motivation of the antagonists are is beyond me as every time they capture the princess they decide to let her go. The dialogue doesn't help explain things as it seems to be written by an eight-year-old. We are treated to lines such as :

“The island beneath the waves, the island of the temple, there is hidden the golden chest of ages” 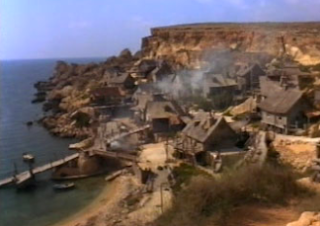 In spite of this the film has some merits. Low budget this film may be, but the choice of locations offers the kind of production value that can't be bought. Rather than the usual guy in furry pants running round a wood this genre normally treats us too, we instead get ruined temples, mountains, caves, dungeons and an impressive river-side village. I'm not sure where this movie was shot but I wouldn't be surprised if the village was the set made for Popeye (Robert Altman, 1980). Regardless, the film actually manages to sell a convincing fantasy landscape.

There are some nice set pieces too. A boulder chase, a weird horse-drawn bondage sequence, some rope bridge peril and a hilarious spear-throwing sequence which manages to transcend melee combat and become some kind of circus performance. 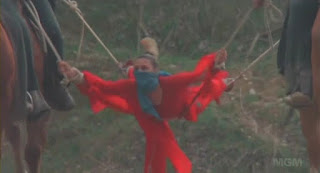 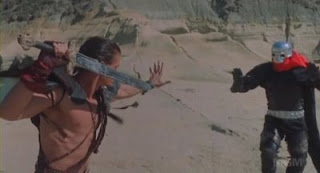 Director Brescia also pushes for some degree of artistry. The film is always atmospheric and at times reminds me of the visuals from Monty Python and the Holy Grail (Terry Jones and Terry Gilliam, 1975) although the witch does actually call our heroes “silly people” at one point, so it may have just been that. In addition, a liberal deployment of slow motion is used to create a dream like quality throughout. Unfortunately this is also the films real downfall. There is absolutely no pace to this bastard. Nearly all the fight scenes are slowed down or sped up, presumably to cover up the fact that no-one can actually fight. Any sense of peril is also completely destroyed, not only because the bad guys keep letting the good guys go, but because on more than one occasion an odd editing choice gets them out of trouble. A prime example being our heroes fall from a rope bridge. As they drop into the chasm below a close up of someones eyes is layered over the top of their descent. The heroes then wake up inside a cave, shrugging off this escape as if to say “it was probably magic or something”. It's nice to see a director using unconventional editing techniques but escape by montage is not as satisfying as you might imagine. It also doesn't help that there only seems to be one piece of action music, and it kinda sounds like the intro to Pinball Wizard 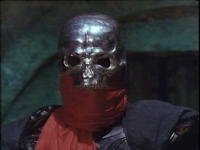 The real star of the show, and the image that stayed with me since I first saw this, is Trogar. His silver skull helmet and black garb make for an iconic look while his large frame, rasping breath and command of magic are reminiscent of Darth Vader. Like Vader, Trogar manages to exert a real presence in his scene. He goes out like a complete pussy though.

If I'm being honest I'm not sure whether I can recommend this or not. Had I not been looking forward to re-watching scenes from my childhood I can't say for sure whether I would have stuck with the film. All I can really offer you is what I have written above and that it is not by any means the least enjoyable sword and sorcery film I've seen. 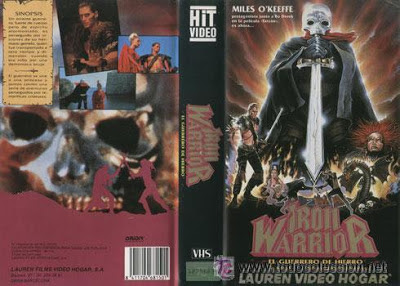