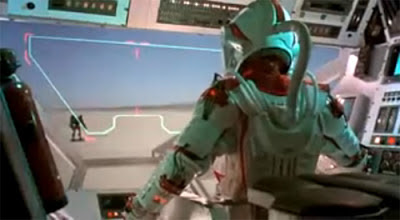 In the far future war has been recognised as expensive and morally bankrupt, so all global conflict is settled in the most economical and ethical way possible: The televised sport of giant robots smashing the crap out of each other while an audience (of what looks like homeless people) cheer!

Welcome to the future that Robot Jox paints, a wonderful straight to VHS science fiction actioner. It's a film that, on the surface, looks kind of cheap and silly but when comparing it to what sat alongside it on the shelves of Laser Video (one of my many local video shops growing up) it was clear that Robot Jox was hell-bent on going that extra mile. The film gets so much right that it's hard to dismiss.

Firstly, the casting is better than normal. The robot pilot (or Jock) of the fictional western country (basically America) is played by Gary Graham. Unlike most direct to VHS films of the 90's Graham was not cast because he had long, magnificent hair and bulbous deltoids but rather because he actually had charisma.

His opponent, fighting for a fictional eastern country (that would be Russia) is played by Paul Koslo who, despite looking like someone shrunk Ivan Drago in a hot wash, has great fun sneering and growling with a wonderfully non-specific accent.

But no-one cares about the people right? This film is called Robot Jox! If your film is about robots then you better fill it with the buggers. Not only do they do just that, but the mechanical monsters are brilliantly realised through stop/go motion and puppeteering. 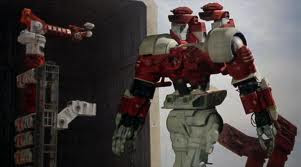 Then there is the score! Listen to this:

No film made for home release should have anything but a minimal synth score. This kind of shameless aiming high is tantamount to heresy.

Where the film does fall down, however, is its attempt to introduce futuristic sports-slang. The standard good-luck message of a Jock is a big thumbs up and an enthusiastic orating of the phrase “Crash and Burn”. Now, I can understand the “crash” bit. It's energetic, a bit destructive and implies that whoever is doing the crashing is the proactive agent, in that they will be “crashing” someone else. I can quite clearly see sports stars of the future telling each other to “get out there and crash it!”. What is problematic is the addition of the words “and burn” which clearly connotes utter failure and turns the “crasher” into the “crashee”. It is the equivalent of telling a stage performer to “break a leg”, before adding “and get gangrene...”

“...you sack of malignant bollocks”.

Telling someone to fall to the floor and burn to death does not motivate in any way, regardless of the register with which it is spoken. “Crash and burn” works not as an expression of good luck and do not attempt to use it in real life. Do not shout it out to your child during their school sports day, do not write it in a 'get-well' card and do not use it in an attempt to motivate your partner during sex. In all three cases I found it had quite opposite effect.

During production there was some dispute between writer Joe Haldeman, who wanted to make a serious piece and director Stuart Gordon, who wanted to make a big fun fantasy film. Gordon claims he was making a film for children that adults would enjoy. It is always a good tactic to slip intelligent and sophisticated elements into a children's film to keep the adults engaged while their kids whoop and howl at the lasers and robots...

Or you can just have one robot orally rape the other with his cock-sword.

This film also contains clones, a flying car and a character called 'Tex' who wears a massive cowboy hat. But these are just confectionery toppings on the dollop of ice-cream that is robot on robot wrestling. It really is worth your time if the thought of giant robots fighting excites you.

If it doesn't, I'll presume you wandered onto this site by accident. 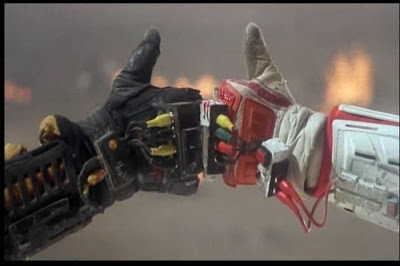